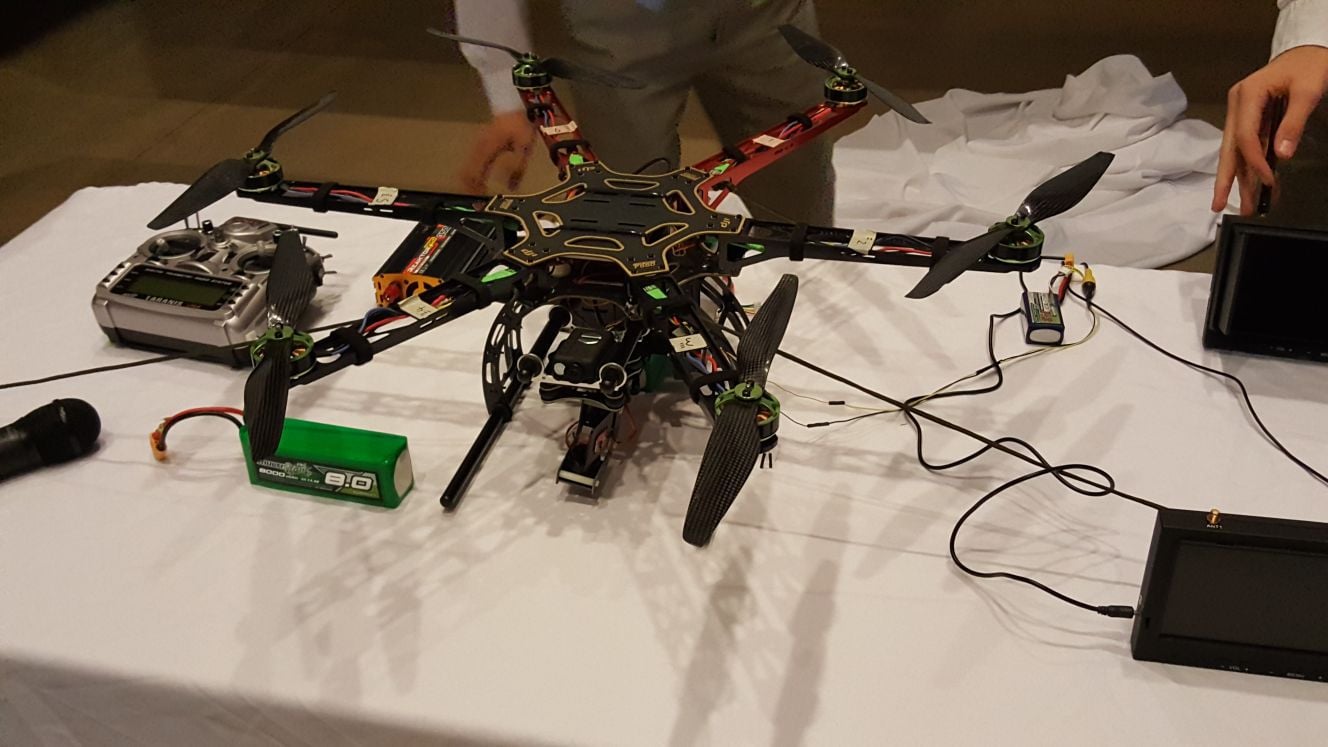 Like something out of a science fiction movie, the six-bladed SPOT-R has potential to aid in search-and-rescue missions and perhaps even save lives. 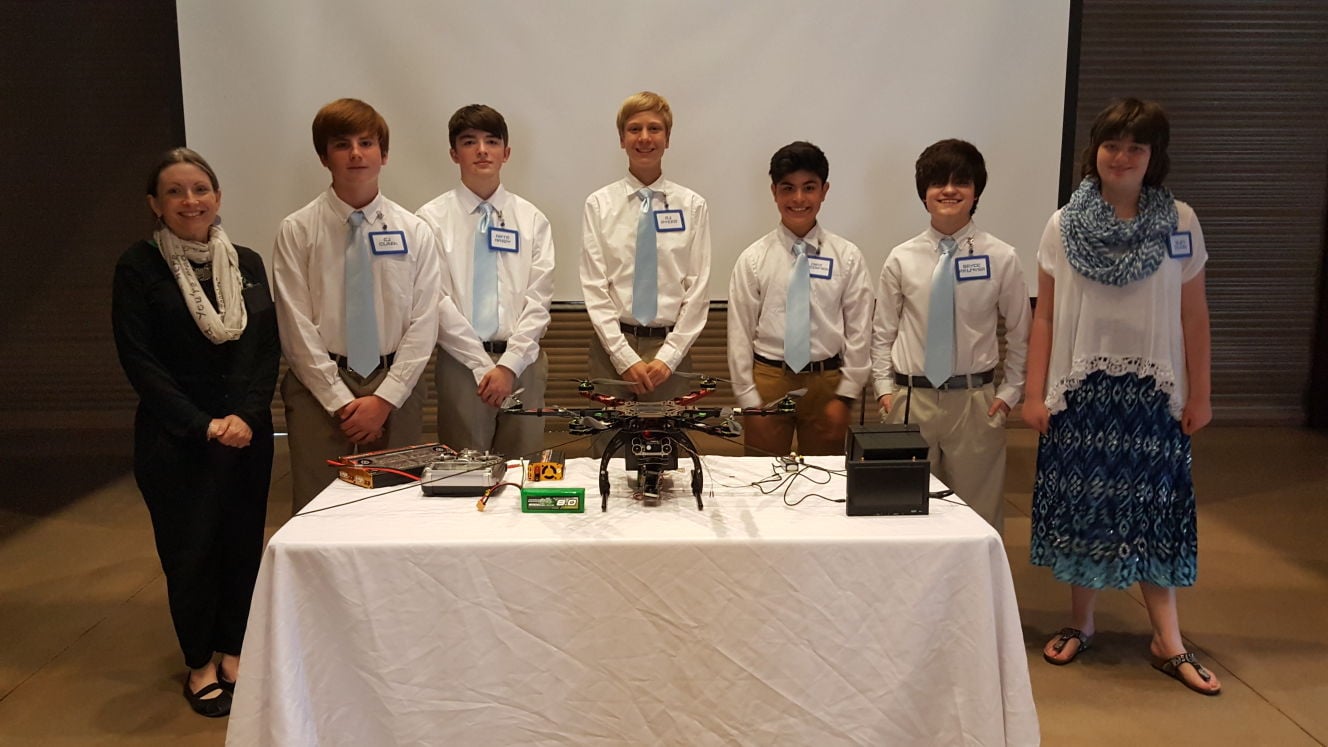 Members of the Appalachian Science Experiment display their creation during the April 21 unveiling. Team members are, from left, C.J. Clark, Nathaniel Hardy, A.J. Ayers, Chad McCormick, Bryce Palmyra and Suzy Clark. Elizabeth Hardy, far left, has devoted many hours behind the scenes to the team’s success. Team member Seth Moody could not attend the event.

Like something out of a science fiction movie, the six-bladed SPOT-R has potential to aid in search-and-rescue missions and perhaps even save lives.

Members of the Appalachian Science Experiment display their creation during the April 21 unveiling. Team members are, from left, C.J. Clark, Nathaniel Hardy, A.J. Ayers, Chad McCormick, Bryce Palmyra and Suzy Clark. Elizabeth Hardy, far left, has devoted many hours behind the scenes to the team’s success. Team member Seth Moody could not attend the event.

NEWLAND — Able to spot lost hikers with infrared vision and color cameras, zipping across rugged terrain with the airspeed of an African Swallow and winning awards at the national level. Up in the sky! It’s a bird! It’s a plane! It’s SPOT-R!

Debuted by its inventors at a special unveiling on April 21 at the YMCA’s Chapman Center, SPOT-R is a multi-rotor flying device designed and created by a team of young Avery County scientists under the name of the Appalachian Science Experiment. SPOT-R stands for “Seeking People Over Terrain Remotely” and was created to aid search-and-rescue efforts in rugged terrain characteristic of the region.

With six blades to lift the machine off the ground, an infrared camera and a color camera, SPOT-R is capable of spotting individuals lost in the woods during all seasons. This impressive piece of engineering was the brainchild of Nathaniel Hardy, C.J. Clark and Suzy Clark, who form the founding members of the Appalachian Science Experiment. In the past year, the team has expanded to include fellow scientists A.J. Ayers, Seth Moody, Bryce Palmyra and Chad McCormick.

While Hardy initially served as the technical guru in the initial team of three, C.J. Clark served as a recruitment coordinator and Suzy Clark designed an educational campaign to help children better understand how to cooperate with rescue efforts if they ever become lost. Since Ayers, Moody, Palmyra and McCormick became involved in the project, team members share a diverse range of responsibilities.

The team began work on the project in 2014, entering in the Christopher Columbus Awards competition. When that program ceased to exist in 2015, the team continued to develop the project as a part of the U.S. Army’s eCYBERmission competition, which encourages young scientists to engage Science, Technology, Engineering and Mathematics skills to help solve problems in their community.

“We had been interviewing some folks about what they thought was a big problem in our community,” C.J. Clark said. “One of them said that lost people are a big problem. Because of the mountains and the rugged terrain, we don’t have the ability to find people that we would in flat areas. So we came up with this device called SPOT-R, a multi-rotor device fitted with an infrared camera.”

The students were selected as the eighth-grade winners for North Carolina and as regional finalists. They were also awarded a grant to bring their project to life and traveled to Washington D.C. to participate in the National Judging and Educational Event, where they were awarded the Army Values Award.

“It’s really evolved over time,” Hardy said. “We’re working on stuff like the ability for people to have visual and auditory responses from the device itself or eventually maybe even two-way communication, where the person could actually speak with someone on the other end.”

The images from the camera can be streamed directly back to a command center in real time, allowing rescuers to have a better understanding of a situation long before they arrive on scene. In addition to showing images of the patient, the device can also alert rescuers to hazards that might put them in danger. The students also discussed the possibility of adding dispensers to the machine which might be capable of distributing life-saving medications.

“Say you’re five miles into the woods, its going to take at least an hour before other people can get in there and work on you. A helicopter will take time to get into the air and actually start searching. Something like this can be there and looking around in 15 minutes,” Ayers said.

When a person is injured in the woods, even a few minutes can make the difference between life and death. Through their work, these students have given the search-and-rescue community a tool which can have incredible uses and implications at the local, state and national level.