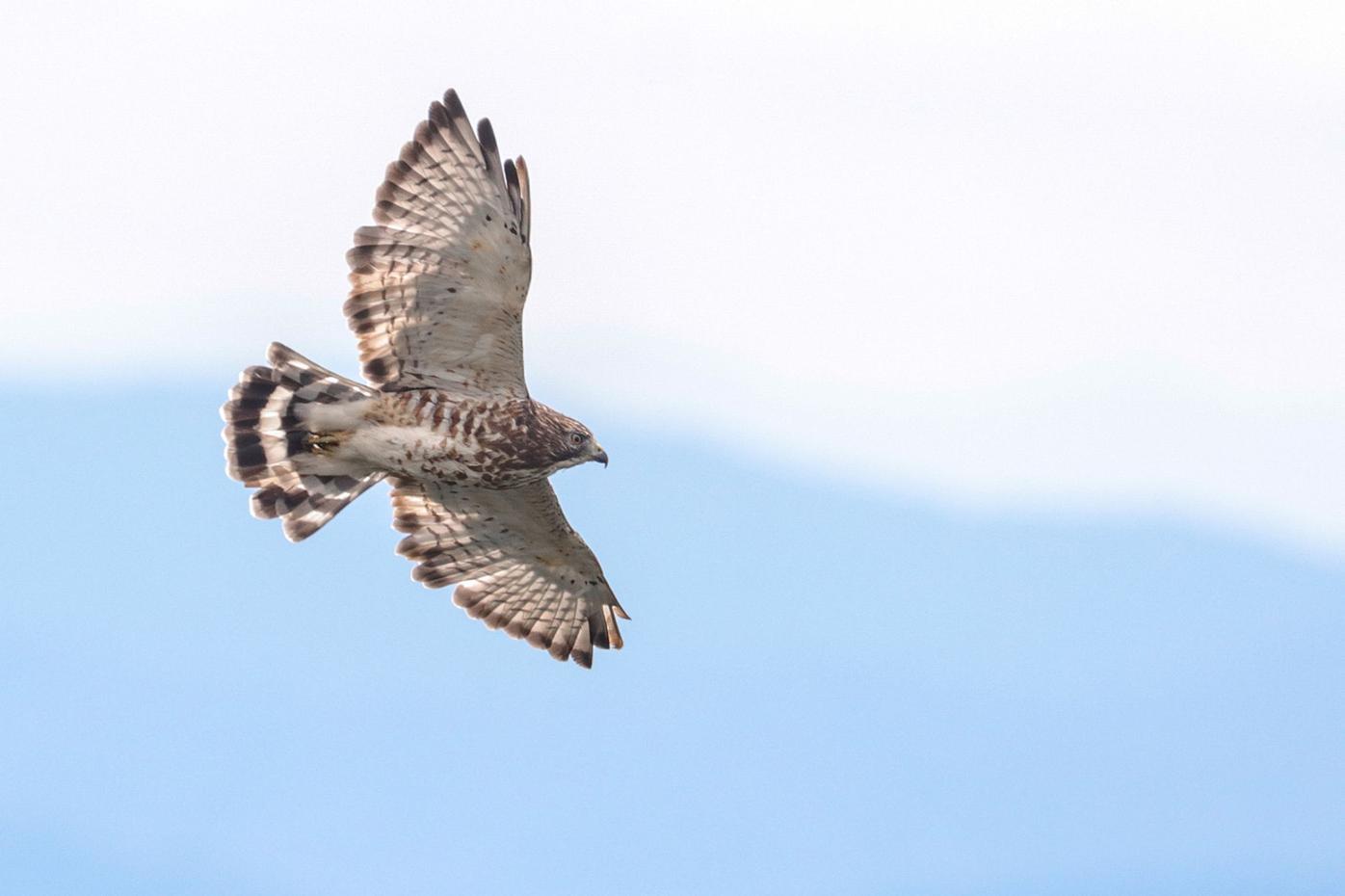 A broad-winged hawk soars over Grandfather Mountain during the annual Hawk Watch, which takes place each year during September. 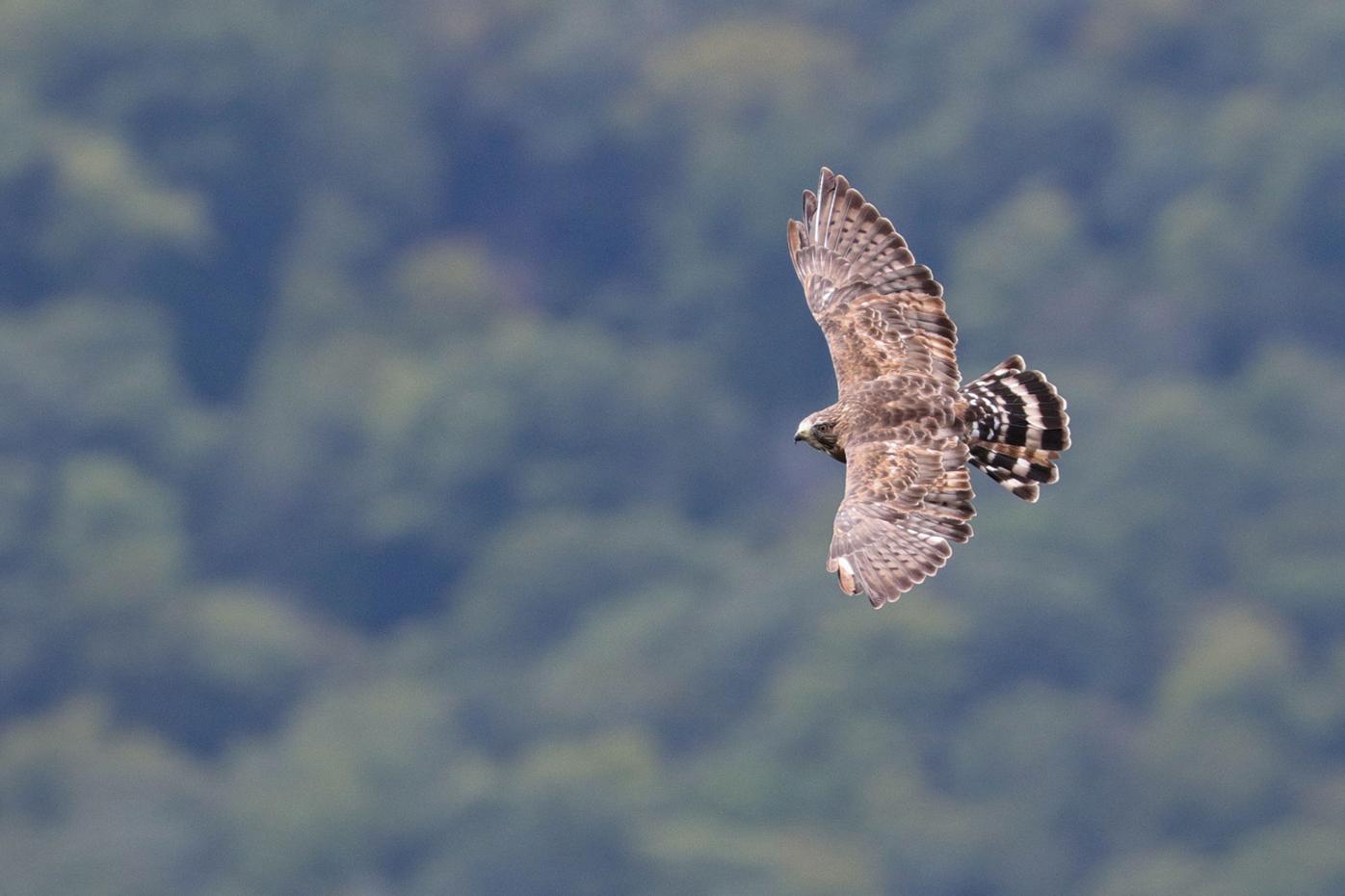 During the 2021 Hawk Watch at Grandfather Mountain, official counters tallied 1,553 broad-winged hawks (one of which is pictured) over the course of 30 days. 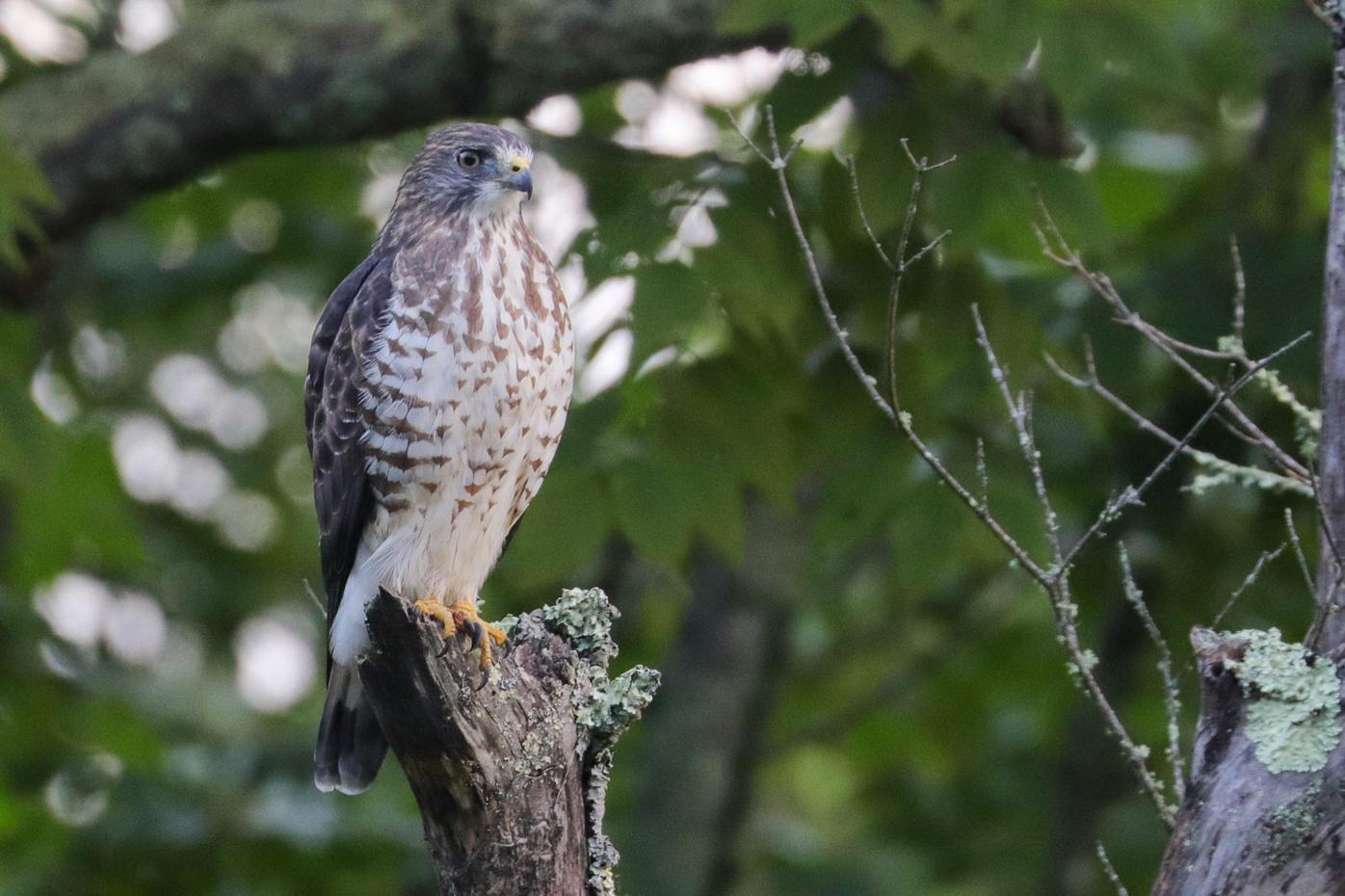 A broad-winged hawk rests during its migration South over Grandfather Mountain. Data recorded during Hawk Watch contributes to the growing body of research that allows scientists to track and record population trends among birds of prey.

A broad-winged hawk soars over Grandfather Mountain during the annual Hawk Watch, which takes place each year during September.

During the 2021 Hawk Watch at Grandfather Mountain, official counters tallied 1,553 broad-winged hawks (one of which is pictured) over the course of 30 days.

A broad-winged hawk rests during its migration South over Grandfather Mountain. Data recorded during Hawk Watch contributes to the growing body of research that allows scientists to track and record population trends among birds of prey.

GRANDFATHER MOUNTAIN — The month of September has flown by, just like the many migrating raptors that passed over Grandfather Mountain during their annual journey to warmer climates.

Raptors are birds of prey, such as hawks, eagles, owls and vultures. The telltale signs of the raptor are sharp talons, a hooked upper bill and keen eyesight. While some of these birds remain in place during winter, most will travel south, where food is more abundant.

This year, approximately 30 volunteers contributed a total of 578 hours to Hawk Watch, with Grandfather Mountain staff providing an additional 374 hours. The combined effort culminated in 1,875 raptors being recorded migrating overhead during the month of September and in early October.

The busiest day of the count came on Sept. 24, during which 442 birds were recorded migrating overhead after skies cleared and a storm system dissipated. The second busiest day came on Oct. 1, a day after the official count ended, during which counters recorded 345 birds passing over Grandfather.

The overall numbers for this year’s Hawk Watch were lower compared to previous years, said John Caveny, the park’s director of education and natural resources. Counters missed two days during what was expected to be peak migration week due to the birds bypassing the storm system by either flying over or around it.

On the day 442 birds were counted at Grandfather Mountain, another Hawk Watch site to the east counted more than 6,000 raptors overhead.

“Our numbers were lower this year than most years in the past,” Caveny said. “The reason they were lower was because we missed our big, 1,000-plus bird days. Other than that, we were right on track with what we normally see up here.”

However, the success of Hawk Watch does not depend on any particular year that a count is completed. Rather, the purpose of Hawk Watch is to accumulate a large set of data over an extended period of time in order for researchers to examine the birds’ migratory patterns and what external factors, such as climate change, may be affecting them.

“I don’t think you can look at the count on an individual year-to-year comparison,” Caveny said. “You have to look at it long-term, and that’s the purpose of the hawk count. Researchers can look at the data and examine migratory trends. They can track where birds are migrating by following where the counts are, where the birds are going and what people are seeing.”

This wealth of data has also been able to reveal population trends in migratory species, such as that of the bald eagle.

Jesse Pope, president and executive director of the Grandfather Mountain Stewardship Foundation, said that over the 13 years Hawk Watch has been conducted on the mountain, counters have consistently seen an increase in the number of migrating bald eagles.

“Bald eagle numbers since we started have dramatically increased,” Pope said. “During the first couple years of the Hawk Watch, it was big deal to see a bald eagle. In more recent years, it is not uncommon to see more than 10 in a day. So, that’s been a great trend, and it is really cool to be able to capture that in our count.”

Bald eagles were removed from the endangered species list in 2007, decades after the Environmental Protection Agency began restricting the use of DDT, a pesticide used across the U.S. to control insect crop pests, thereby entering the food chain and harming eagles and other birds. Since these conservation efforts were taken, the population of bald eagle nesting pairs has grown from 417 in the mid-1960s to approximately 14,000 as of 2015.

Moreover, counters at Grandfather Mountain continue to record healthy populations of broad-winged hawks. Even though the total number of broad-winged hawks recorded, which was 1,553, was lower this year compared to previous years due to the weather patterns, the data still contributes to the growing body of research that allows scientists to track and record population trends.

“It will be a lot more interesting when we get to 20 and 30 years of data, and I’m very excited about that,” Pope said. “When we get that amount of time under our belt, we will have a better indicator of population increases or declines based on our monitoring.”

The other raptor species that can be seen during the month, such as vultures, osprey, sharp-shinned hawks, Cooper’s hawks, peregrine falcons and others, helps keep the passion that birders have for these species flying high.

“To me, birds are the best portal into the natural world,” Merrill Lynch, an official Hawk Watch counter at Grandfather Mountain, said. “They’re everywhere, and they are totally tied into habitat. If you’re interested in how you connect the dots in the natural environment, birds are a great way to show connections between habitats, different types of places and ecologic diversity in the environment.”

The nonprofit Grandfather Mountain Stewardship Foundation strives to inspire conservation of the natural world by helping guests explore, understand and value the wonders of Grandfather Mountain. For more information, call 800-468-7325, or click to www.grandfather.com to plan a trip.

Buttigieg: 'I'm not going to apologize to Tucker Carlson'