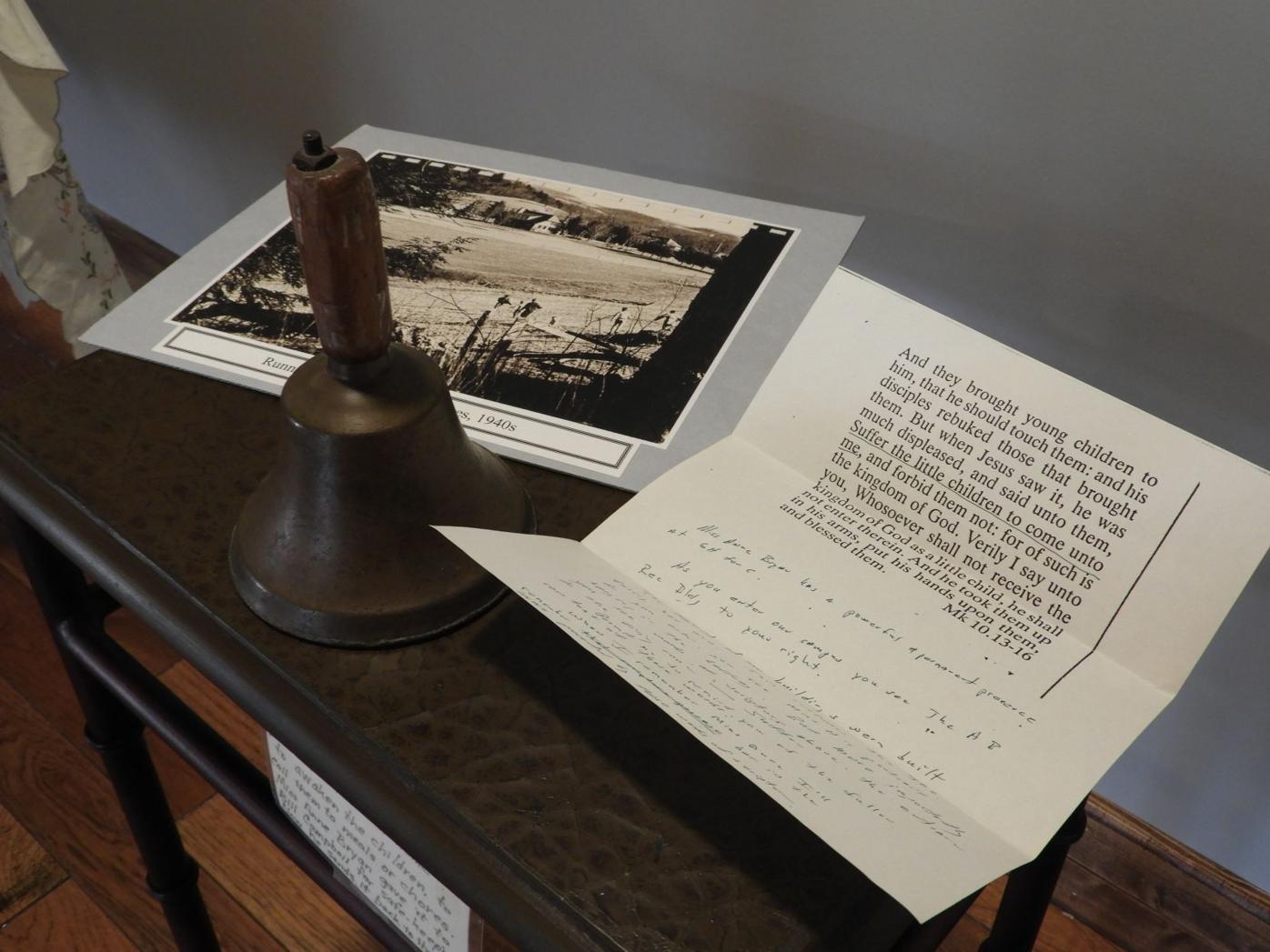 An old bell used extensively through Grandfather Home’s history sits next to a piece of scripture, Mark 10:13-16. 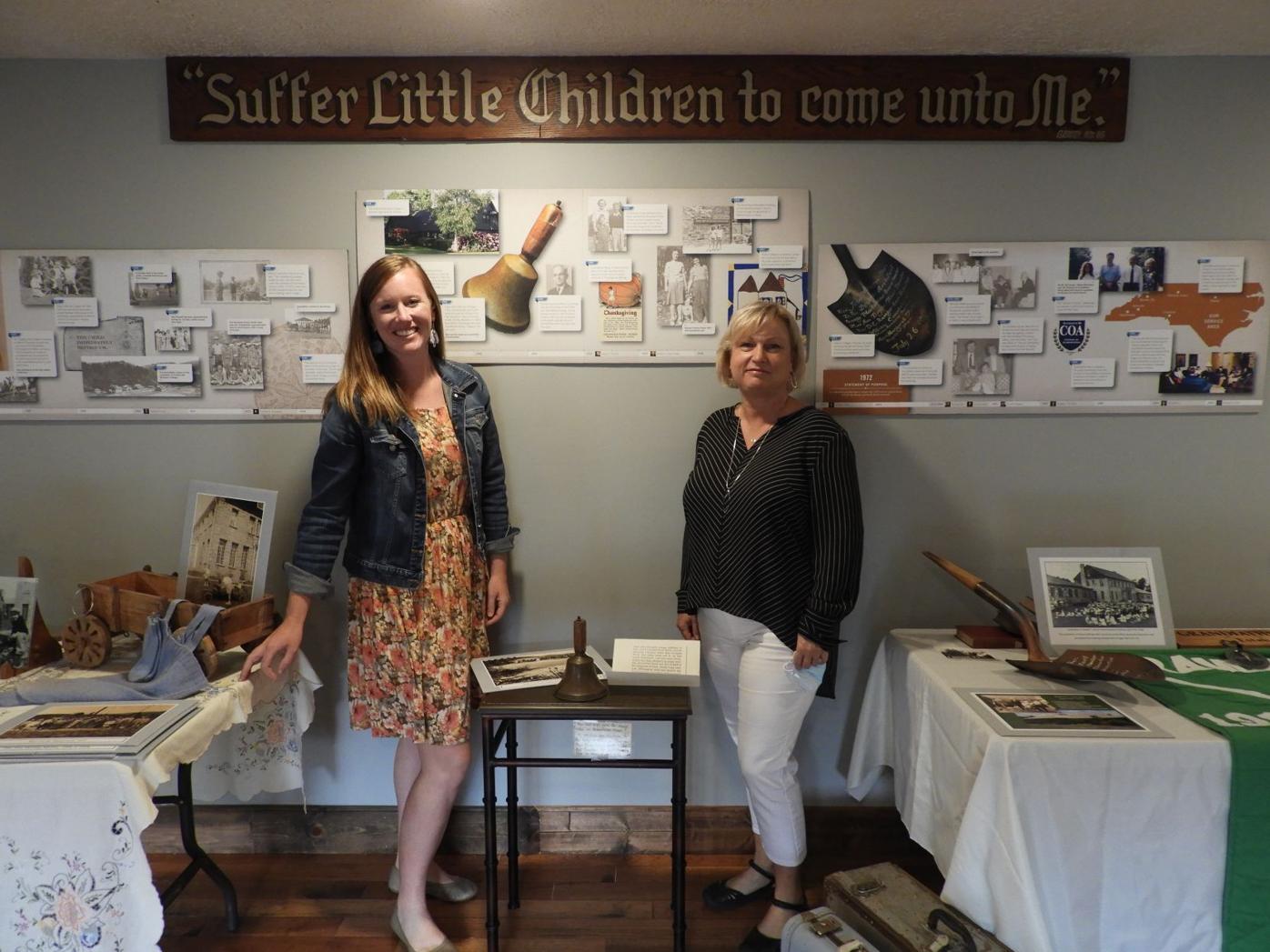 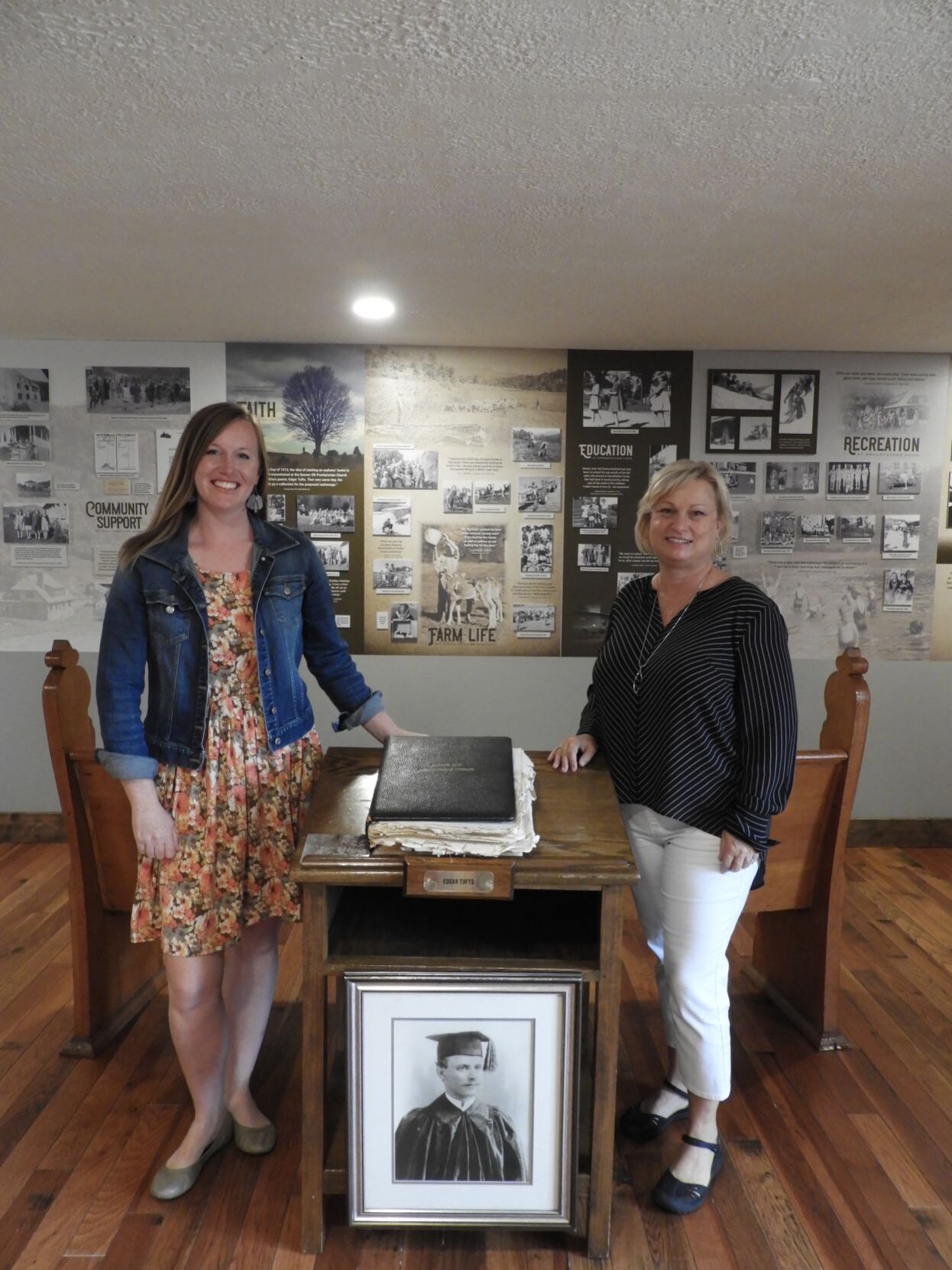 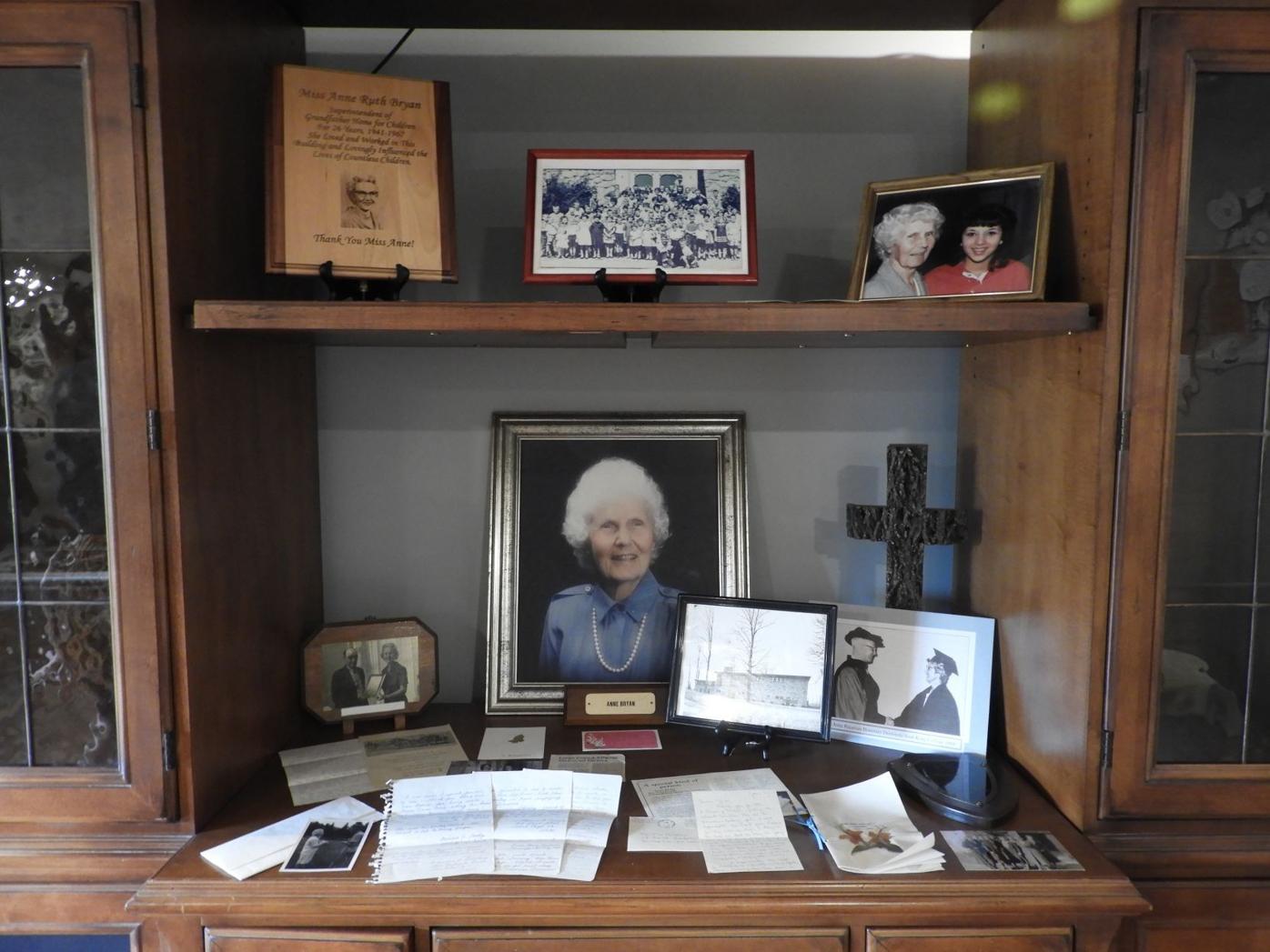 Anne Bryan, former teacher and superintendent at Grandfather Home, was a mother to many children who grew up at the home. 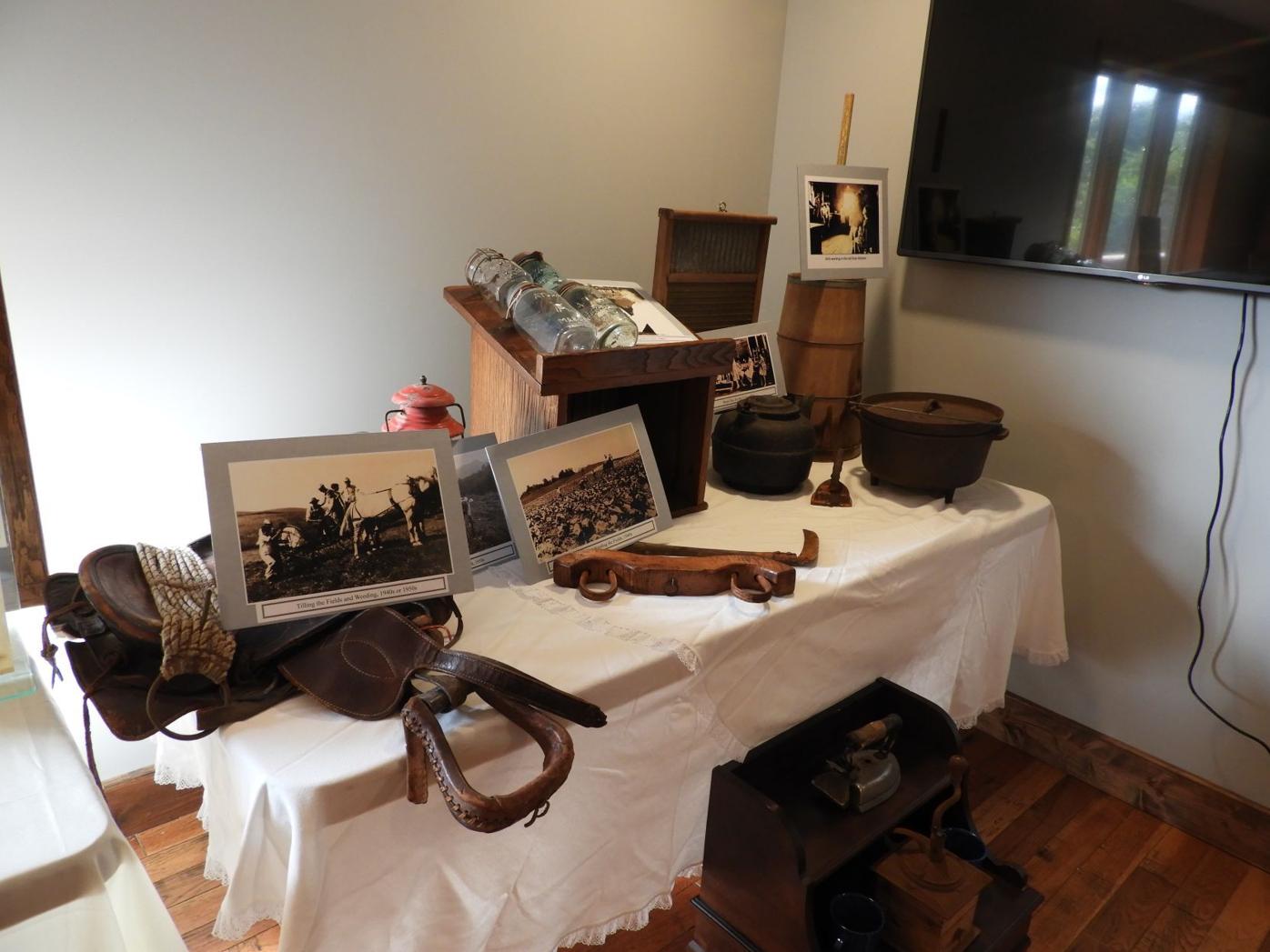 Grandfather Home’s new museum is full of artifacts submitted by the community. The home’s staff are hoping the community will keep sending in memorabilia to be put on display.

An old bell used extensively through Grandfather Home’s history sits next to a piece of scripture, Mark 10:13-16.

Anne Bryan, former teacher and superintendent at Grandfather Home, was a mother to many children who grew up at the home.

Grandfather Home’s new museum is full of artifacts submitted by the community. The home’s staff are hoping the community will keep sending in memorabilia to be put on display.

BANNER ELK — Grandfather Home for Children looks markedly different from just a few months ago due to the COVID-19 pandemic. There are currently few children on campus and just as little staff are on site roaming the halls. However, the home’s administration has been hard at work preparing to welcome children back into its storied institution.

Among the many changes that will be implemented this fall include the opening of the home’s new museum and visitors center, which will serve as a historic time capsule to commemorate the many mentors and personnel who shaped the lives of the Home’s children for generations.

“Eventually we would love this to be a space where we could have our homecoming. Usually when we have events with supporters or trying to do community outreach, we’ll go to places like a winery or other places. So we were so excited to have this space to have it be on campus and be more mission oriented,” Development Director Madison Cornwell said.

Many of the artifacts adorning the new visitors center’s facade are donated by the community, and Grandfather Home staff are hoping that more community members will continue to reach out and share their pieces of the home’s history.

Lining the museum’s walls are photos taken by the staff highlighting various aspects of children’s’ lives at the home, as well as a timeline chronicling the 100 years between the home’s founding by Edgar Tufts and the present day.

Chief among the museum’s many historical artifacts are original copies of “The Pinnacle” newsletter, a periodical detailing the early days of Grandfather Home, Lees-McRae College and Grace Memorial Hospital. While Lees-McRae is in possession of the vast majority of these historic documents, Grandfather Home has some of the most important copies. The home even has on display the original document detailing the initial plan for the construction of the orphanage.

One item in particular, a bell, is likely etched into the memory of dozens of children who lived at the home and worked at its farm. The bell was as a staple throughout this period, as it was used to summon the children for various purposes.

“A lot of alumni here say they lived by the bell. That’s what called them to chores, meals (and other activities). One of the residents, Bill Campbell, who is one of the more famous guys because he played football at Cranberry High School and was homecoming king, had the bell, and when he retired he returned it,” Cornwell said.

There is also a special area in the museum commemorating the memory of Anne Bryan, who worked at the home at the time of its founding as a teacher and eventually became its superintendent. The Home’s alumni association, which is made up of people who grew up at the home in the 1940s, 1950s and 1960s, all have fond memories of Bryan, who was like a mother to many.

“For the alumni association that we have now, she was really their mom. She had 98 kids,” Cornwell said. “Anne Bryan is the figure of (our alumni’s) life, she was their mother. They all have the most amazing stories and none of them have anything negative to say about growing up here.”

As part of the Anne Bryan display is a bulletin from her funeral. Noted in the “survived by” section is a long list of people who were once children at Grandfather Home. Cornwell is in the process of collecting the many memories and personal anecdotes of these adults who at one point in time called the orphanage home. Stories of children eating home-churned butter, sneaking off to pick wild blackberries, or of boys finishing their chores early to sneak off and watch the girls swim, and many other similar stories, will be on display at the museum in the near future.

“When I said that I wanted to hear (alumni’s) stories, they would say I arrived at Grandfather Home in 1931, and I lived there for this many years, and went there because my mom died (and so on). I loved their stories, but we wanted to hear the intimate details about their favorite memory and the best days they had at Grandfather Home. We really wanted to preserve those stories and preserve what life was like on an average day,” Cornwell said.

The Grandfather Home museum, which is part of its new visitors center, will be open to the public once the home returns to its normal operating capacity.

Since the onset of the COVID-19 pandemic, children at Grandfather Home have been moved off campus, as many are staying with foster families and relatives. Over the summer, the Home had several cottages quarantined and has not been able to admit new children into its program.

The pandemic has caused challenges for the Home since there is a higher turnover of children who come through the facility. Children stay in the home on average for three to six months. According to state mandate, children no longer stay at the home throughout their childhood. Rather they are taken in, treated, stabilized and then transitioned to a “more sustainable solution than a group home.”

“Kids were transitioning out like normal, but no new kids were coming in. You have to have the same number of staff for one kid or nine. So it’s been tough financially, and for that very reason it’s been tough on the staff. Some were scared to be exposed to the virus. Like everyone in the whole country, we’ve been struggling,” Chief Development Officer Sarah Gray said.

Gray said the Home is hoping to have campus full again once the pandemic subsides, but at the moment many cottages are empty. The Home attempted to set up a quarantine cottage to be used for kids coming in, but it presented problems of its own and has since been stopped.

Grandfather Home was able to continue its services, however, through its in-home care. The Home’s community-based services assist more children out in the community than on campus and these services have continued throughout the pandemic.

“We were helping families through Zoom calls, telehealth, front porch visits and drive-bys. We’ve done all of that, and we’re back in the homes now on a limited basis, depending on families’ exposure and whether they’ve been socially distancing,” Gray said.

Because of Grandfather Home’s success with its community-based services, it will be expanding treatment services this fall. Services will include general therapy for struggling families, expanded foster care services and treatment alternatives for sexualized kids (TASK).

The Home will also be looking to recruit for new foster homes throughout the area, hoping to add 10 new foster homes in the region in the near future. As new families enter into the foster care program, Grandfather Home will be there to provide its resources and support network to those families.

“We’re going to be reaching out to churches and organizations out in the community to find those special people willing to take on a foster child. Those are the real heroes in the work that we do,” Cornwell said.

Grandfather Home has a specialized service made up of therapists who work with kids who have experienced sexualied trauma and have, in turn, caused sexual harm. TASK receives referrals on these children and works with them to address their trauma. Typically, the program consists of about nine children and therapists who work using one-on-one sessions and family sessions throughout treatment.

“(The program) is about really honest sexual education. Primarily, it’s boys (around 10 years old)and (the program is about) learning about healthy relationships and that things they see in movies or on the internet are not actually things people want to do voluntarily, to say it nicely, and that you can cause harm and create a really unhealthy sexual relationship with someone if you don’t have healthy boundaries and healthy knowledge about sexuality,” Cornwell said.

Cornwell added that the program seeks to prevent these kids from reoffending and ending up in jail. Treatment sees these boys and other children righting their wrongs and learning to forgive themselves so they can move on and create healthy relationships in the future.

“We’re going to be serving kids who are here in the community,” Gray said.

However, with some of the changes also come hard choices. As part of its recent self-assessment, Grandfather Home will be closing Campbell Cottage, the home’s high-security residence used for treating some of its most severe cases.

“We’re going to take a pause, and there will be no kids sleeping on Grandfather Home’s campus for a short period of time. You think about the negatives of COVID all the time, so we’re looking at this as a positive to say, ‘We’re going to take a step back for second and really think about what this community needs and how we can help,’” Cornwell said.

Meanwhile, the Home is beginning outpatient services on campus and will have children visiting the Home for therapy, with some therapists doing home visits as well.

“People want us to be the old orphanage. They want to see that sort of thing, but nothing looks like those days anymore. One of our board members said, ‘(The changes) in my mind are a positive because that means we’re doing what we’ve always done: meet the child now before us,’” Gray said.

Diego Mentrida: The act of sportsmanship that made Will Smith cry

Why this Irish town is supporting Joe Biden

Dwayne Johnson rips down gate after getting trapped in driveway