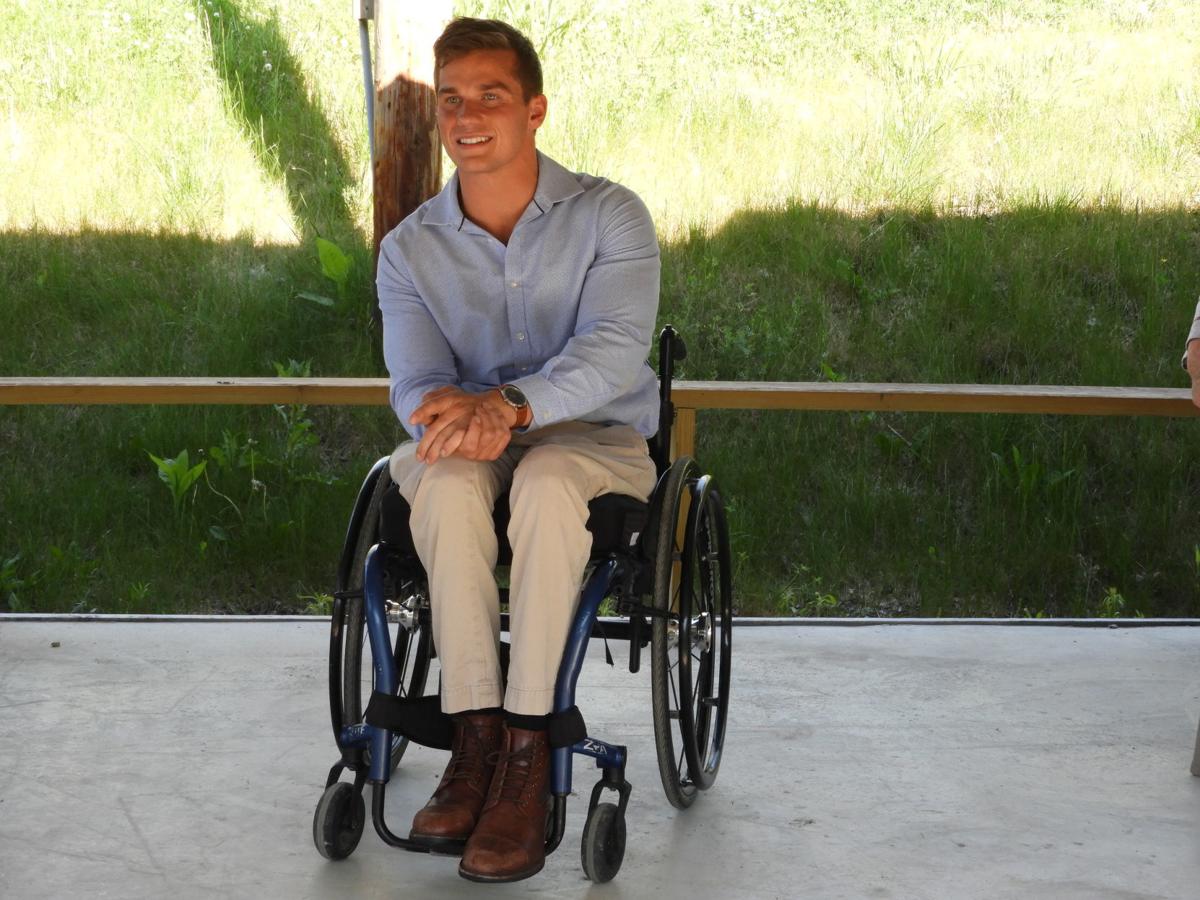 Madison Cawthorn, candidate for Congress, gave his stump speech to a crowd gathered at the Cranberry picnic shelter on Tuesday, June 2. 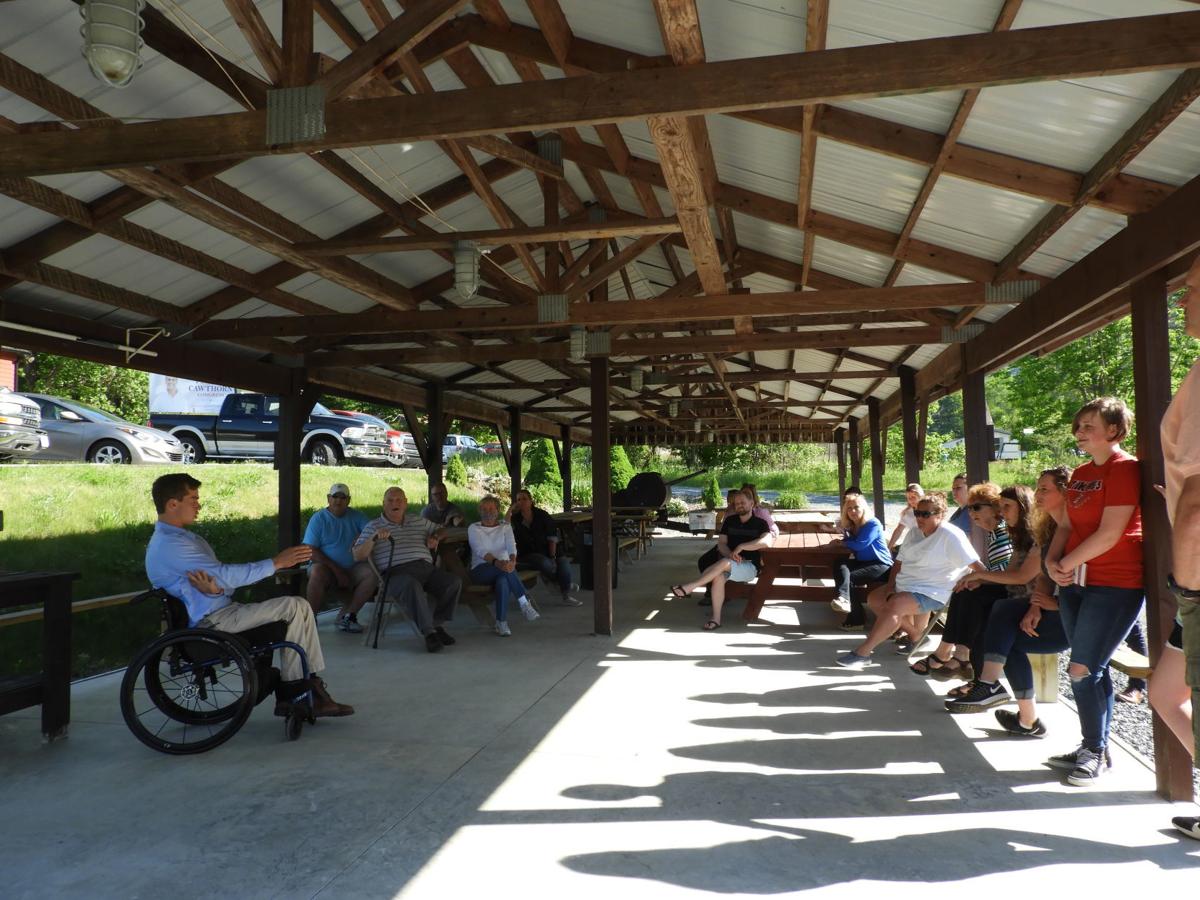 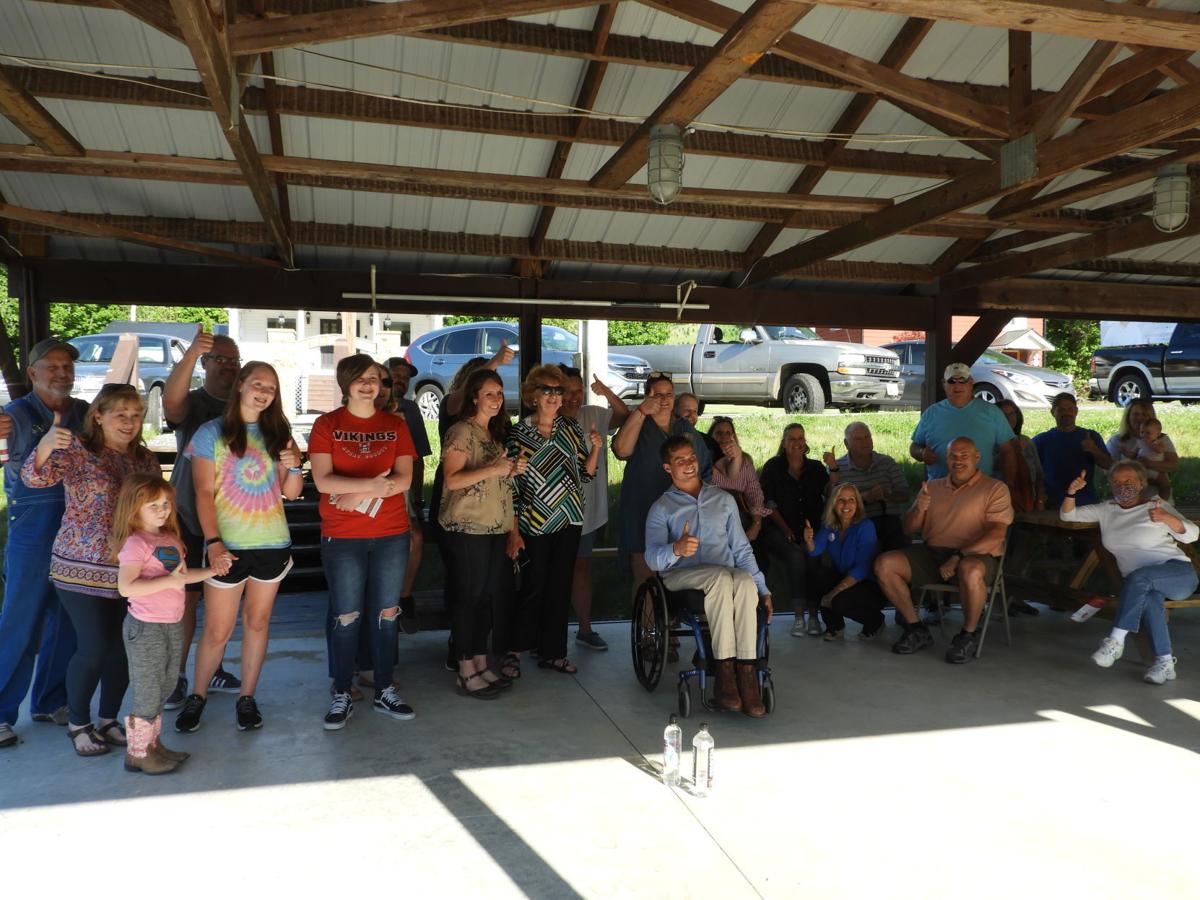 Congressional candidate Madison Cawthorn took a group photo with potential voters during a campaign stop at the Cranberry picnic shelter on Tuesday, June 2.

Madison Cawthorn, candidate for Congress, gave his stump speech to a crowd gathered at the Cranberry picnic shelter on Tuesday, June 2.

Congressional candidate Madison Cawthorn took a group photo with potential voters during a campaign stop at the Cranberry picnic shelter on Tuesday, June 2.

CRANBERRY — Madison Cawthorn and Lynda Bennett are running in the Republican Second Primary for North Carolina’s 11th Congressional District on June 23, and in order to drum up support, Cawthorn visited Cranberry the evening of Tuesday, June 2, to speak with local voters.

The second primary was initiated after neither candidate secured 30 percent of the vote to win the primary outright. Cawthorn received 20.4 percent of the vote, while Bennett received 22.7 percent. Incumbent Mark Meadows did not seek election after being appointed White House Chief of Staff.

Cawthorn said that he is prepared to take over a congressional seat that has garnered much influence during the Trump presidency. Cawthorn’s main policy platform would be to provide infrastructure to western North Carolina.

“I really want to get internet service to every house in this area,” Cawthorn said. “In the 1930s we had the [Rural] Electrification Act that set up a framework to give electricity to every house, but I think we could do the same thing with broadband.”

NC’s 11th District encompasses nearly all of western NC, in which low income and economically distressed areas are more likely to not have access to broadband. The most underserved area stretches from Cherokee County to Henderson County.

If Cawthorn were to be voted to office, he contends that he would advocate for a private-public partnership in which the federal government would offset the cost, be it through tax breaks or subsidies that the communications company would incur when installing the fiber optic cables.

“They would need to offset their costs because the wires go bad in about 30 years and they wouldn’t have been able to pay for themselves,” Cawthorn said.

Cawthorn describes himself as the business and opportunity candidate. Cawthorn previously owned and operated his own real estate investment company in which he would flip foreclosed properties. He has also been an advocate for the Opportunity Zones created in 2017 by the Trump administration’s Tax Cuts and Jobs Act, which allows investors to defer capital gains taxes by investing in Qualified Opportunity Funds that target investment in areas of the country that need it most.

“I think that we [should] expand those opportunity zones throughout western North Carolina,” Cawthorn said. “What that means is that it becomes very profitable for somebody to invest, refurbish a factory or open a business here. [The fund holds] a long-term investment here that creates jobs for our people, but [the investor] gets a giant return on their investments because they pay very little taxes on it.”

There are about 18 Opportunity Zones in District 11, with the western end of Avery County, including Elk Park, Minneapolis and Plumtree, making up a zone.

If Cawthorn were to win the election in November, he would join a small group of leaders and politicians who served their country while dealing with physical disability, leaders that include Senators John McCain and Bob Dole, as well as President Franklin Delano Roosevelt.

Cawthorn is paralyzed below the waist and is confined to a wheelchair. While riding in the passenger seat of a vehicle, the driver fell asleep at the wheel and crashed into a concrete wall at a speed of 70 mph. That same year, in 2014, Cawthorn had been nominated to attend the U.S. Naval Academy by Rep. Mark Meadows.

“My entire life was changed in an instant, which is really sad because, you know, I couldn’t even fight back. I was asleep. My body was destroyed, and I had a one-percent chance to live,” Cawthorn said. “Going through that much hardship and adversity instilled in me a grit and this spirit of, ‘You can’t beat me. I’m indomitable.’ I’ve gone through so much, and it’s like building up a callus of never giving up, never backing down.”

While Cawthorn admits that he wishes that he had not gone through his experience, he recognizes the ordeal has taught him many valuable lessons.

“This has really taught me how precious time is. We really never know when our last day is going to be. We could be taken away from our families, from our dreams, from our loved ones any moment. That’s why I’m running for Congress right now,” Cawthorn explained. “I’d love to run for Congress when I’m older, but I don’t think it’s the amount of years on this Earth that defines wisdom or gravitas, I think it’s about what you’ve done with the time you’ve been given.”

At 24 years of age, Cawthorn would become the youngest member of Congress in U.S. history if elected. The current representative who holds that title is Alexandria Ocasio-Cortez (D-New York).

As a fan of President Ronald Reagan, Cawthorn said he is prepared to address his political opponents in the event that, in quoting the former president, they attempt to “exploit for political purposes my opponent’s youth and inexperience.”

“At the day of the signing of the Declaration of Independence, the guy who wrote our constitution, James Madison, was 21 years old. The guy who signed the Declaration of Independence, who designed our entire economic system, Alexander Hamilton, was 21 years old. I want to be a servant to the people, and in times of hardship and in critical times, leaders step up,” Cawthorn said.

Cawthorn said, if elected, the only people he wants to be accountable to are the people of western NC.

In-person early voting in Avery began on June 4 and will continue through Saturday, June 20. Voters will be able to cast their ballot at the Avery County Board of Elections office, accessing the office via stairs or elevator upon entering through the Avery Co. Sheriff’s Office. To reduce the spread of COVID-19, in-person voters are encouraged to wear face masks while they vote and wait in line.