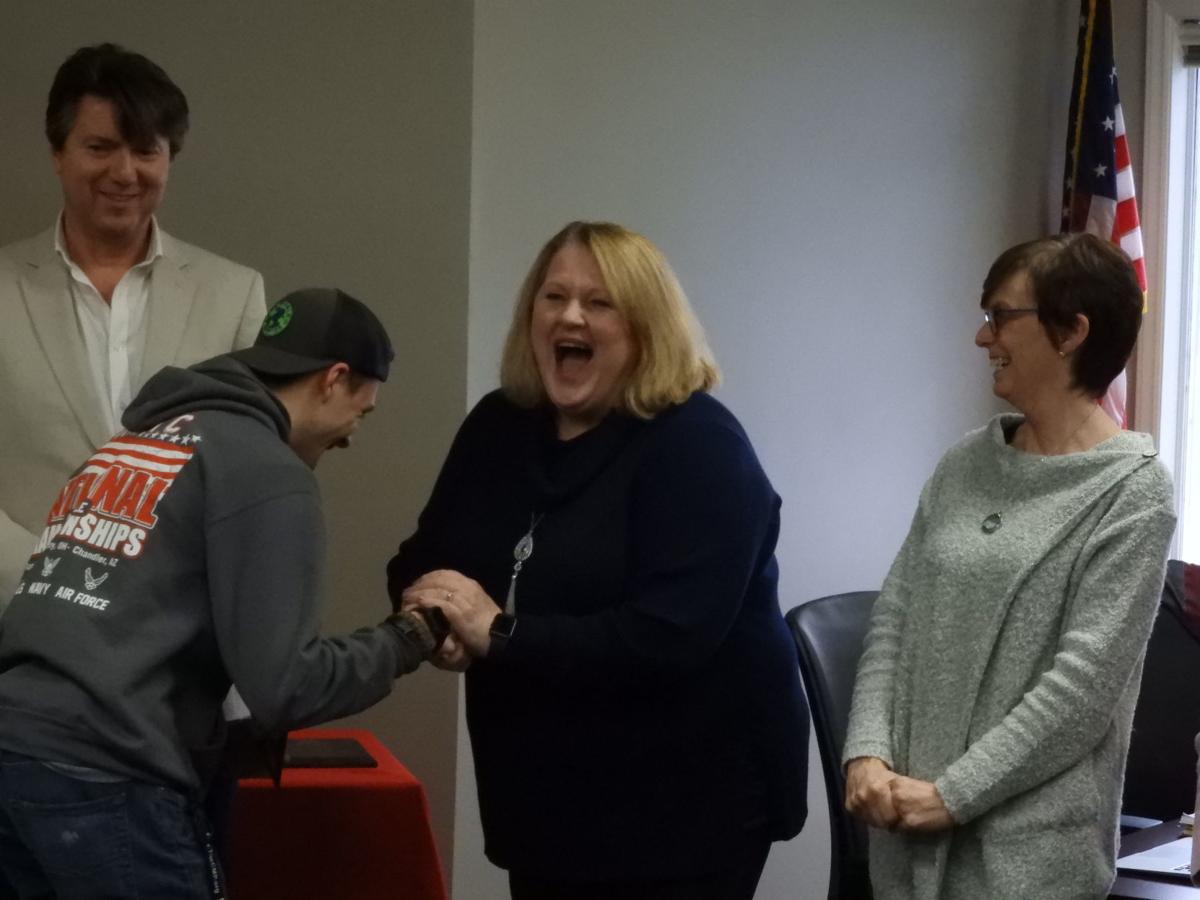 Avery County High School JROTC Army Nationals fourth-place rifle winner Kristopher Calhoun jokes with board of education member Kathey Aldridge while he was being recognized during the BOE’s March 10 meeting. as board members John Greene and Jane Bumgarner look on. 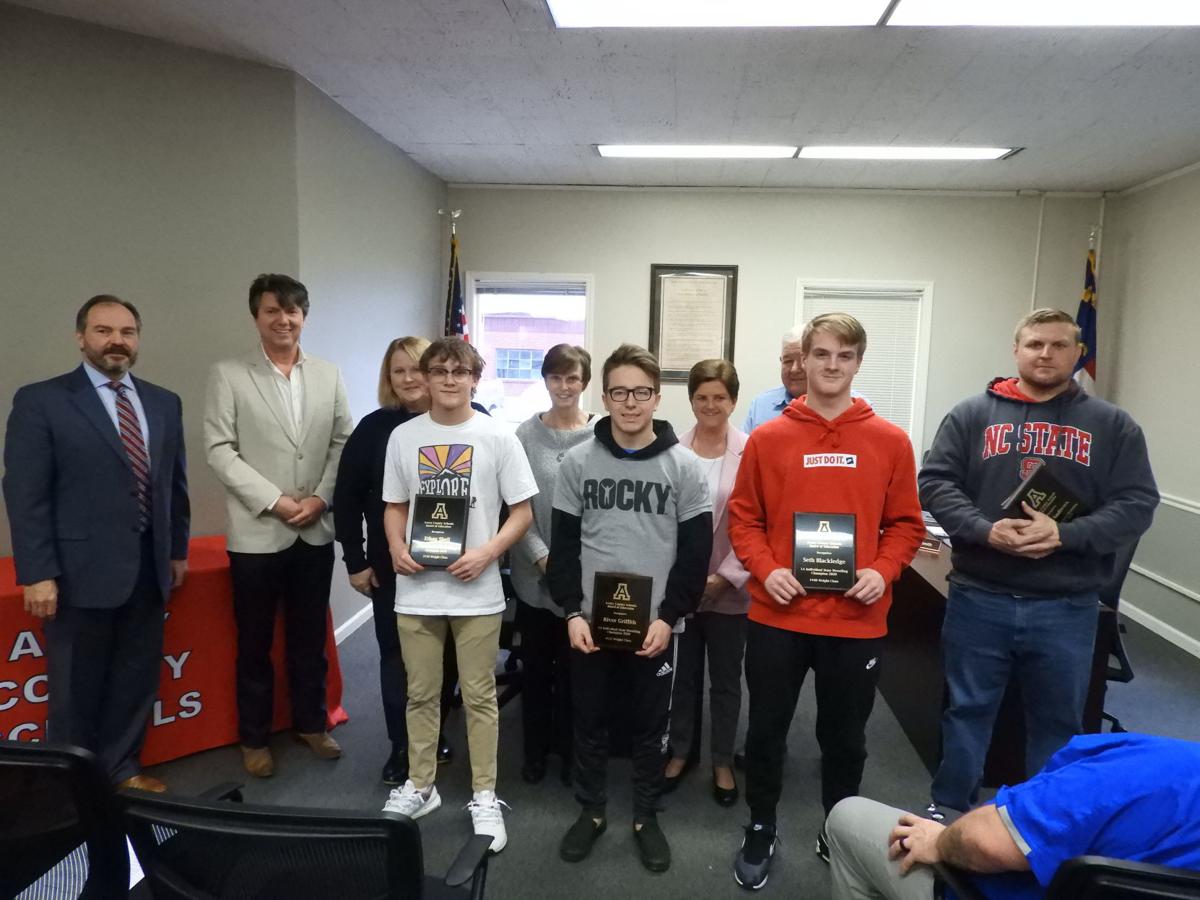 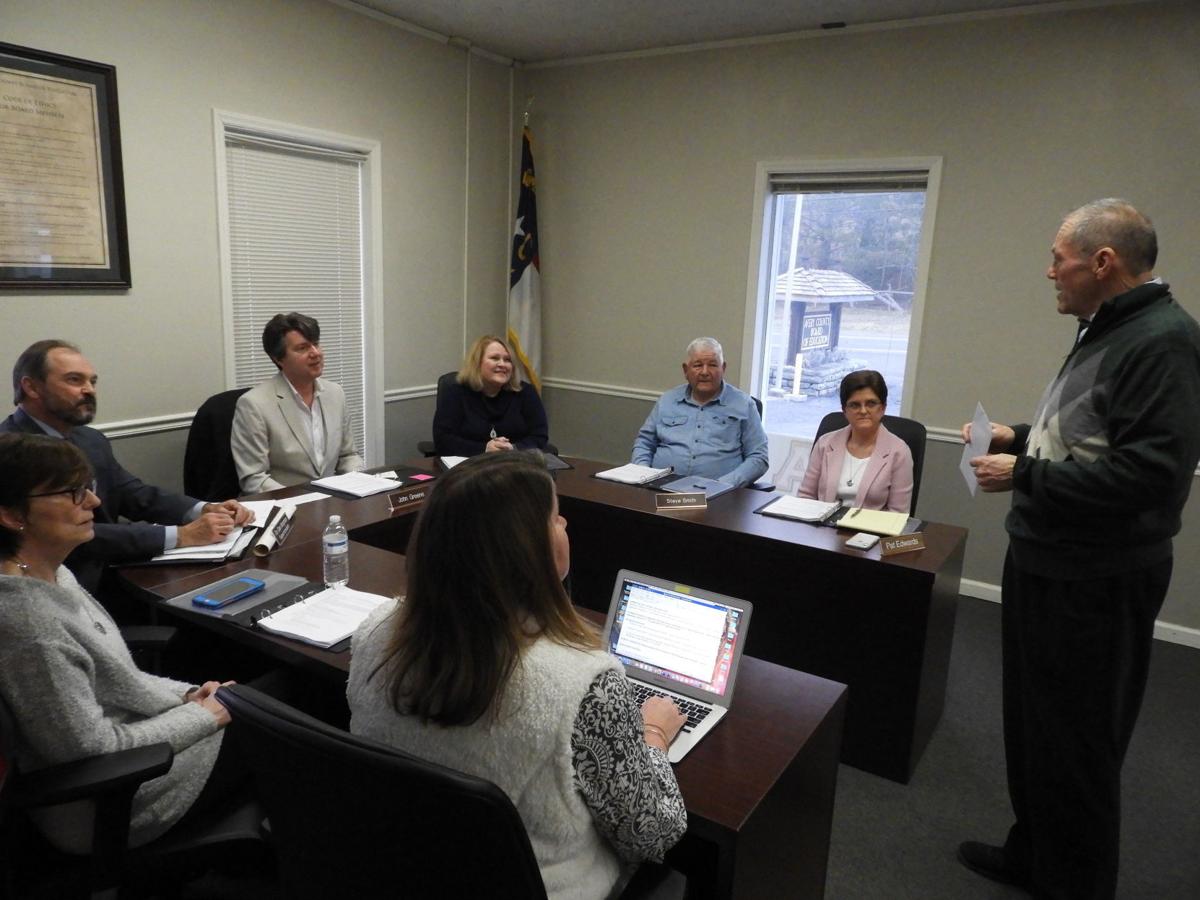 Avery County Charitable Foundation Director Jim Swinkola presents to the Avery Board of Education a $5,000 donation to the SCOTTIE Bus Program provided by the Kiwanis Club and ACCF.

Avery County High School JROTC Army Nationals fourth-place rifle winner Kristopher Calhoun jokes with board of education member Kathey Aldridge while he was being recognized during the BOE’s March 10 meeting. as board members John Greene and Jane Bumgarner look on.

Avery County Charitable Foundation Director Jim Swinkola presents to the Avery Board of Education a $5,000 donation to the SCOTTIE Bus Program provided by the Kiwanis Club and ACCF.

NEWLAND — The Avery County Board of Education on Tuesday, March 10, got under way with the recognitions of several high-achieving students who were recognized by board members and Superintendent Dr. Dan Brigman.

“This is the best part of our board meetings when we recognize students that have accomplishments in the Avery County School system because we have some individuals knocking the socks off things, hitting targets and tackling opponents, and the list goes on and on,” Brigman said.

Avery County Charitable Foundation Director Jim Swinkola also presented to the board a $5,000 donation to the SCOTTIE bus program. The donation comes from the Kiwanis Club and ACCF, respectively. The Supporting Children’s Opportunities Through Technology Program provides a mobile pre-K literacy program to children who are not enrolled in pre-K.

Official business continued as Career and Technical Education Director Ellis Ayers gave an update to the board on the recent changes that have been made to high school graduation requirements.

In 2019, the N.C. Legislature passed an introduction to economics and personal finance class, both of which will be part of the new four-course social studies requirement to graduate. These classes are not the same as career and technical education classes.

“By state law [the N.C. Legislature] can only require four courses in one area for graduation,” Ayers said. “Our juniors will continue their four-year sequence. They will have a civics course, a world history course and two U.S. history courses.”

Freshmen and sophomores will now take Foundational Principles of the United States of America and North Carolina Civic Literacy.

“So [the state has] taken some of the civics curriculum, and they’ve reconfigured some of the American history and they’ve put it into one course, and there’s also the economics and personal finance courses,” Ayers said.

As of press time, the school system has since suspended classes for two weeks starting on Monday, March 16, at the direction of Gov. Roy Cooper’s executive order issued in response to the developing COVID-19 coronavirus situation.

“We have a working partnership with our local health department, and we communicate with each other so we don’t cross wires,” Brigman said. “As with any flu season, it is important to practice several things such as washing your hands, limit your hand shaking and don’t touch your face. Our custodial staff will continue doing a great job to make sure that all door knobs and bathrooms are wiped down and washed down daily. Practice good hygiene.”

Construction liaison Mark Parlier gave an update to the board on the ACHS construction project in which he mentioned that the construction will be able to be seen by the road soon. While weather continues to play a factor in the project’s progress, Parlier said that concrete flooring will be ready to be poured after several days of sun, the water line tie-in has been started and the mechanical room slabs will also be poured soon. The engineers are also looking at what doors will be needed to be controlled by a key card.

“I asked [them] ‘Are we still at the same date?’ [The engineer] with the branch said that they are having a meeting next week, and he will know by the time we have an owners meeting. My guess is that we’re pushed out a little further than we were because of the weather,” Parlier said.

Board member Steve Smith reiterated, “We can’t just let them keep pushing us around. They’ve moved it two times. We have to have a date.”

A look ahead: Warm and wet in the East while hot and dry in the West