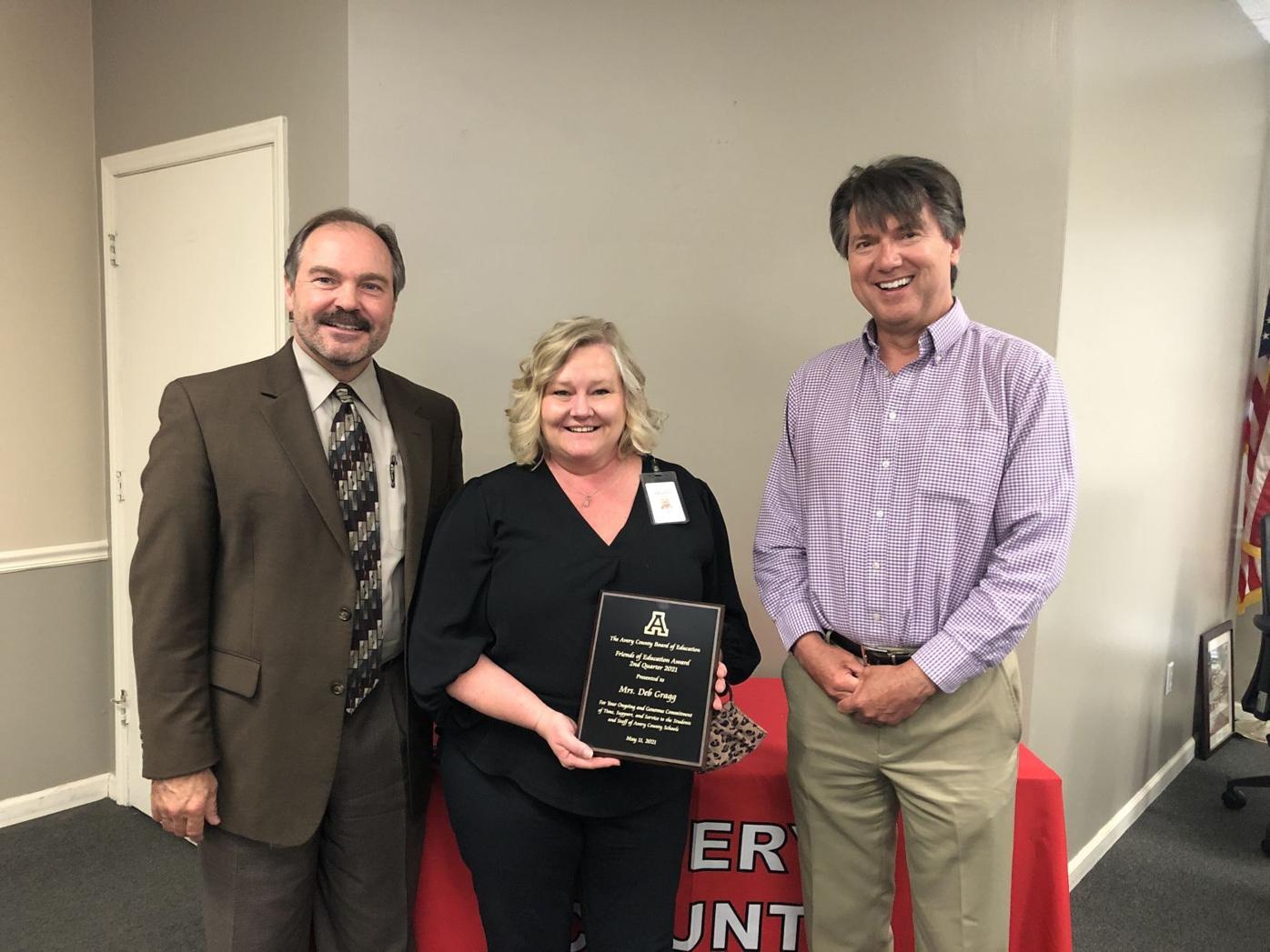 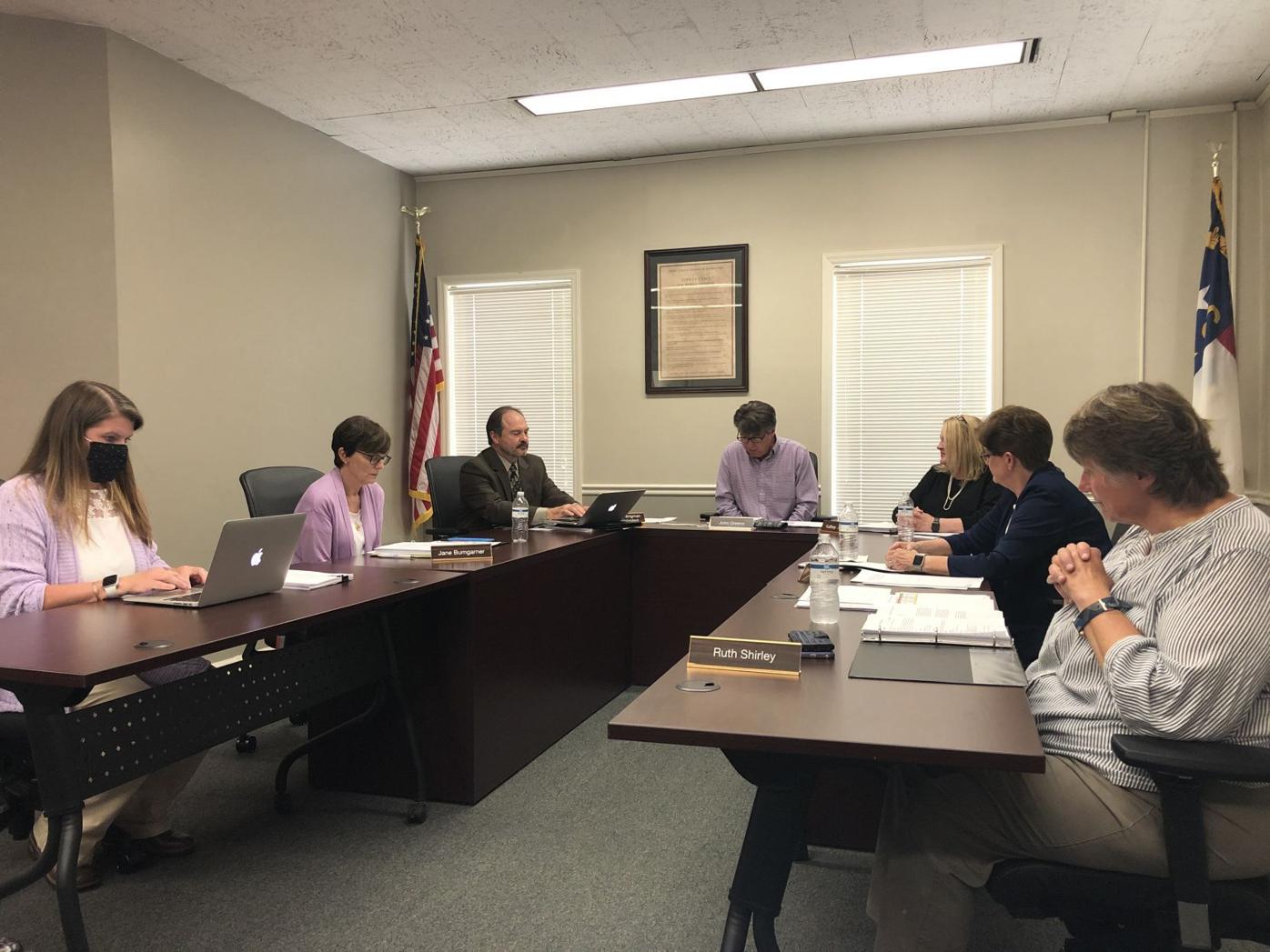 The Board of Education held its monthly meeting on Monday, May 17.

The Board of Education held its monthly meeting on Monday, May 17.

NEWLAND — The Board of Education discussed details regarding the end of the school year, as well as received the latest update on the progress of the Avery High School construction project during its Monday, May 17, meeting at Avery Central Offices.

For the first time in more than a year, the board welcomed back principals and directors to attend its monthly meeting in person. After the approval of the evening’s minutes, Superintendent Dr. Dan Brigman updated those in attendance on important upcoming dates.

Mayland Early College High School will holding its graduation at 7 p.m. on Tuesday, May 18. Out of 30 graduates, there are four students from Avery County, and one of them, Esmeralda Lucas-Ramirez, is the Class of 2021’s salutatorians, or the student who ranks second highest in the class and delivers the salutatory.

There are seven and a half days of instruction remaining in the current school year. The last day is set for Thursday, May 27, which is also the date for high school graduation. Like last year, the ceremony will take place at MacRae Meadows at Grandfather Mountain, although the time has been pushed back to 5 p.m. There are 146 students, in addition to 21 early graduates, who will make up the class of 2021.

“It has truly been a successful year when you look at the accomplishments of this past year,” Brigman said.

Meanwhile, End of Grade (EOG) and End of Course (EOC) tests are ongoing, and furniture in pods 100 and 200 at the high school have begun to be removed ahead of the demolition of the two buildings later this month. Summer school is set to begin on Monday, June 7, with 187 students set to attend one or both sessions. Invitations were sent to all students in order to provide an opportunity for students who may have fallen behind academically due to the pandemic to catch up.

As the next order of business, Dr. Brigman and the BOE recognized Debbie Gragg, Public Health Nursing Supervisor for the Avery County Health Department, with the Avery County Friends of Education Award for her work and commitment to the health and safety of students and staff during throughout the pandemic.

“You’re a blessing to us and the whole team at the Avery County Health Department. This is very deserving of you. Not only did you start off day one communicating with our leadership teams, Mrs. Brigman, myself, principals and everybody, but you never said no. You have always been a problem solver for us to do what was in the best interest of our staff and students and our community. For that, we thank you very much,” Brigman said.

After the plaque was presented, Pamela Tolley presented her public comments to the board. Tolley spoke positively about Avery Virtual Academy and said that the online education platform, which was implemented to provide students an alternative to in-person education during the pandemic, has been beneficial to her son.

“The virtual academy has been just awesome. The teachers have worked themselves to death just trying to get things through. They’ll be available for us if we need them. All we have to do is email them, and they’ll have a private, one-on-one Zoom with (the student) if they need extra help. AVA has just been a godsend to us this year,” Tolley said.

The board then promptly approved a JROTC field trip, who will be going to a competition in Anniston, Ala., from June 13 to 18.

Johnson informed the board that the turning on of the school’s permanent power is imminent, the last piece of glass to be installed in the upper commons area is set to go in later this week and pieces to the school’s metal roof are set to arrive on June 10. Johnson added that the interior of the school is progressing, as laying of block filler, paint and tiles are ongoing.

Additionally, the terrazzo, or floor patterns, are set to be poured throughout the building, starting at the upper classrooms before finishing at the mid-level commons area. August 5 remains as the ultimate certificate of occupancy date, but starting on July 23, inspections will be completed incrementally throughout the project site, allowing for furniture to be moved into the building in stages instead of all at once.

Executive Director of Academic Services Ellis Ayers presented a proposal to the board for several Career and Technical Education (CTE) courses to count as honors credits. The courses include Drafting I, Biomedical Technology, Engineering Design, Technology , Engineer and Design, Marketing, Health Science I, Health Science II, Agriculture Applications and Horticulture I.

“We had a number of our different courses that were not offered for honors credit, which was a barrier for some students to take a course in what they’re passionate about, because they were concerned about GPA,” Ayers said.

The board then received several several budget amendment requests from Finance Officer Jeffery Jaynes. Jaynes also updated the board on the replacement of the school system’s fuel tanks. The tanks have been pumped dry, and demolition is set to begin later this week. After a six-week process, the school system will be in possession of a state-of-the-art fuel system.

The board approved several agenda items, including revising the organizational chart, the summer At Risk Afters School Meal Program, the inclusion of several CTE courses as honors courses, bid rollovers for child nutrition, as well as transportation requests for the Upward Bound Summer Program and the 4-H Summer WOW program.

As the last order of business, Jaynes presented several change order requests to the board related to the Avery High School project. Jaynes said that because of the placement location of the existing pipes coming out of the 300 pod, the location of the pipes entering into the new building ended up being lower than originally designed, which will require a bulkhead to be added to the wall below the ceiling grid to avoid the pipes from being visible.

The other request had been approved by the board but had not yet been released to the contractor. Jaynes explained that the contractors will essentially need to wall off the areas around the 100 and 200 pods once they are demolished to prevent anyone from potentially walking into a hole in the ground.

“In order for us to have temporary occupancy, and ultimately permanent occupancy in September, that area has to be closed because we can’t allow students or adults to end up walking into the abyss, because that area is where the demolition will occur. Once the pod is down, there will be a big hole there. So it has to be closed off,” Jaynes said.

The other is located by the 300 pod, which will also have to be closed off temporarily while the renovation is being completed inside the 300 pod so no one can gain access to the construction area who is not authorized to do so.

“My issue is the scope and sequencing of this project hasn’t changed. The only thing that really has changed at this point is the date. We should have been doing this a year ago. The scope and sequence has always been that there should be a period of time where we got a new building occupied and an old building demoed and renovated,” Jaynes said. “There had to be a plan in place to temporarily seal and close off this area. The issue at hand is that they simply can’t put up a two-by-four and a piece of plastic.”

Jaynes reported that the Fire Marshal is requiring a more substantial plan since the structure must be fireproof, adding that he is not releasing the change order request to the contractor until he can provide to the board the contractor’s initial plan to build the wall and seal off the doors at the critical locations during this phase of the project.

The change order comes in at $12,718 to put in a temporary wall, which will be torn down once the permit is issued. Board member Kathey Aldridge said that the board is essentially having to pay for something that the contractors should have planned for. Jaynes said that by law the contractor does have the right to request a change order if an inspections office or other agency requires something that was unexpected or out of their control. Jaynes added that he did not want the issue to reflect negatively on the school system.

The board met in closed session before adjourning.

Editor's note: This report is an update from its original version to reflect the correct name of the Mayland Early College Salutatorian.