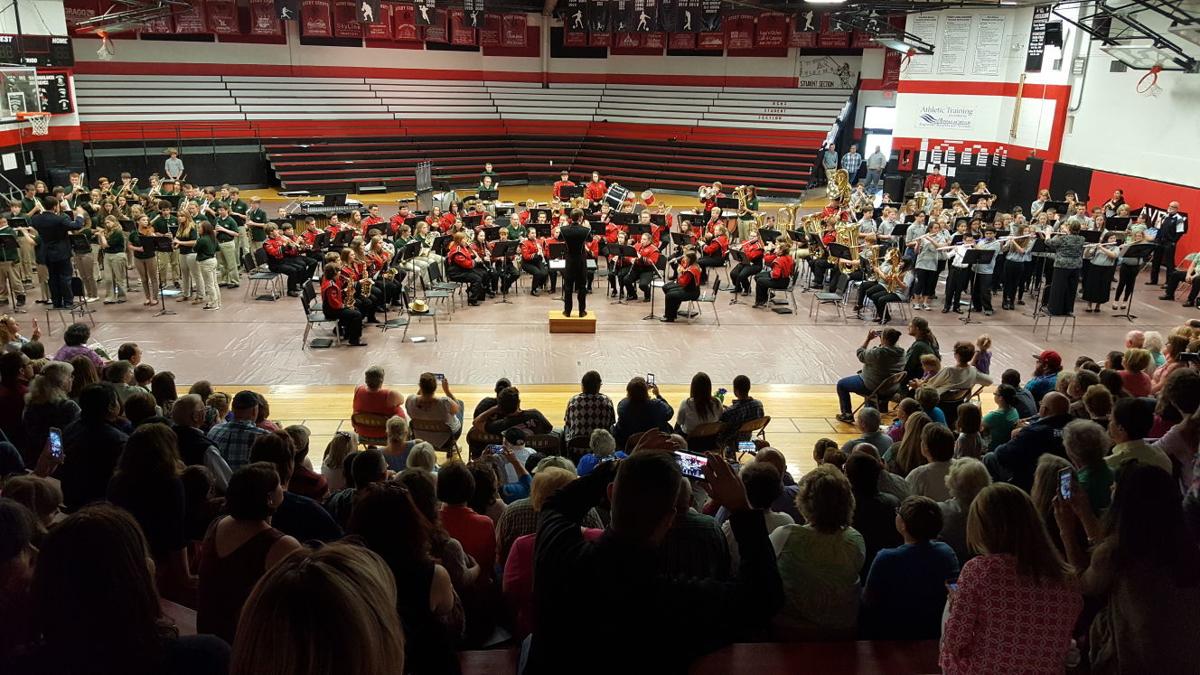 Together nearly 200 strong, the bands of AMS, CMS and ACHS joined together for a grand finale, playing Brian Balmages’ “Gettysburg.”

Together nearly 200 strong, the bands of AMS, CMS and ACHS joined together for a grand finale, playing Brian Balmages’ ‘Gettysburg.’ Photo by Matt Debnam

The AMS band, under the direction of Dee Raby. 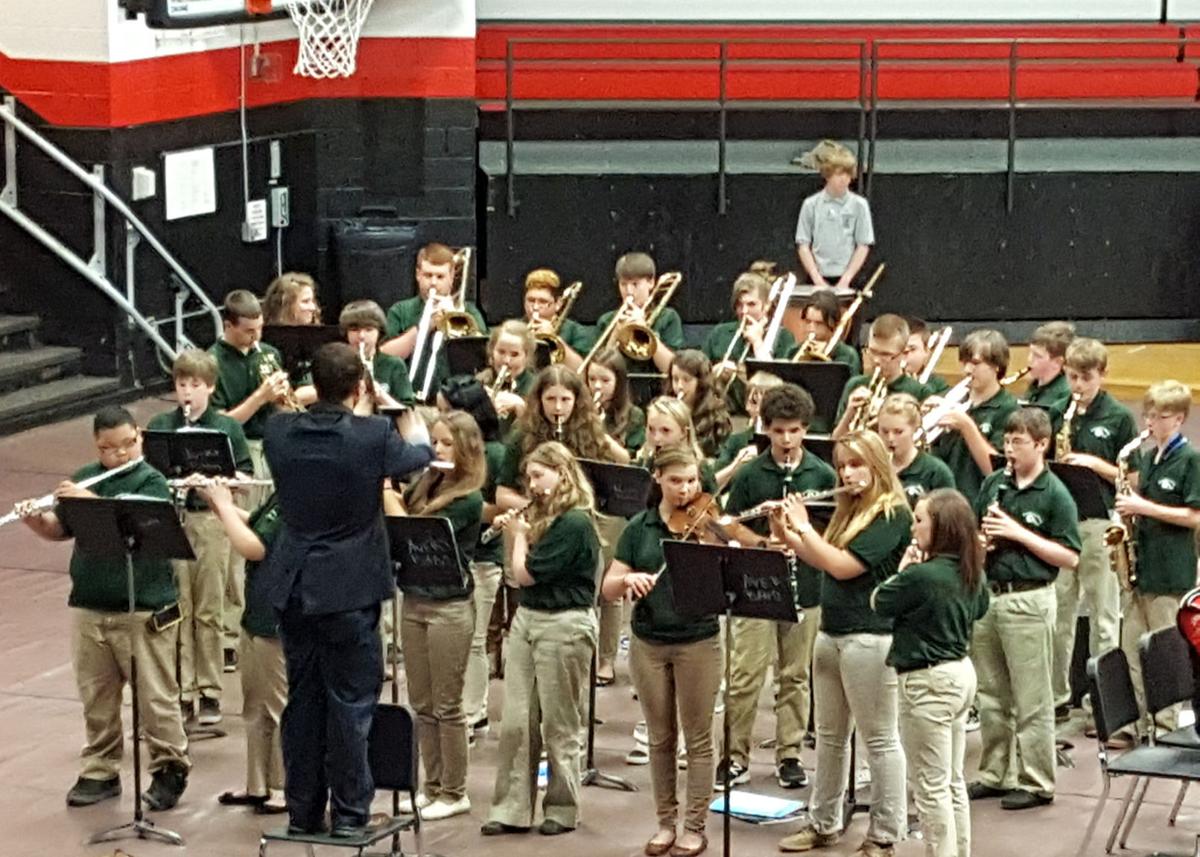 The CMS Band, under the direction of Will Freeman. 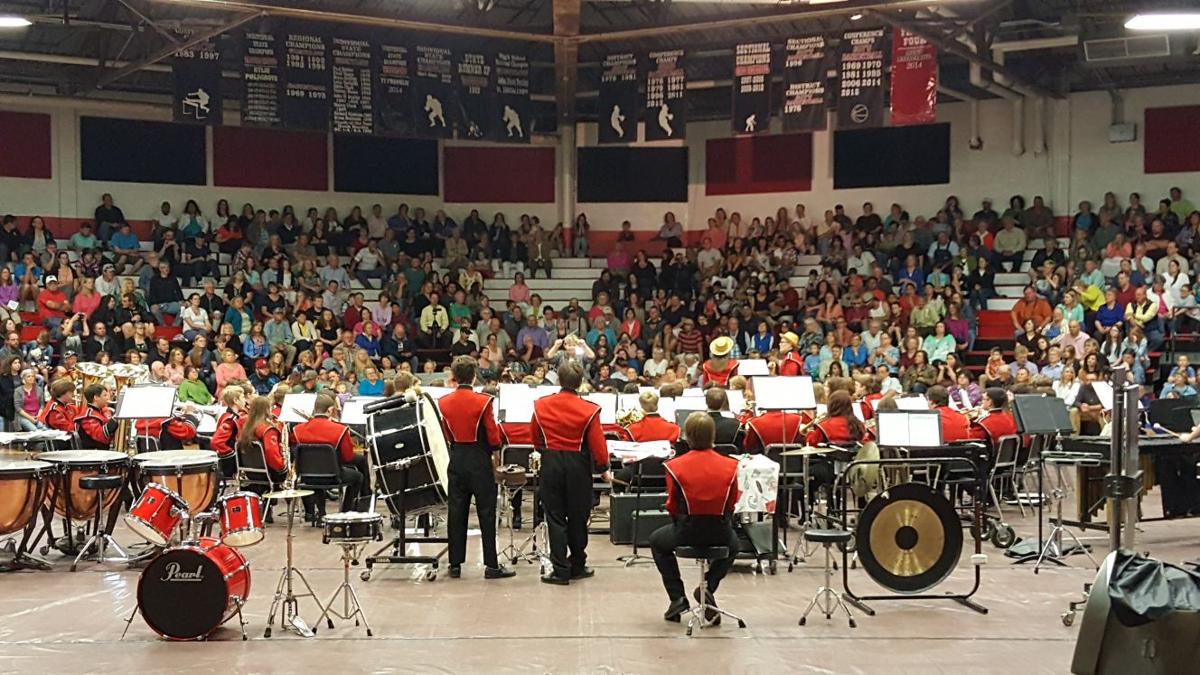 Together nearly 200 strong, the bands of AMS, CMS and ACHS joined together for a grand finale, playing Brian Balmages’ “Gettysburg.”

Together nearly 200 strong, the bands of AMS, CMS and ACHS joined together for a grand finale, playing Brian Balmages’ ‘Gettysburg.’ Photo by Matt Debnam

The AMS band, under the direction of Dee Raby.

The CMS Band, under the direction of Will Freeman.

NEWLAND — The Avery County Band program showed its stuff in a major way on May 22, with student musicians from Cranberry Middle School, Avery County Middle School and Avery County High School performing before a crowd of hundreds of parents and community members at the ACHS gym.

With more than 200 members between the three bands, director Dee Raby said that seeing them all together brought her great hope for the program’s future. The program was broken down into seven portions, with each grade level playing its own pieces. While Raby directed the AMS band, Will Freeman led CMS, with the two switching off throughout the program.

Cranberry Middle School sixth graders began with a rendition of Mark Williams’ “Cardiff Castle,” followed by an AMS sixth-grade performance of Rob Grice’s “Dance of the Jabberwocky” and the Beach Boys classic “Barbara Ann.” Both Raby and Freeman praised the young musicians, many of whom have only been playing their instruments for a few months prior to the concert.

The middle school portion of the program was capped off by CMS eighth graders, who played Ralph Hermann’s “Selection from an Arlington Overture” and Robert W. Smith’s “Danza Del Fuego.”

After a brief intermission, during which audience members were encouraged to vote for their favorite performance of the evening, the ACHS Concert Band took to the floor. Playing some technically difficult music, the award-winning band didn’t miss a beat, powering through tough pieces with great gusto.

From Gustav Holst’s “Chaconne from First Suite in Eb” to a grand finale of John Phillip Sousa’s classic “Stars and Stripes Forever” march, the band played each piece with precision and intensity, earning enormous applause from the crowd.

For the grand finale, all three bands joined together to play Brian Balmages “Gettysburg,” a piece written to reflect the chaos and mood of the 1863 battle between the Union and the Confederacy. While Raby conducted AMS and Freeman conducted CMS, ACHS drum major Jacob Daniels led his band.

When the smoke of “Gettysburg” cleared, Raby offered thanks to faculty, parents and students who had a hand in the concert. She also extended thanks to the Avery County Board of Education, Dr. David Burleson and the Band Booster parents for their hard work throughout the years. The Avery Middle sixth grade was announced as winners of the “Battle of the Bands” competition.

Pelosi: Trump's been a failure in every way from the start

Better Cities Project, think tanks propose plan for getting Americans back to work