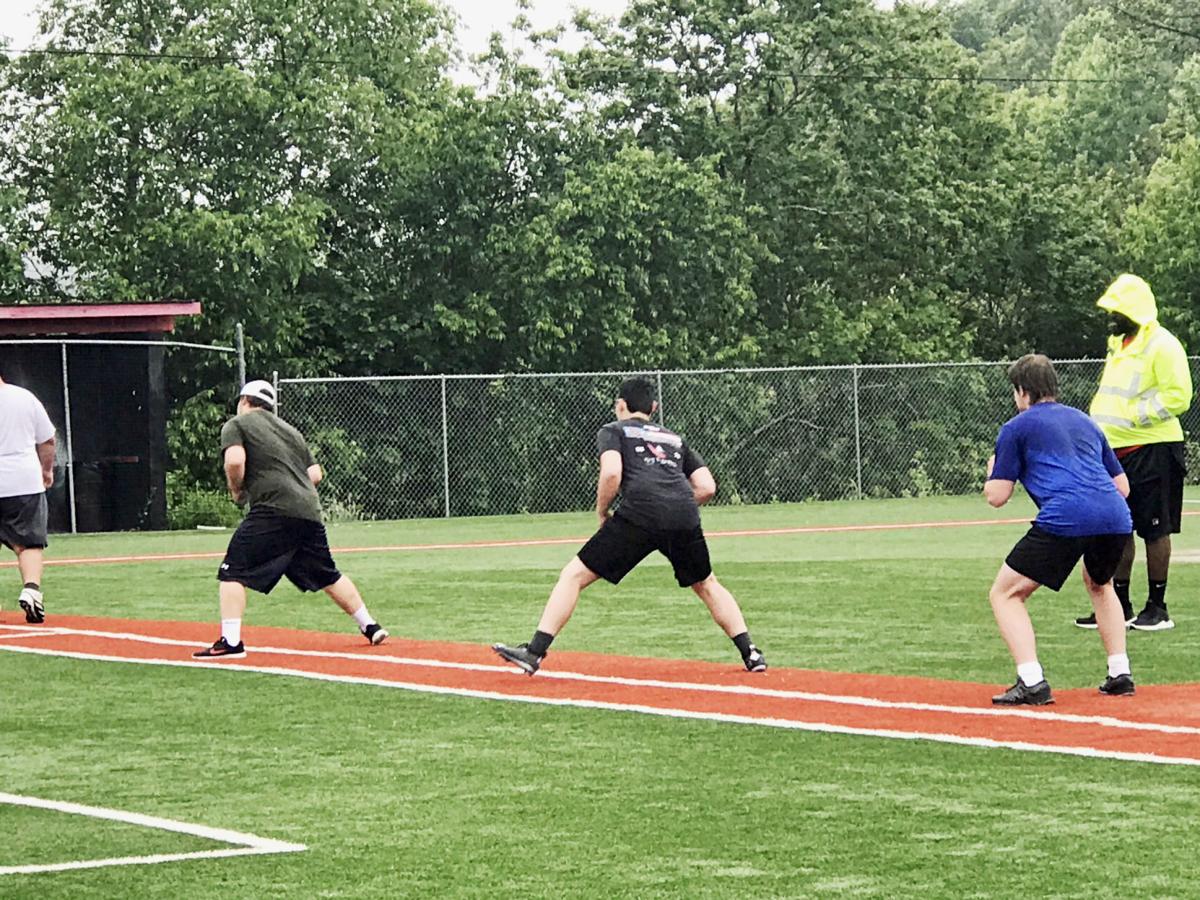 Avery football players are put through the paces in conditioning and footwork drills at the Vikings baseball facility on a rainy Monday, June 15, in Newland. 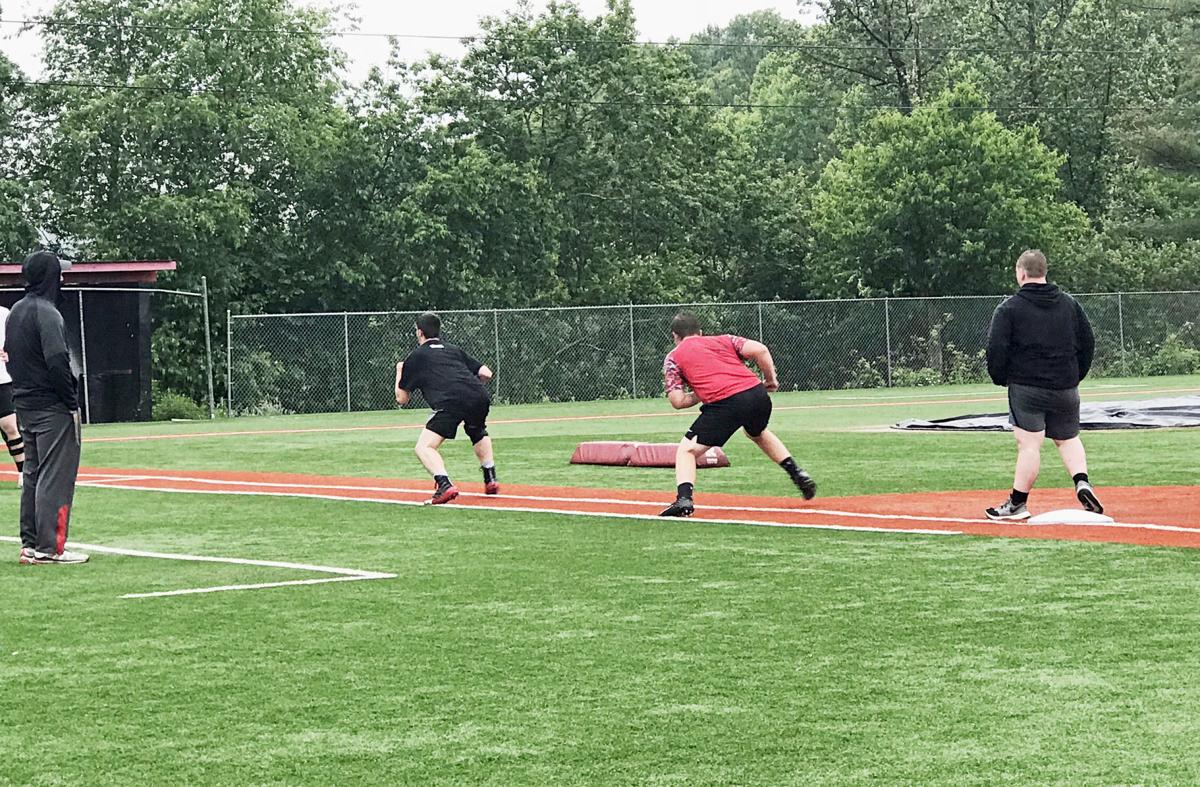 Avery Head Football Coach Mac Bryan (left, with hooded jacket) administers a drill with linemen while adhering to social distancing principles on the first day following the lifting of the state's dead period for high school athletics on Monday, June 15. 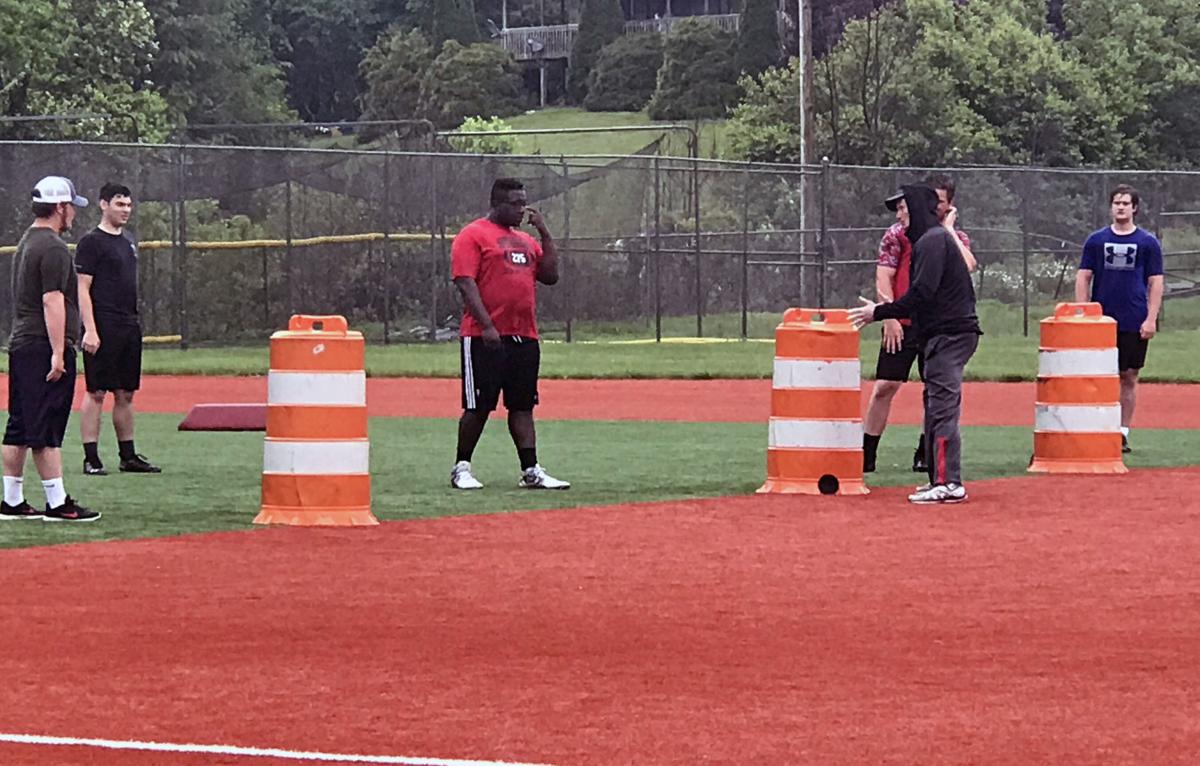 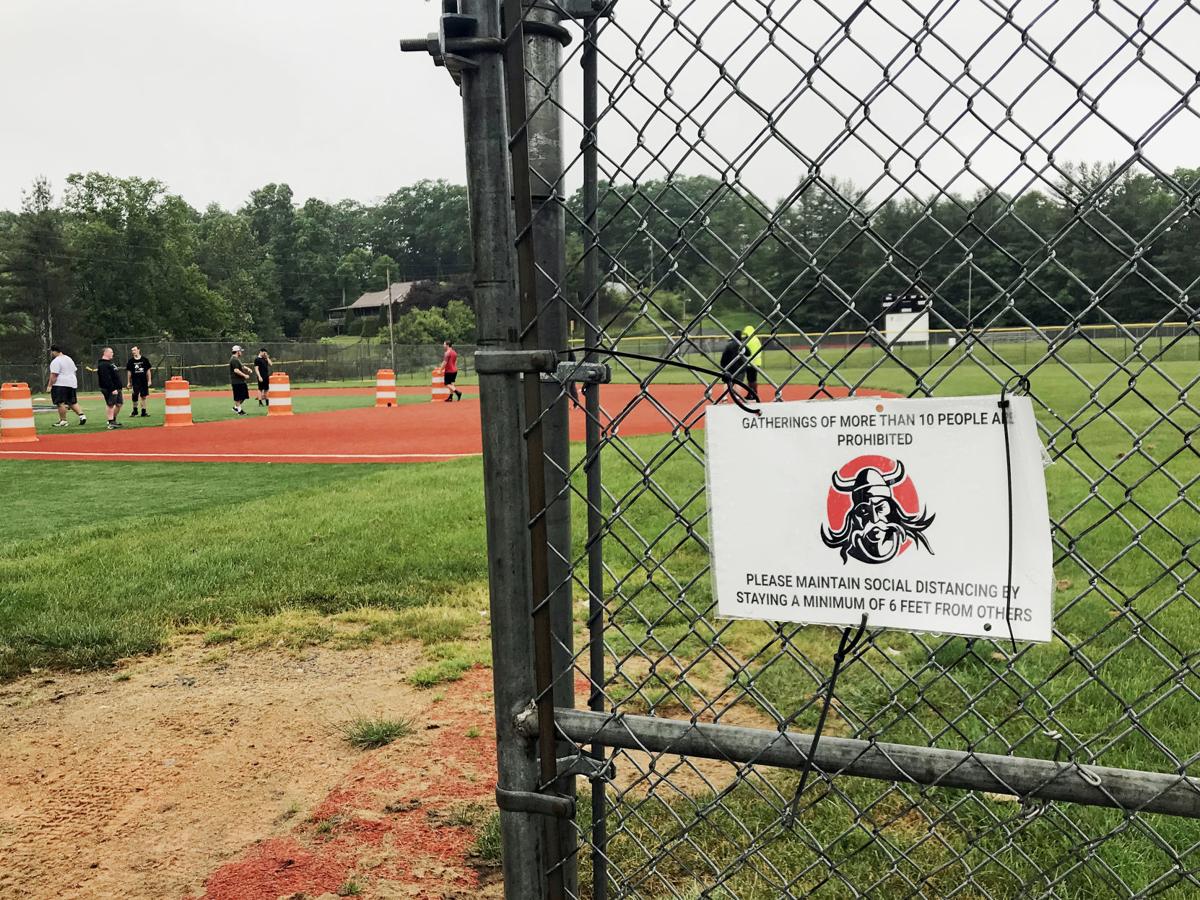 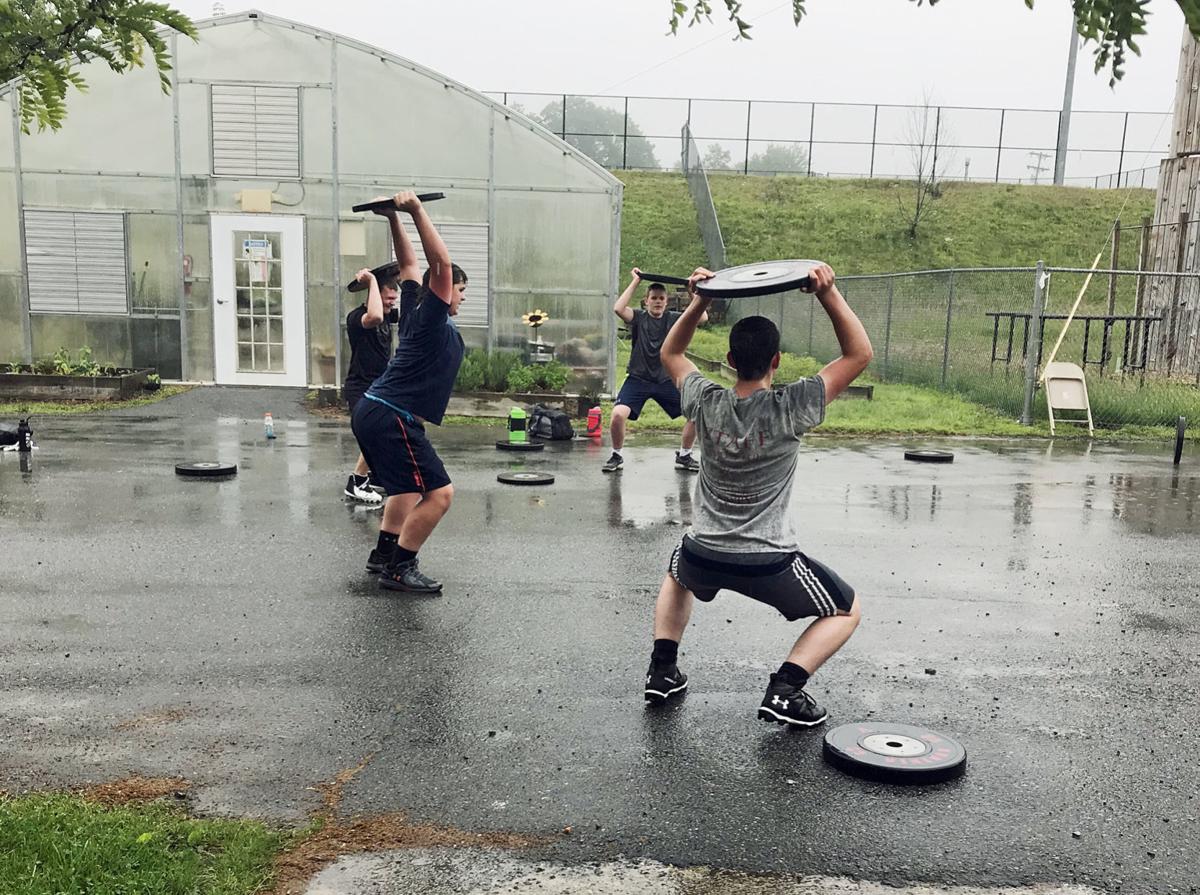 Avery student-athletes lift individual weight plates in place of working out indoors, which is prohibited by NCHSAA guidelines under phase one of its return to athletics following a 94-day dead period. 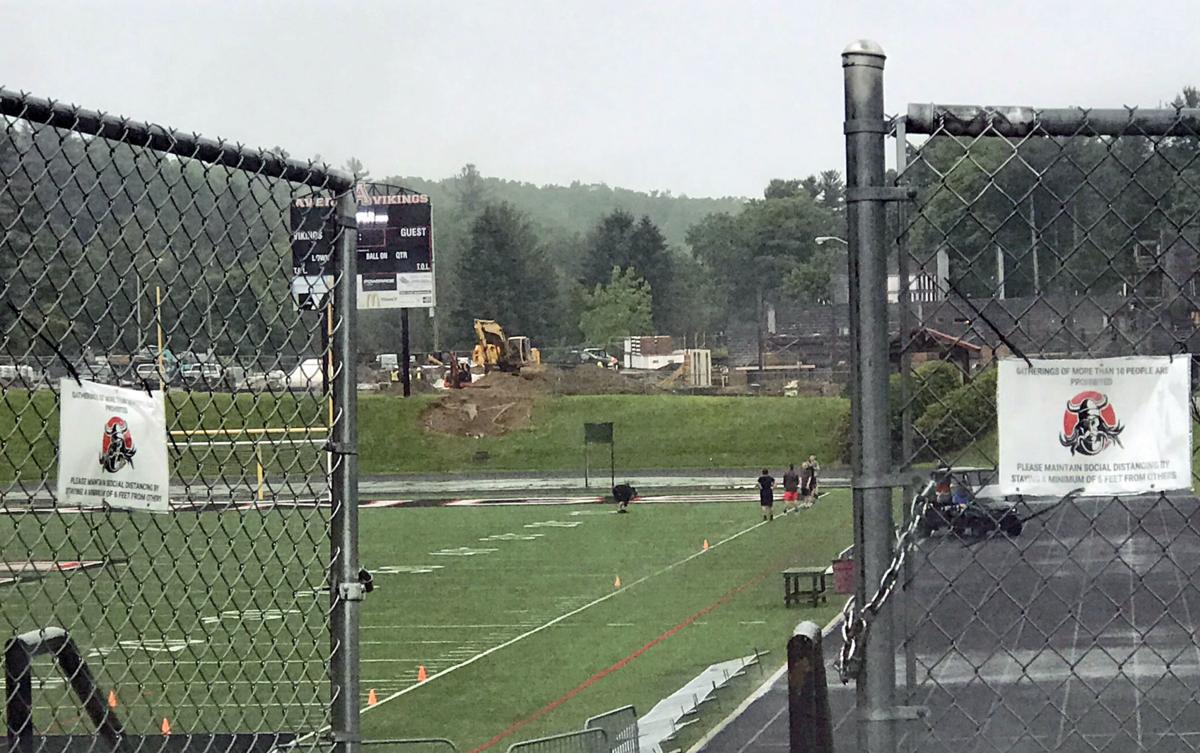 Players and coaches undergo conditioning drills on the far end of MacDonald Stadium on Monday, June 15, the first day high school sports athletes can condition and work out in restricted and organized fashion under NCHSAA rules.

Avery football players are put through the paces in conditioning and footwork drills at the Vikings baseball facility on a rainy Monday, June 15, in Newland.

Avery Head Football Coach Mac Bryan (left, with hooded jacket) administers a drill with linemen while adhering to social distancing principles on the first day following the lifting of the state's dead period for high school athletics on Monday, June 15.

Avery student-athletes lift individual weight plates in place of working out indoors, which is prohibited by NCHSAA guidelines under phase one of its return to athletics following a 94-day dead period.

Players and coaches undergo conditioning drills on the far end of MacDonald Stadium on Monday, June 15, the first day high school sports athletes can condition and work out in restricted and organized fashion under NCHSAA rules.

For Viking fall athletics, the first day returning to team-related activities on campus meant looking to hold productive sessions while still adhering to the buzzword policies that have become commonplace since the NCHSAA suspended sports activities at all high schools three months ago in response to the coronavirus pandemic, practices that include social distancing, temperature checks, groups of less than 10 people, frequent sanitization and individual use of related equipment.

Guidelines given to Avery High School and every NCHSAA member school fall in line with instructions previously released by the N.C. Department of Health and Human Services and the National Federation of State High School Associations. A number of area high schools have welcomed and capitalized on the opportunity to offer some semblance of athletic training at the first available day, as a number of activities were missed when spring workout sessions were disallowed. Other schools have opted to delay beginning their fall sports preparations until later in the month of June or after the July 4 holiday.

First-day workouts at ACHS for the gridiron group involved outdoor-only work in the steady rain, with one small-numbered group working on footwork and conditioning drills on the Avery baseball field, another group of similar numbers spending time on the turf at MacDonald Stadium, while yet another group worked on conditioning and weight training outside of the team’s weight room, using individual weight plates to implement squats and lifts for muscle development.

In all, the Vikings had approximately 25 to 30 student-athletes chomping at the bit, ready to return to some semblance of normalcy amid the significant changes that have occurred since mid-March, even working through the occasional morning downpour with high spirits.

“I told the kids it was a good omen that we had football playoff weather for the first day of practice,” Avery Head Football Coach Mac Bryan said. “It was pretty chilly. I think we were able to get everything done that we needed done. We’re following all the protocols from the state high school association to the letter, doing everything as they have told us to. It’s hard to practice football without a football, but at the same time I think the main thing is conditioning right now, trying to get the players’ legs going again and doing what we can with a plate workout since we can’t go into the weight room. We’re trying to do some different things, again trying to get the muscles back right, which is really important right now. From a football perspective, what we can basically do is go over concepts and basic individual skills in a short amount of time, as there is a 90-minute time limit on the workouts themselves, and the main bulk of that must be the conditioning format.”

Coaches and training staff were on hand for all athletic gatherings, whether on the athletic fields or, in the cases of sports such as tennis, basketball and volleyball, on the court. To assist with distancing, some of the indoor sports teams split into small groups for drills with intentional spacing, while programs also utilized other gyms in the county to ensure that health guidelines and safety maintained top priority.

Despite the limitations, coaches continue to make preparations to help their athletes gear up for their respective sports, and are excited about the opportunity to work with their players in athletic endeavors.

“I’m so excited to see my girls again. If this has taught me anything, it’s not to take a single practice for granted,” Avery Lady Vikings Head Basketball Coach Allison Phillips said of beginning her team’s summer workouts. “We will be using this time to work on individual skills such as ball handling and shooting. These are two key areas where we struggled this year, so it’s a great time for us to focus on them. I am so excited to start working with the incoming freshman and to introduce them to our program!”

“It was great having the kids back. We had a decent turnout for the first day. The kids were excited and missed it, just like the coaches have,” Bryan added. “I think football becomes very important, and I’m sure they’re tired of not being together and not being able to work out together, just like us coaches are. After today’s workout, I’m sure they’ll be sore tomorrow, I can tell you that.”

Bryan noted that the department has worked diligently to ensure that every student and adult participating are strictly following and/or enforcing the state health guidelines to prevent the spread of COVID-19. From requiring players to provide their own water to required temperature monitoring, having hand-sanitizing stations onsite and thoroughly disinfecting weight plates and any additional equipment used in conditioning work, the football program is leading the way as the first fall sport to commence under the “new normal” as it currently in constructed.

“We’re limited to 25 people to a venue, so we’re using three separate venues so we won’t get anywhere close to 25 together at one location,” Bryan added. “There has been a lot of preparation going into this, with several different plans made up until we received guidelines on what we could do. The state guidelines made the logistics of things a little simpler in staying outside. We put this plan together as a staff last week to dry run the plan, we made sure Joe (ACHS athletic trainer Hawkins) was involved in that, as we wanted our trained professionals involved. Following the protocol isn’t hard, but it’s going to be hard to get a lot of football done. The emphasis must be on conditioning because, until they release new guidelines, it’s very hard to do a lot of football stuff.”

On the roundball court, the basketball teams are also having to adapt to ensure health guidelines are followed.

“We had a good turnout for our first day and the kids worked hard,” Cody Frady, Avery boys basketball head coach, said. “We went with very small groups to make sure that we could correctly follow all health requirements.”

Looking ahead, Bryan is optimistic that positive progress will continue when it comes to eventual practices later this summer, including the potential for scrimmages and the commencement of regular-season play in mid-August. In doing so, he also hopes that more players in football and other high school sports will have the opportunity to participate with the assurance that safety is of top concern.

“I think we’ll have more as everything gets going again and kids know what’s going on. We’ve tried to spread the word as best we can. I thought the numbers were good, but we always want more. We’re hoping that the number of kids coming will increase, but I thought we had a good day today. The kids who were here worked hard, and we were in better shape than I thought we’d be in.”

In the case of Avery Football, workout days begin as players are meeting at 8 a.m. with health screenings, followed by conditioning and workouts from 8:30 to 10 a.m. A state-mandated dead period will be implemented from June 29 through July 5.

“We need every kid there that wants to play,” Bryan added. “We can ensure parents and guardians that we’re taking every safety protocol that is required and we will not bend those protocols. We’ll do exactly what we’re asked to do.”