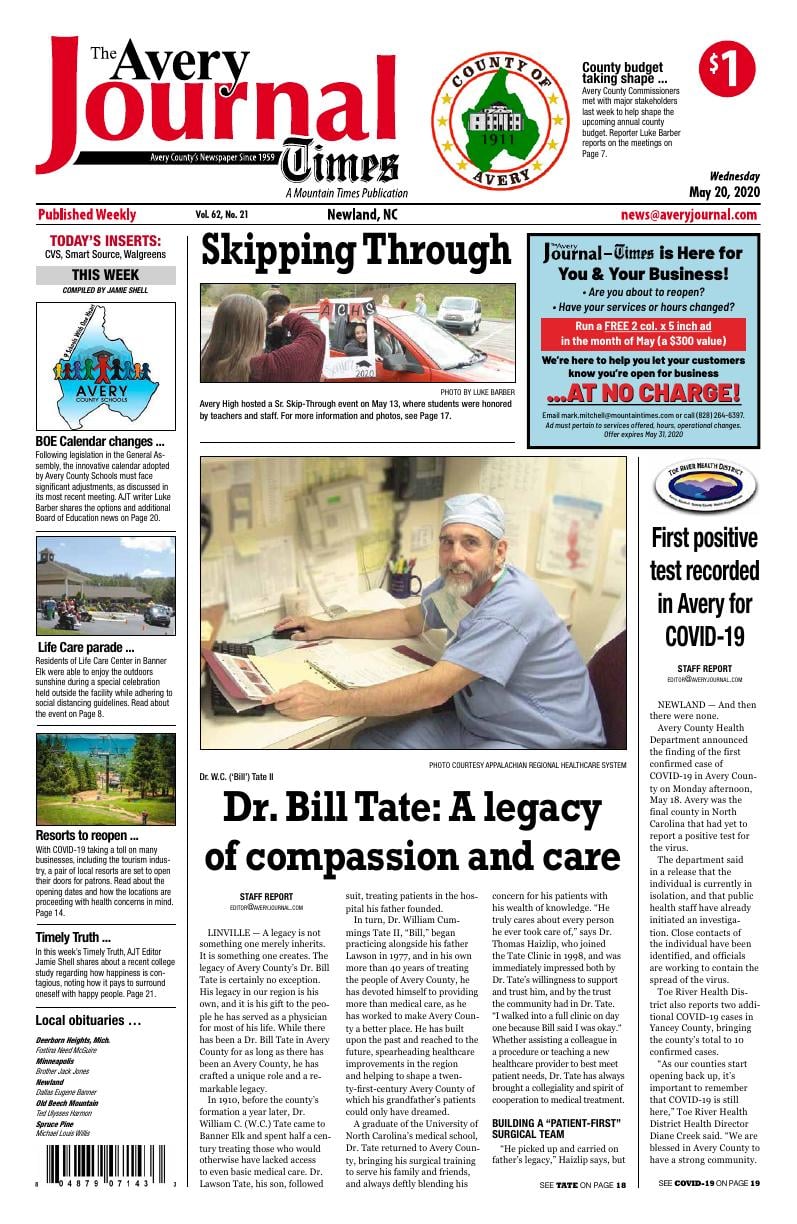 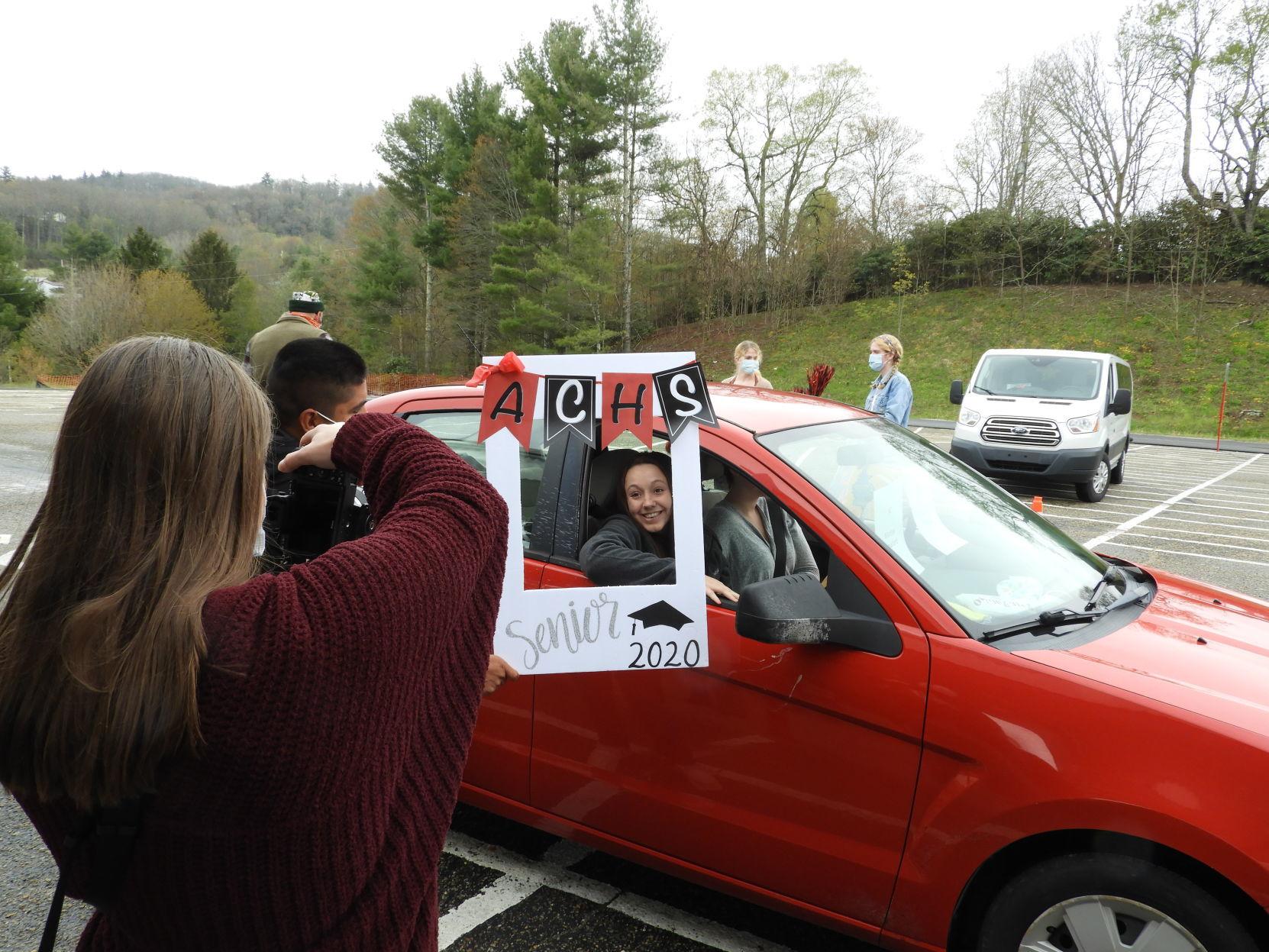 Avery High hosted a Sr. Skip-Through event on May 13, where students were honored by teachers and staff. For more information and photos, see Page 17.

LINVILLE — A legacy is not something one merely inherits. It is something one creates. The legacy of Avery County’s Dr. Bill Tate is certainly no exception. His legacy in our region is his own, and it is his gift to the people he has served as a physician for most of his life. While there has been a Dr. Bill Tate in Avery County for as long as there has been an Avery County, he has crafted a unique role and a remarkable legacy.

In 1910, before the county’s formation a year later, Dr. William C. (W.C.) Tate came to Banner Elk and spent half a century treating those who would otherwise have lacked access to even basic medical care. Dr. Lawson Tate, his son, followed suit, treating patients in the hospital his father founded.

In turn, Dr. William Cummings Tate II, “Bill,” began practicing alongside his father Lawson in 1977, and in his own more than 40 years of treating the people of Avery County, he has devoted himself to providing more than medical care, as he has worked to make Avery County a better place. He has built upon the past and reached to the future, spearheading healthcare improvements in the region and helping to shape a twenty-first-century Avery County of which his grandfather’s patients could only have dreamed.

A graduate of the University of North Carolina’s medical school, Dr. Tate returned to Avery County, bringing his surgical training to serve his family and friends, and always deftly blending his concern for his patients with his wealth of knowledge. “He truly cares about every person he ever took care of,” says Dr. Thomas Haizlip, who joined the Tate Clinic in 1998, and was immediately impressed both by Dr. Tate’s willingness to support and trust him, and by the trust the community had in Dr. Tate. “I walked into a full clinic on day one because Bill said I was okay.“ Whether assisting a colleague in a procedure or teaching a new healthcare provider to best meet patient needs, Dr. Tate has always brought a collegiality and spirit of cooperation to medical treatment.

“He picked up and carried on father’s legacy,” Haizlip says, but he “never endorsed hierarchy,” despite his pedigree and academic degrees. “Every member of his team felt important and prized, valued as friends and colleagues, not hired help,” Sheri Cornett, a surgical technologist who spent decades working beside Dr. Tate in the operating room, agrees, “He never thought he was above anyone else and never treated anyone like second best because the patient always had first priority.”

That “patient-first” mentality explains much about Bill Tate’s choices, including his pivotal decision to spend his entire medical career practicing in Avery County.

Dr. Bob Clark notes Dr. Tate’s remarkable investment in his patients, who have always been the core of his practice. “He bypassed a lot of reward as a rural surgeon caring for rural people. He has always treated people like a part of his family,” Clark said.

For many physicians, Avery County might lack the appeal of a big city. Dr. Charlie Baker recalls originally meeting Bill Tate when they were both students at the first Governor’s School at Salem College in 1963. He thought his new acquaintance was “a guy from the end of the world,” an amusing impression indeed when Dr. Baker himself later came to Avery County to practice.

He notes how a deep connection to the community has allowed Dr. Tate to benefit Avery County, from providing life-saving care to anyone who needed it, to his leadership in merging the historic hospitals of Banner Elk and Crossnore into today’s Cannon Memorial in Linville. “He has always been devoted to quality of care, to improving lives in the community,” Baker noted.

Dr. Clark agrees, noting that that Dr. Tate was frequently on call every other night and, throughout his career, took a wide range of emergency cases that couldn’t wait for a trip to a larger facility. “He’s given his life to mountain folk, people he knew wouldn’t be cared for otherwise,” Clark says, crediting Dr. Tate’s combination of extensive knowledge and love for people with allowing the people of Avery County “to live healthier, longer lives with a better quality of life.” As his colleagues, friends, and patients all recognize, when one is treating neighbors, family, and friends, there is a different dedication than to a stranger.

Dr. Tate “put the community ahead of everything,” says Dr. Haizlip, who notes that his longtime colleague and friend, in his dedication to “appropriate and modern care,” has always been driven to provide whatever his patients needed. “He was willing to take on difficult things, do the homework, do whatever someone needed to make sure people got the right care.” When new skills or tools were necessary, he learned them, and if he really couldn’t do a procedure, he went with the patient to see it done and learn. At the same time, he has always understood that there is more to healing than can be achieved with a surgical procedure.

Perhaps even more remarkable than his vast skill and his lifelong commitment is his love for the people he treats. Carmen Lacey, President of Cannon Memorial Hospital, describes Dr. Tate as “the kindest, most compassionate surgeon I have ever known. He would do whatever it takes to make his patients comfortable.” He has consistently provided whatever care was required, as Dr. Baker notes. With Dr. Tate, “If you needed a doctor, you had a doctor... It wasn’t his job. It was a lifestyle.”

Dr. Tate has always recognized that community, faith, and family are vital to health and recovery. That focus is clear in his own life outside the operating theater. Whether playing with his grandchildren, laughing with his wife Donna, singing in the church choir, spending 20 years championing education as part of the Avery County school board, supporting the YMCA, or just hugging someone in the grocery store, Dr. Tate’s devotion to his family, his faith, and his community shine through in all he does.

“He absolutely loves this community,” Lacey said. The community loves Dr. Tate in return. In 2013, he was inducted into the Martha Guy Hall of Legends, acknowledging his contributions to Avery County. Even after his retirement, many of his former patients still consider Dr. Tate to be “their” doctor. The improvements he has brought to their lives, and to the lives of everyone in Avery County, are his legacy, his own legacy, and the journeys of his family, his friends, and his patients are all the better for knowing him.

Drive-through retirement celebration on May 31

In order to allow the community he has loved so completely to show support for Dr. Tate, friends, former patients, and well-wishers are invited to take part in a drive-through retirement celebration and parade of appreciation at Cannon Memorial Hospital from 1:30 to 2:30 p.m. on May 31.

Angela Tuck, Dr. Tate’s daughter, invites those who would like to convey their support and gratitude to send a card or note to her at PO Box 412, Banner Elk, NC 28604 or by email at angieraye@gmail.com. 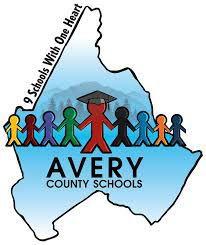 NEWLAND — And then there were none.

Avery County Health Department announced the finding of the first confirmed case of COVID-19 in Avery County on Monday afternoon, May 18. Avery was the final county in North Carolina that had yet to report a positive test for the virus.

The department said in a release that the individual is currently in isolation, and that public health staff have already initiated an investigation. Close contacts of the individual have been identified, and officials are working to contain the spread of the virus.

“As our counties start opening back up, it’s important to remember that COVID-19 is still here,” Toe River Health District Health Director Diane Creek said. “We are blessed in Avery County to have a strong community. Your public officials and county leadership have been working tirelessly to prepare for the impact of this virus. Community members can do their part by continuing to follow the guidelines, and remember that we’re all in this together, and to support one another.”

Avery County Sheriff Kevin Frye confirmed that the case is affiliated with the Sheriff’s Office. Frye added that the individual was asymptomatic and had taken a test for COVID-19 in conjunction with other standard health precautions.

Like other county departments, the Sheriff’s Office has been following state health and safety guidelines, such as checking employee temperatures when they arrive to work.

“We’re taking every precaution that is available to make sure we curtail the spread here,” Frye said.

North Carolina health officials report there have been a total of 19,023 lab-confirmed cases of the coronavirus in the state as of 11 a.m. on Tuesday, May 19, according to statistics posted from NCDHHS. The state also reports 661 virus-related deaths.

The Raleigh News & Observer newspaper reported that 693 individuals have died from the virus, with 19,239 cases statewide as of 11 a.m. on Tuesday, May 19.

A total of 265,008 tests had been completed by the N.C. State Laboratory of Public Health and reporting hospitals and commercial labs as of May 19, according to N.C. DHHS. The estimate of people who have recovered from the virus is 11,637, with the estimate provided each Monday by NCDHHS. NCDHHS estimates a median time to recovery of 14 days from the date of specimen collection for non-fatal COVID-19 cases who were not hospitalized, or if hospitalization status is unknown. The estimated median recovery time is 28 days from the date of specimen collection for hospitalized non-fatal COVID-19 cases.

According to Toe River Health District, which includes Avery County Health Department, 437 people in Avery County have been tested, with 487 negative results and 55 tests pending, as of 11 a.m. on Tuesday, May 19.

A total of 227 people have been tested in Mitchell County as of Tuesday, May 19, with 208 negative results, with 13 results pending. The county has reported six total positive tests for COVID-19, according to TRHD, with five cases having recovered. Yancey County, the latest county to report its first case of COVID-19, reports 525 people tested, with 323 negative results, 192 results pending and 10 current active positive cases of COVID-19.

Statewide, Mecklenburg County has reported the most cases with 2,704. Wake County is reporting 1,264 and Durham County reports 1,046 cases. 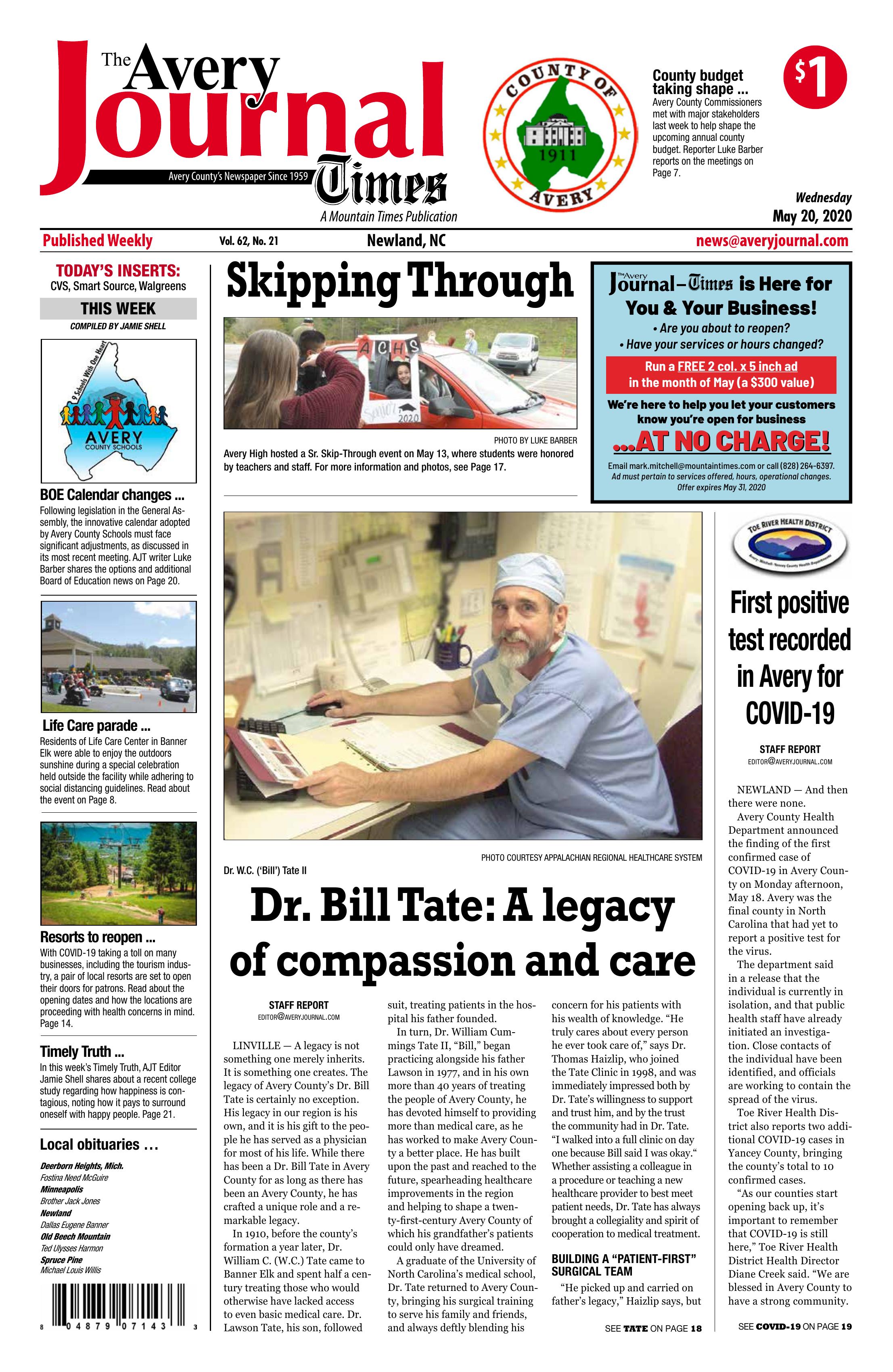