Curbside voting is an option available to those who are unable to venture from their vehicle into the voting center at the Avery County Board of Elections office.

AVERY COUNTY — One-stop absentee voting will be held in the Board of Elections office located in the Avery County Courthouse Annex, on 200 Montezuma Street, Suite 307 in Newland beginning Thursday, Oct. 14, and continuing through Saturday, Oct. 30.

For additional information contact the Avery County Board of Elections at (828) 733-8282, or click to https://vt.ncsbe.gov/RegLkup/ to use the NCSBE voter search tool to determine if you reside in an area with a municipal election. 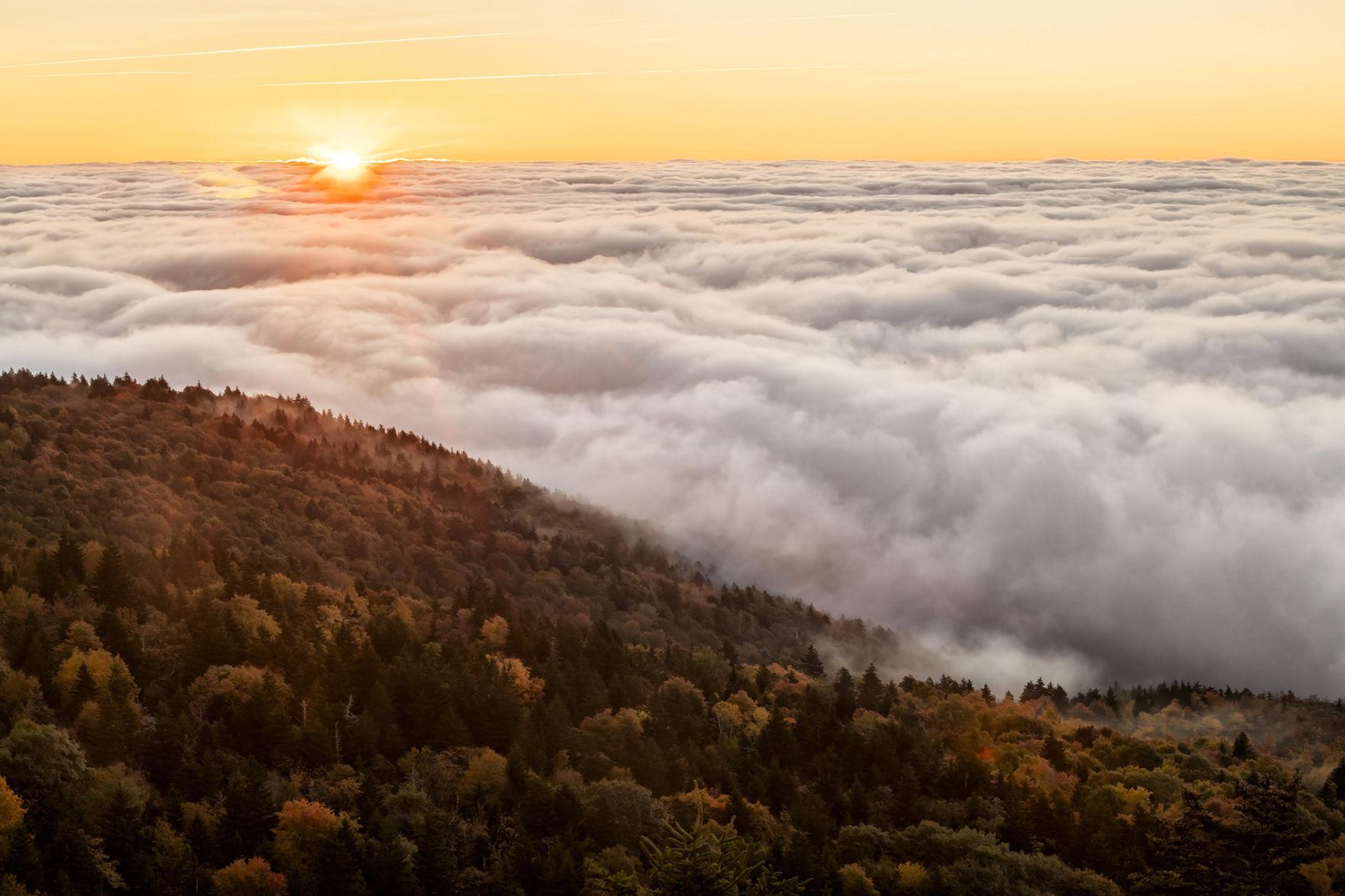 Hues of orange, red and yellow descend Grandfather Mountain’s slopes, past the nonprofit nature park’s upper switchbacks and into a sea of clouds below during sunrise on Monday morning, Oct. 11. With clear weather in the extended forecast and the recent bout of warm weather having delayed color progression, visitors to Avery County and across the Western NC High Country can expect a banner week for fall color viewing as numerous outdoor activities abound this weekend. See inside this week’s edition for additional scenes of fall foliage from Grandfather Mountain and portions of the area.

The annual Banner Elk Woolly Worm Festival draws thousands of people to Banner Elk for the weekend from all over the region. This image was captured from a ladder truck courtesy of Banner Elk Volunteer Fire and Rescue in 2019.

Celebrating the renowned woolly worm, a caterpillar which becomes the isabella tiger moth, the festival will feature more than 150 vendors and thousands of visitors with their trained worms racing to see who has the fastest worm, as well as a prediction of the winter weather based on the winning worm’s appearance.

The woolly worm races feature multiple heats in which owners place their worms at the bottom of a string and hope theirs is the first to reach the top. At the elevated finish line, the champion worm will have its segments read by Avery County native Tommy Burleson, the 7-foot, 2-inch former North Carolina State University basketball player and 1972 Olympic basketball team member.

Aside from winning the grand prize of $1,000, the winning worm also has the distinction of being named the “worm of record” for the year to predict the winter weather for the High Country. The bands of fur on the worm that vary in shading and color between brown and black determine the weather forecast, with each segment corresponding to one of 13 weeks of winter. The darker the band, the more severe the weather forecast for that week. The champion woolly worm’s markings will be read by Burleson, who will analyze all 13 segments of the woolly worm and announce the prediction.

To race a worm, the cost is $5. Challengers may bring their own woolly worm or buy one at the festival for a small fee.

The fun continues on Sunday, when the winning worm wins a $500 prize. Historically, fewer competitors have entered the Sunday competitions, increasing a racer’s chance of bringing in some extra holiday cash with their fuzzy insect friend.

To relax from the heat of worm-racing competition, visitors will also find a wide variety of craft vendors, meal options and music throughout the festival grounds.

All visitors are asked to wear a face mask for the health and safety of all visitors and volunteers. Pets are not allowed (other than woolly worms, of course).

To learn more about the Woolly Worm Festival, purchase tickets and more, contact the Avery County Chamber of Commerce at (828) 898-5605 or click to www.woollyworm.com.

According to NCSBI search warrant documentation, items consistent with those used to improvise an explosive device discovered at the office of the Grandfather Mountain Highland Games were purchased at the Newland Family Dollar store on Sunday, Sept. 26. Store employees identified Taylor as the purchaser of the items, according to the NCSBI search warrant application executed September 27.

NEWLAND — Equipment purchased locally consistent with manufacturing an improvised explosive device, as well as other specifics in the investigation of the Thomas Dewey Taylor case, have been revealed through court documentation in connection to the application for and execution of a search warrant of Taylor’s home.

As previously reported by The AJT, Taylor, 43, was arrested on Sept. 27 and charged with possession of a weapon of mass destruction and three counts of attempted first-degree murder. He was initially issued a $500,000 secured bond before being raised to $1 million.

According to a copy of search warrant application affidavit and documentation attested by North Carolina State Bureau of Investigation Special Agent W.J. Waugh filed in Avery County court and obtained by The AJT, Taylor was a 27-year employee and most recently office manager with Grandfather Mountain Highland Games. He had been terminated from his position on Aug. 4 for failure to perform job duties.

Additionally, the warrant application provides a detailed listing of probable cause, including the discovery of a manufactured explosive device in a closet located at the Grandfather Mountain Highland Games office in Linville, prompting law enforcement to pursue a warrant to search Taylor’s home.

According to the documentation, GMHG President Stephen Quillin met with Avery County Sheriff’s Office officials on Sept. 24 in reference to an embezzlement case involving Taylor. During the meeting, Quillin showed ACSO detectives and agents with the NCSBI a photograph of a box containing commercial grade pyrotechnics which were located in a closet within the GMHG offices at 4210 Mitchell Avenue in Linville.

The search warrant application states that a meeting was arranged on Sept. 27 between NCSBI Special Agent in Charge G.A. Parsons and GMHG board member Sally Warburton to dispose of the items. Upon arriving at the GMHG office on Sept. 27, Warburton and her husband noticed that power was off in the building.

Inside the cooler were various ignitable liquids and other unknown liquids, and “various items used as shrapnel in incendiary/explosive devices,” according to the search warrant application.

According to the search warrant application, Waugh and US Bureau of Alcohol, Tobacco, Firearms and Explosives Special Agent J. Brown interviewed GMHG administrative assistant Cassie Vance on Sept. 27. Vance admitted to having stored fireworks at the Grandfather Mountain Highland Games office in 2020 and that they had been purchased by Taylor at Cloudland Volunteer Fire Department in Tennessee, adding that Taylor normally bought sparklers and Roman candles.

The search warrant documentation noted that “ATF Special Agent D. Schauble showed Vance a photo of the cooler located in the office closet, and Vance said she thought she had a red in color or blue in color cooler at her residence at 316 Snowshoe Loop which was similar to the image shown to her.”

Search warrant documentation noted that from the investigation it was determined that the phone lines associated with the alarm system at the Grandfather Mountain Highland Games office had been disabled at approximately 12:09 a.m. on Sept. 26, adding that an employee with MHS Technologies stated that prior to the phone lines being disabled, the alarm was disarmed using a code, and that Vance and Taylor knew the alarm code to the building.

The search warrant application relates that NCSBI SA W. Colvard went to the Family Dollar Store in Newland, and located a hot plate matching the one found in the cooler. SA Colvard spoke with the manager at Family Dollar, who stated that a hot plate was sold on Sept. 26, and that a receipt was located which showed “a Bene Casa Black Single-Coil Burner, three (3) 32-ounce bottles of Kingsford lighter fluid and a bottle of Pennzoil 10W30 motor oil were sold at the store on Sunday, Sept. 26, at approximately 6:36 p.m.”

A Bene Casa hot plate, two bottles of Kingsford lighter fluid and one bottle of the same weight and brand motor oil were located in the cooler, with the pyrotechnics. The documentation states that Colvard also spoke with two Family Dollar store employees working at the time of purchase, and one of which positively identified Taylor as the individual who had purchased the items.

Application for a search warrant for 316 Snowshoe Loop, Newland was reviewed and issued at 9:11 p.m. on Sept. 27 by Superior Court District 24 Judge Greg Horne, and was executed at the residence at 9:45 p.m. that evening. According to court documents, SBI agents seized a receipt, cell phone, computer, lock pick kit, PVC pipe and fireworks from the premises.

According to NCSBI, the investigation is ongoing, and Taylor’s next scheduled court date set for Tuesday, Oct. 26.

The warrant documentation can be found at tinyurl.com/34ckv43v.

Click and hold your mouse button on the page to select the area you wish to save or print. You can click and drag the clipping box to move it or click and drag in the bottom right corner to resize it. When you're happy with your selection, click the checkmark icon next to the clipping area to continue.