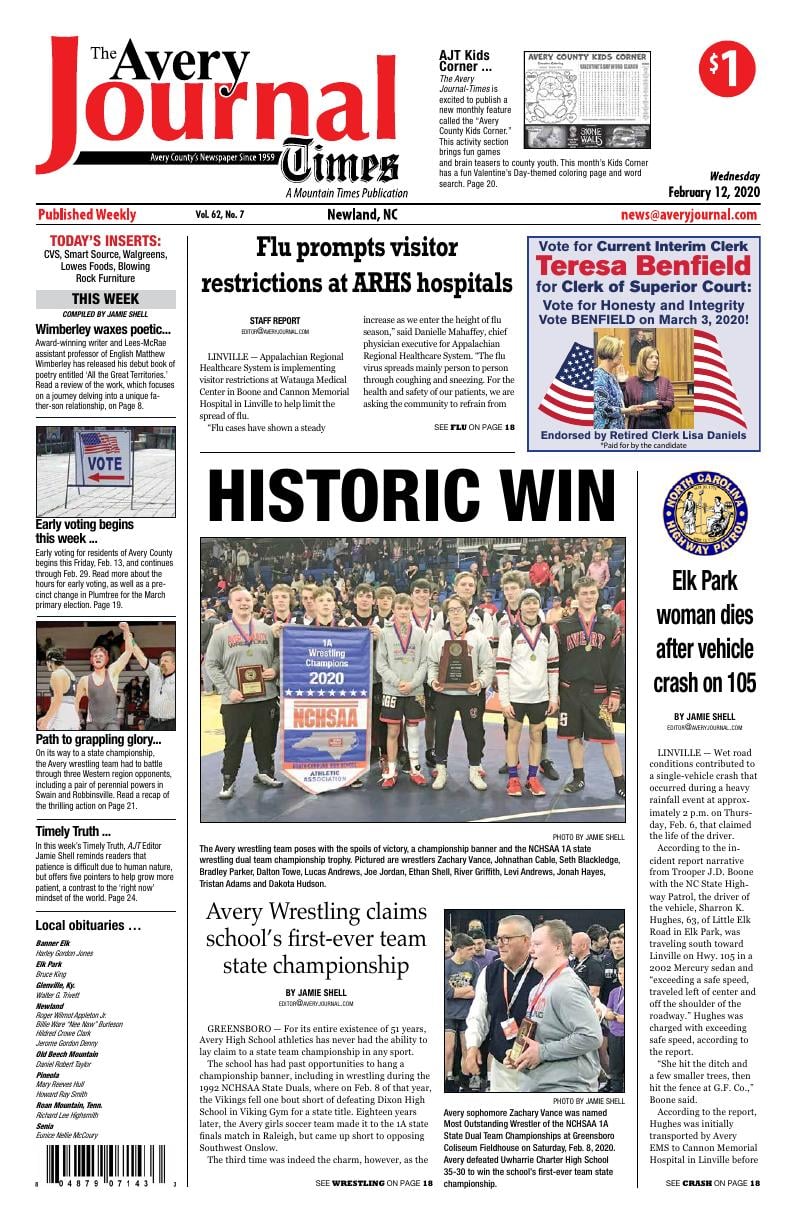 Cannon Memorial Hospital is under visitor restrictions due to the recent uptick in influenza prevalence in the region.

“Flu cases have shown a steady increase as we enter the height of flu season,” said Danielle Mahaffey, chief physician executive for Appalachian Regional Healthcare System. “The flu virus spreads mainly person to person through coughing and sneezing. For the health and safety of our patients, we are asking the community to refrain from visiting to help protect the patients in our facilities.”

According to data from the NC Division of Public Health, a total of 63 North Carolina residents have died during the 2019-2020 flu season, including nine North Carolinians in the week ending on Thursday, Feb. 7.

The total does not reflect all flu-associated deaths in the state, however, as many cases go undiagnosed or unreported.

The medical teams at Watauga Medical Center and Cannon Memorial Hospital may make exceptions on a case-by-case basis for siblings of newborn babies and families of hospice or end-of-life patients.

If you or a family member is experiencing any of the symptoms below, seek emergency medical care.

In babies, bluish or gray skin color, lack of responsiveness or extreme irritation.

Appalachian Regional Healthcare System is working diligently with local health departments to prevent the spread of flu and appreciates any assistance the public can provide.

For more information about the flu, click to www.flu.gov or www.cdc.gov/flu.

GREENSBORO — For its entire existence of 51 years, Avery High School athletics has never had the ability to lay claim to a state team championship in any sport.

The school has had past opportunities to hang a championship banner, including in wrestling during the 1992 NCHSAA State Duals, where on Feb. 8 of that year, the Vikings fell one bout short of defeating Dixon High School in Viking Gym for a state title. Eighteen years later, the Avery girls soccer team made it to the 1A state finals match in Raleigh, but came up short to opposing Southwest Onslow.

The third time was indeed the charm, however, as the 2020 1A Wrestling State Duals Championship was won in dramatic fashion by the Big Red as it upended fellow 1A power Uwharrie Charter School by a 35-30 final score before a predominantly red-wearing and raucous rooting crowd of Vikings supporters inside the Fieldhouse at the Greensboro Coliseum Complex on Saturday, Feb. 8, exactly 28 years to the day following Avery’s previous appearance at the finals of the state duals.

“This community has believed in this program and support has been amazing. These guys have worked so hard and the community embraced them. It has taken everybody to win this championship,” Avery head coach Matthew Dunn said immediately following the Vikings’ clinching of the title. “Everybody from the start of the year has pushed us to do this.”

Avery jumped out to an early lead in the match, scoring the first points as Ethan Shell earned a 19-6 major decision victory over UCS’s Gage Beal at 120 pounds. Teammate Jonah Hayes earned a 6-4 decision win over UCS’s Austin Kennedy at 126 pounds to take a 7-0 lead. The advantage nearly doubled as River Griffith pinned UCS wrestler Byan Lackey in just 28 seconds in the 132-pound class to spot the Big Red a 13-0 lead.

Avery’s Tristan Adams defeated Uwharrie’s Drew Shelton by 13-3 major decision at 138 pounds to give the Vikings a 17-0 advantage before UCS earned its first points of the match, a 9-4 decision victory by Grayson Roberts over Johnathan Cable at 145 pounds to narrow the deficit to 17-3.

UCS earned two more consecutive wins to draw closer. Jerry Jimenez won by 12-6 decision over Avery’s Bradley Parker at 152 pounds to pull within 17-6, then teammate Doug Bowles pinned Avery’s Seth Blackledge at the 160-pound class to draw the match to within five points at 17-12.

Needing to shift momentum, Avery received a boost from Dalton Towe at 170 pounds, who won a hard-fought 4-0 decision over UCS’s Cameron Clark to pull ahead 20-12. Viking teammate Lucas Andrews, who was celebrating his 18th birthday on the mat, gave himself and his teammates the gift of points, as he pinned Uwharrie’s Jamie Bernal in 5:34 to expand the Avery edge to 26-12.

In an exciting bout at 195 pounds, Avery’s Dakota Hudson left it all on the mat in his battle against Uwharrie’s Aiden Carter, but Carter emerged with a pinfall win in the final second of the match to earn six points for his club and slice into Avery’s overall lead.

The NCHSAA partnered with North Carolina Farm Bureau Insurance to recognize one wrestler from each Dual Team Wrestling state finalist with the 2020 Sportsmanship Awards. with Hudson earning the award from the Avery squad.

Knowing that Avery would forfeit matches at the 106- and 113-pound weight classes, respectively, and give the Eagles 12 free points, the winner of the 285-pound bout between Avery’s Zachary Vance and Uwharrie Charter’s Sergio Saldana was the deciding, winner-take-all bout of the match.

In the contest, Vance stepped up in dominating fashion to help push the Vikings across the proverbial finish line, as Vance racked up points in the second period to build a lead and controlled the final period of the match for a 7-0 decision win to clinch the championship and send the partisan Avery faithful into a frenzy.

For his performance under pressure, Vance was named as the 1A Championship Most Outstanding Wrestler.

“It all came down to Zack, and he’s the kind of kid that you can put that kind of pressure on his shoulders and he just humbly walked with it,” Dunn added. “That’s a kid you can trust in the room and on the mat. He’s a great kid and I love him and his teammate love him. It’s like he was unshaken and so cool in that match with all that was at stake. He goes out and beats the No. 2 wrestler in the state by seven points and it’s just an outstanding effort.”

The entire match, including its roller coaster of emotional highs and lows, was the ride the Vikings endured to bring home the top prize. Dunn noted that the little things made all the difference in the Big Red’s performance in earning the championship medals.

“I think one of the differences in the match was that our guys went out there constantly looking to score points. I think the other team was a little more hesitant and looking for more moves, but with our guys, there was never a point where we weren’t out there believing and going after points,” Dunn said. “Some of that was just faith in each other, and some of that was in conditioning, but we were constantly looking to win and score points. We weren’t satisfied with just going out to win by decision, but we were working to get that pin or major decision or tech fall, and that was the effort we showed. We can’t win this match if we just win decisions. They had to go out and sacrifice that extra effort, and that’s what they accomplished.”

Avery Wrestling received a hero’s welcome, showered with a long standing ovation by the Viking faithful during a recognition at halftime of the boys basketball game on Monday, Feb. 10, in Viking Gym. Avery wrestles at Mt. Airy in the 1A West Regional individual tournament this weekend, with top four finishers qualifying for the following weekend’s 1A state championships.

LINVILLE — Wet road conditions contributed to a single-vehicle crash that occurred during a heavy rainfall event at approximately 2 p.m. on Thursday, Feb. 6, that claimed the life of the driver.

According to the incident report narrative from Trooper J.D. Boone with the NC State Highway Patrol, the driver of the vehicle, Sharron K. Hughes, 63, of Little Elk Road in Elk Park, was traveling south toward Linville on Hwy. 105 in a 2002 Mercury sedan and “exceeding a safe speed, traveled left of center and off the shoulder of the roadway.” Hughes was charged with exceeding safe speed, according to the report.

“She hit the ditch and a few smaller trees, then hit the fence at G.F. Co.,” Boone said.

The passenger, William Dewey Turbyfill Jr., 52, of Little Elk Road in Elk Park, suffered minor injuries as a result of the crash. Turbyfill was wearing his seat belt at the time of the incident, according to Boone.

Boone noted the importance of driver safety when traveling on rainy roadways.

“In my experience, it seems that drivers often drive slower in the snow than they do in the rain,” Boone added. “Heavy rain is a cause of many vehicle wrecks.”

The crash was one of multiple incidents in the region that occurred during the inclement weather. A motor vehicle crash claimed two lives on Hwy. 221 Bypass in McDowell County on Thursday evening, Feb. 6, while the previous day, a five-car incident involving a Highway Patrol vehicle occurred in Burke County. 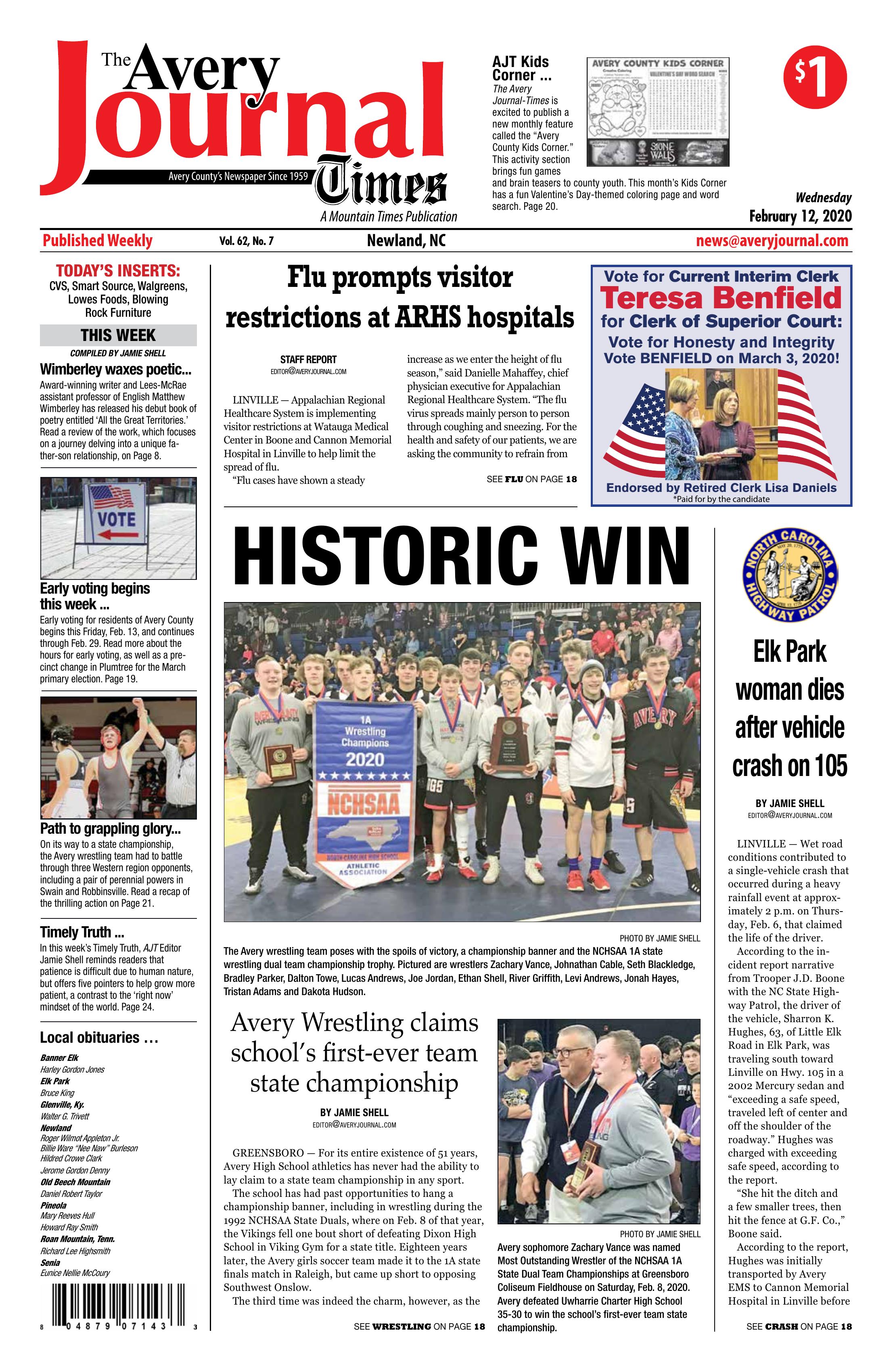