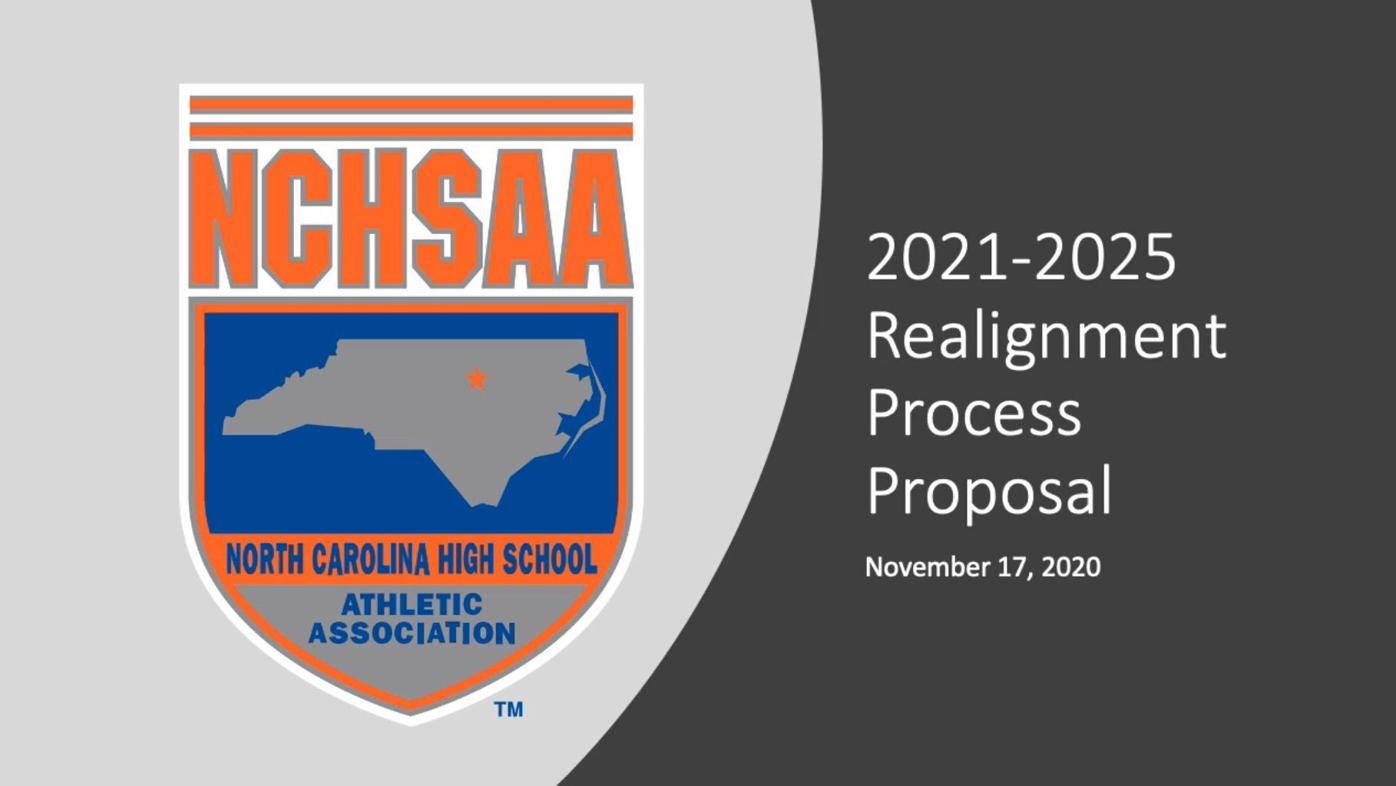 An 11-minute video produced by the NCHSAA steps through the process of the pending realignment process for high school athletics scheduled to take effect in July 2021 through the 2024-2025 school year. 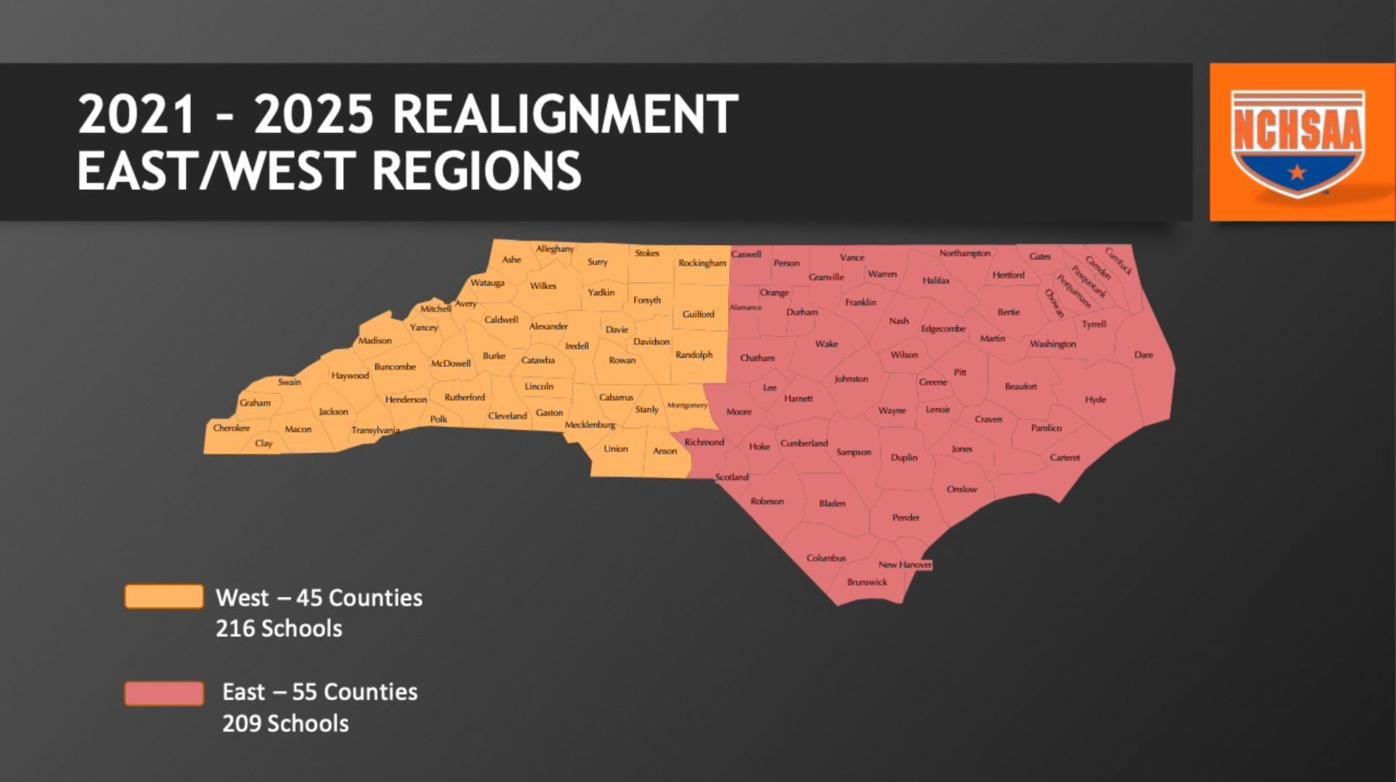 A slide during the NCHSAA’s online realignment explanation illustrates the line of demarcation separating schools in the western and eastern regions.

An 11-minute video produced by the NCHSAA steps through the process of the pending realignment process for high school athletics scheduled to take effect in July 2021 through the 2024-2025 school year.

A slide during the NCHSAA’s online realignment explanation illustrates the line of demarcation separating schools in the western and eastern regions.

Despite the ongoing pandemic, NCHSAA bylaws require that the association realign its schools every four years, and the association posted a video on November 17 laying out its strategy for realigning schools in conferences and classifications to begin with the 2021-2022 school year.

Taking into the account the effect of the pandemic upon school attendance and statistics, with this round of realignment comes a number of changes that will take into account not only the traditional use of enrollment figures, but also sustained performance in athletics, in addition to statistics from a socioeconomic perspective.

Under previous realignment processes, the association utilized only average daily membership (ADM) numbers to assess where and in which class a particular school would participate. In this unique time, however, the association is moving to a multi-factored approach, utilizing not only ADM figures (50 percent of a total referred to as the “Realignment Score”), but also a school’s average performance over its previous three years in the state cup (previously referred to as the Wachovia Cup) for 25 percent of a school’s Realignment Score, in addition to an Identified Student Percentage number, which is determined by taking into consideration the number of students in a particular school who receive government assistance based on USDA standards, and will factor into the final 25 percent of a school’s overall Realignment Score.

When each school’s Realignment Score is determined, the school will be placed in either the East region or the West region, based on a geographic split determined by the NCHSAA. Once that differentiation takes place, the largest 25 percent of the schools in each region will be classified as 4A, with the next largest assigned to 3A, the third-largest quarter of schools into the 2A class, with the remaining 25 percent in each region placed into the 1A classification.

Under the realignment setup currently utilized by the state, the split of schools was 20 percent each in the 1A and 4A classifications, with 30 percent in the 2A and 3A classes.

Once the schools have been scored and assigned their respective regions and classes, the association will then take on the task of creating conferences in those regions, with split conferences, such as the current Western Highlands Conference that Avery competes in, for example, utilized as needed to provide relief for geographical and travel difficulties.

Guidelines and details on the pending realignment, including a video that steps through the association’s process of realignment, can be viewed at the NCHSAA’s website by clicking to www.nchsaa.org/schools/schools-main-page/conferences/realignment-information.

According to the association, the first draft of the next realignment will be disseminated to the member schools on December 10, with schools having until a deadline of Jan. 8, 2021, to submit what they deem as “concerns or adjustments” with the initial draft for consideration.

On January 13 and 14, the realignment committee will take these concerns or adjustments under advisement, followed by a second draft distributed to member schools. Schools will then have a deadline of January 21 to submit an appeal to the committee with concerns over the second rendering.

Virtual regional meetings for schools that appeal following the second draft will take place on January 27 and 28, and the realignment committee will review the latest appeals and create a third realignment draft on February 3 and 4. The deadline for final appeals to the realignment committee following the third draft is February 10, and a final realignment report will be submitted to the NCHSAA Board of Directors on February 17. Sometime in March, the NCHSAA Board of Directors will hear any final appeals focused on procedural errors only, followed by a vote on a final draft.

This cycle’s process of realignment was delayed due to the coronavirus pandemic, which prevented the realignment committee from holding in-person meetings. The new realignment will take effect with the fall 2021 semester and will last through the 2024-2025 school year.