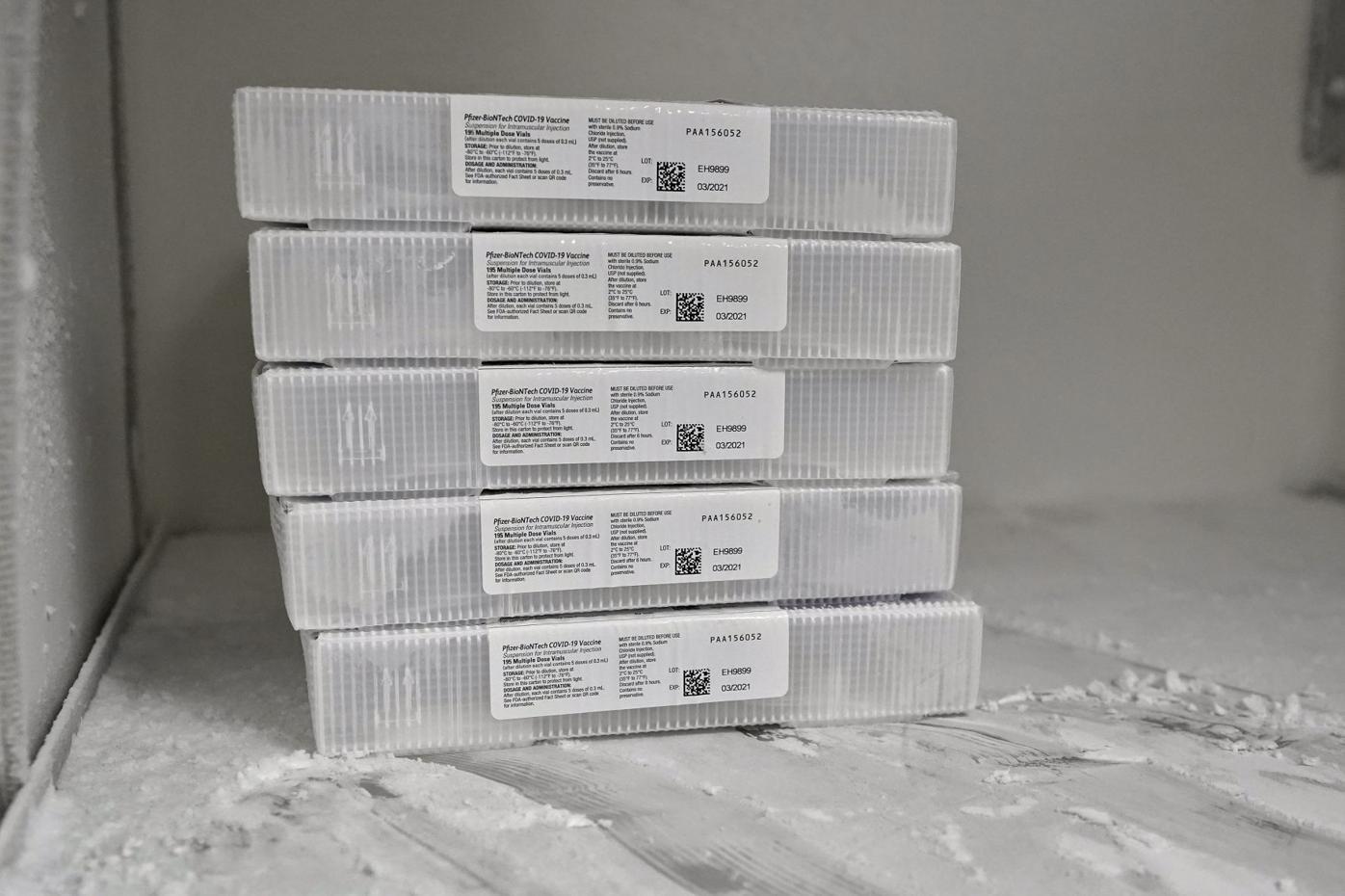 The Pfizer-BioNTech COVID-19 vaccine is seen in a freezer after being delivered Monday, Dec. 14, 2020, at the Tampa General Hospital in Tampa, Fla. The first rollout of vaccines were delivered nationwide earlier this week after the Food and Drug Administration approved Emergency Use Authorization for the COVID-19 vaccine domestically. 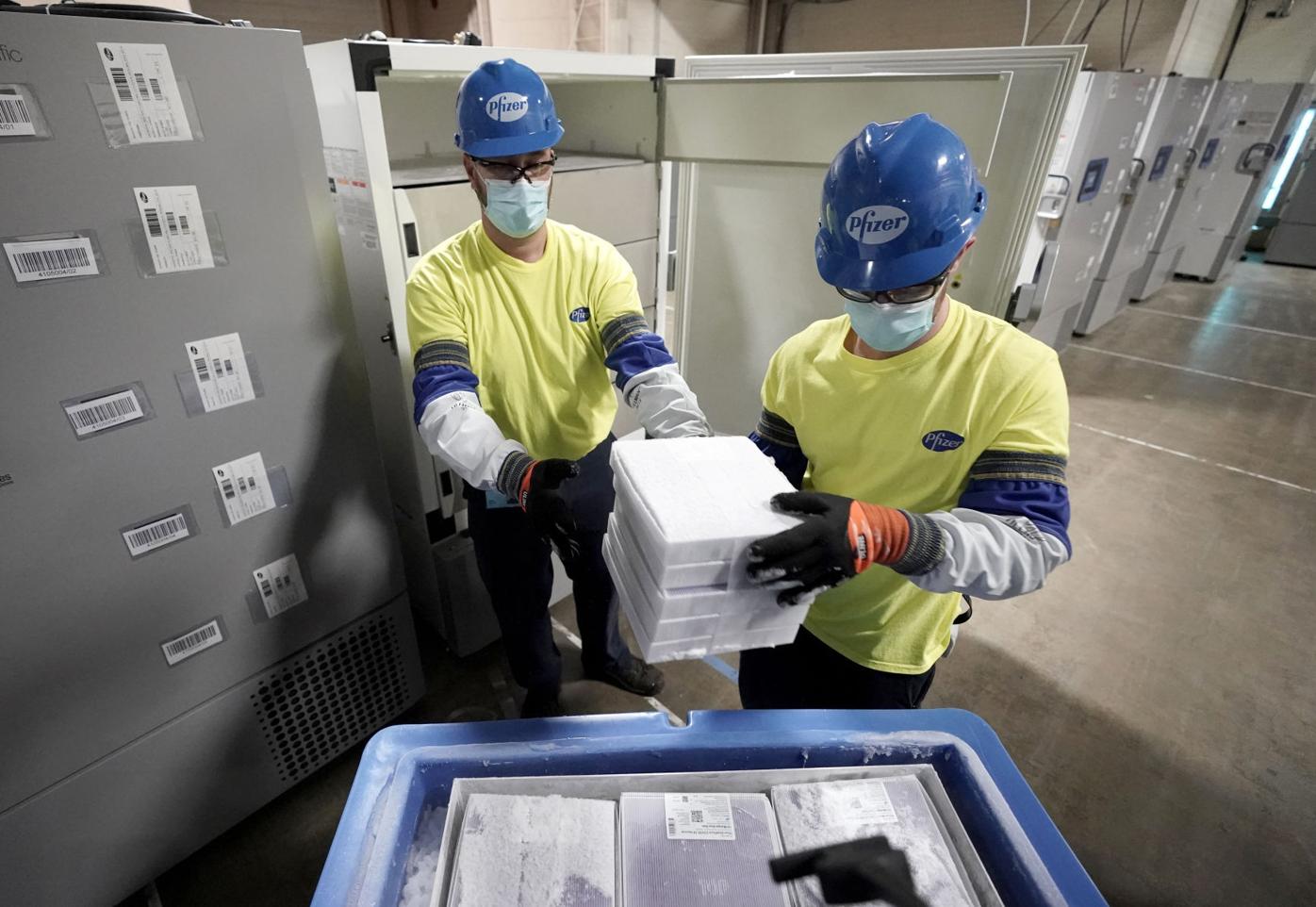 Boxes containing the Pfizer-BioNTech COVID-19 vaccine are prepared to be shipped at the Pfizer Global Supply Kalamazoo manufacturing plant in Portage, Mich., on Sunday, Dec. 13, 2020. A total of 11 North Carolina hospitals are slated to receive approximately 85,000 doses of the vaccine to distribute to frontline health workers and most vulnerable among the population. 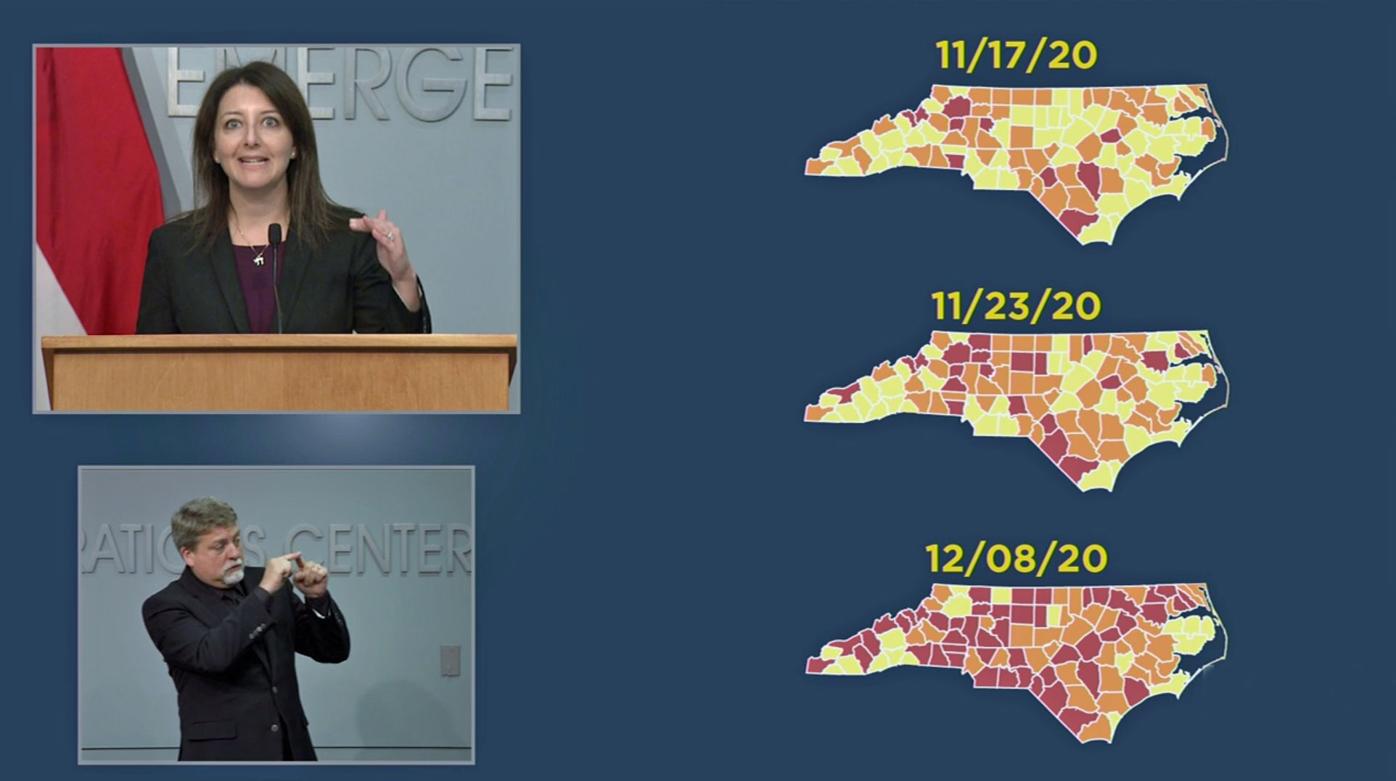 NCDHHS Secretary Dr. Mandy Cohen addresses the upward trend of COVID-19 spread in counties using the County Alert System during a December 8 media briefing in Raleigh. More than three-quarters of North Carolina counties are designated as either ‘critical’ (red) or ‘substantial’ (orange) spread.

The Pfizer-BioNTech COVID-19 vaccine is seen in a freezer after being delivered Monday, Dec. 14, 2020, at the Tampa General Hospital in Tampa, Fla. The first rollout of vaccines were delivered nationwide earlier this week after the Food and Drug Administration approved Emergency Use Authorization for the COVID-19 vaccine domestically.

Boxes containing the Pfizer-BioNTech COVID-19 vaccine are prepared to be shipped at the Pfizer Global Supply Kalamazoo manufacturing plant in Portage, Mich., on Sunday, Dec. 13, 2020. A total of 11 North Carolina hospitals are slated to receive approximately 85,000 doses of the vaccine to distribute to frontline health workers and most vulnerable among the population.

NCDHHS Secretary Dr. Mandy Cohen addresses the upward trend of COVID-19 spread in counties using the County Alert System during a December 8 media briefing in Raleigh. More than three-quarters of North Carolina counties are designated as either ‘critical’ (red) or ‘substantial’ (orange) spread.

NEWLAND — A ray of light at the end of the pandemic tunnel may potentially be in sight, as within the past week the Pfizer-BioNTech COVID-19 vaccine received Emergency Use Authorization by the U.S. Food and Drug Administration, with hundreds of thousands of doses making their way this week to frontline workers nationwide.

North Carolina was slated to receive an initial shipment of approximately 85,000 doses of the vaccine earlier this week, to be distributed among the following hospitals:

The FDA issued the first emergency use authorization for a COVID-19 vaccine for individuals 16 years and older on Friday, Dec. 11, setting the wheels in motion for the mass distribution machine to get under way.

Initial doses are scarce and rationed as the U.S. joins Britain and several other countries in scrambling to vaccinate as many people as possible ahead of winter. It will take months of work to curtail the virus, which has surged to unprecedented levels in recent weeks and already claimed 1.5 million lives globally.

“The FDA’s authorization for emergency use of the first COVID-19 vaccine is a significant milestone in battling this devastating pandemic that has affected so many families in the United States and around the world,” FDA Commissioner Stephen M. Hahn, M.D. said in a Dec. 11 FDA news release. “Today’s action follows an open and transparent review process that included input from independent scientific and public health experts and a thorough evaluation by the agency’s career scientists to ensure this vaccine met FDA’s rigorous scientific standards for safety, effectiveness and manufacturing quality needed to support emergency use authorization. The tireless work to develop a new vaccine to prevent this novel, serious and life-threatening disease in an expedited time frame after its emergence is a true testament to scientific innovation and public-private collaboration worldwide.”

According to officials with Operation WarpSpeed, the Trump administration’s vaccine development program, about 3 million doses of the Pfizer-BioNTech vaccine was expected in the first shipments across the nation beginning earlier this week. A similar amount is to be held in reserve for those recipients to be able to receive the required second inoculation.

Wake Forest Baptist Medical Center in Winston-Salem reported that it had received its initial shipment of 2,925 doses of the Pfizer COVID-19 vaccine at approximately 7:30 a.m. on Monday, Dec. 14, and that the vaccine is stored in a required ultra-low temperature (-80° C) freezer until it begins offering the vaccine to its frontline health care workers.

The hospital reported that it will follow a phased vaccine approach, aligned with federal and state guidance, to prioritize health care workers based on their likelihood of exposure.

“Tested, safe and effective vaccines will be available to all, starting with those most vulnerable to the virus,” NCDHHS Secretary Dr. Mandy Cohen said in a video released on Dec. 14. “Rest assured, you have a spot, and you’ll be able to take your best shot against COVID.”

While Avery County and surrounding communities await the widespread availability of a COVID-19 vaccine in the High Country, case statistics continue to trend upward.

As of Monday, Dec. 14, according to latest available dashboard data from the North Carolina Department of Health and Human Services, COVID-19 cases in North Carolina had continued its recent trend of increase, as the total number of coronavirus cases rose by approximately 40,000 cases over the previous week, with the state reporting 441,365 lab-confirmed cases of COVID-19.

In response to the continuingly increasing case trend, Governor Roy Cooper signed an executive order mandating a Modified Stay-at-Home Order, requiring that NC residents remain home from 10 p.m. to 5 a.m., with a number of outlines exceptions. The order took effect on December 11 and remains in place until 5 p.m. on January 8.

“As cases across the country continue to rise, we’ve seen rapid increases in our key metrics here in North Carolina,” Cooper said. “Our case counts have broken single-day records on three separate days in just the last week, and the percent of tests returning positive has increased to more than 10 percent. A month ago, we were deeply concerned to see daily case counts go above 3,000. Now we’re shocked that the number has doubled, with some daily counts at more than 6,000.”

The order requires that North Carolina residents stay at home from the hours of 10 p.m. to 5 a.m., and requires businesses to close by 10 p.m., with alcohol sales capped at 9 p.m. in an attempt to curtail mass gatherings to help slow the spread of the virus as vaccines continue the development, approval and distribution process..

The state has experienced an increase in hospitalizations of 313 individuals over the span of the past week, as NCDHHS reported on Dec. 14 that 2,553 people were hospitalized. NCDHHS reports an additional 295 North Carolinians have died related to the virus over the past seven-day period, as the agency reports a total of 5,855 overall deaths.

NCDHHS reported on December 14 that Avery County had topped the 1,000 total positive case mark, reporting a cumulative total of 1,165 positive community cases, an increase of 97 cases from the previous week. NCDHHS reports Avery with 13 deaths associated with the virus, but Toe River Health District reported in a December 11 release an Avery death, raising the cumulative total of COVID-19-related casualties reported by that agency to 19 in all.

NC Department of Public Safety reported on Dec. 14 that the local prisons have 385 total positive cases between Mountain View Correctional and Avery/Mitchell Correctional facilities, with 344 cases having recovered and one active case.

Avery, as well as Mitchell County, remains as two of 48 “red” counties listed as “critical” in association with the NCDHHS County Alert System which identifies the highest levels of community transmission of COVID-19 statewide.

“Public health staff is working to complete the investigations and they are contacting close contacts to contain the spread of disease,” TRHD reported. “The Yancey, Mitchell and Avery County health departments will keep the public informed by announcing any additional cases that may arise through our local media partners.”

According to latest NCDHHS Dashboard data on Dec. 14, Mitchell County reported a total of 692 positive cases, Mitchell County Health Department reported on Dec. 11 an additional county death, raising Mitchell’s virus-related deaths according to that agency to a total of 19. NCDHHS reports Yancey County with 793 total cases as of December 14, with four deaths.

Nationwide, Johns Hopkins University & Medicine reports more than 72.62 million cases of COVID-19 worldwide, with a total of 16,388,504 cases in the U.S. as of December 14. Johns Hopkins reports the United States surpassing the morbid milestone of more than 300,000 reported deaths nationwide, with more than 6,298,082 individuals across the country reported as having recovered from the virus.

The N.C. State Laboratory of Public Health, reporting hospitals and commercial labs report 6,016,031 completed tests as of Monday, Dec. 14, according to N.C. DHHS. The estimate of people presumed to have recovered from the virus as of Dec. 14 is more than 365,273 statewide, with the estimate provided each Monday afternoon by NCDHHS. NCDHHS estimates a median time to recovery of 14 days from the date of specimen collection for non-fatal COVID-19 cases who were not hospitalized, or if hospitalization status is unknown. The estimated median recovery time is 28 days from the date of specimen collection for hospitalized non-fatal COVID-19 cases.

Caldwell County has 4,544 positive tests as of Dec. 14 with 25 deaths, while Wilkes County has 3,220 reported cases and 66 deaths, according to NCDHHS Dashboard data.

NCDHHS reports McDowell County with 2,473 cases and 37 deaths. Burke County reports 5,125 cases and 71 deaths attributed to the virus, according to NCDHHS.

In Tennessee, Johnson County reports 1,626 cases with 26 deaths, while Carter County reports 3,568 cases and 75 deaths as of Dec. 14, according to statistics from the Tennessee Department of Health.