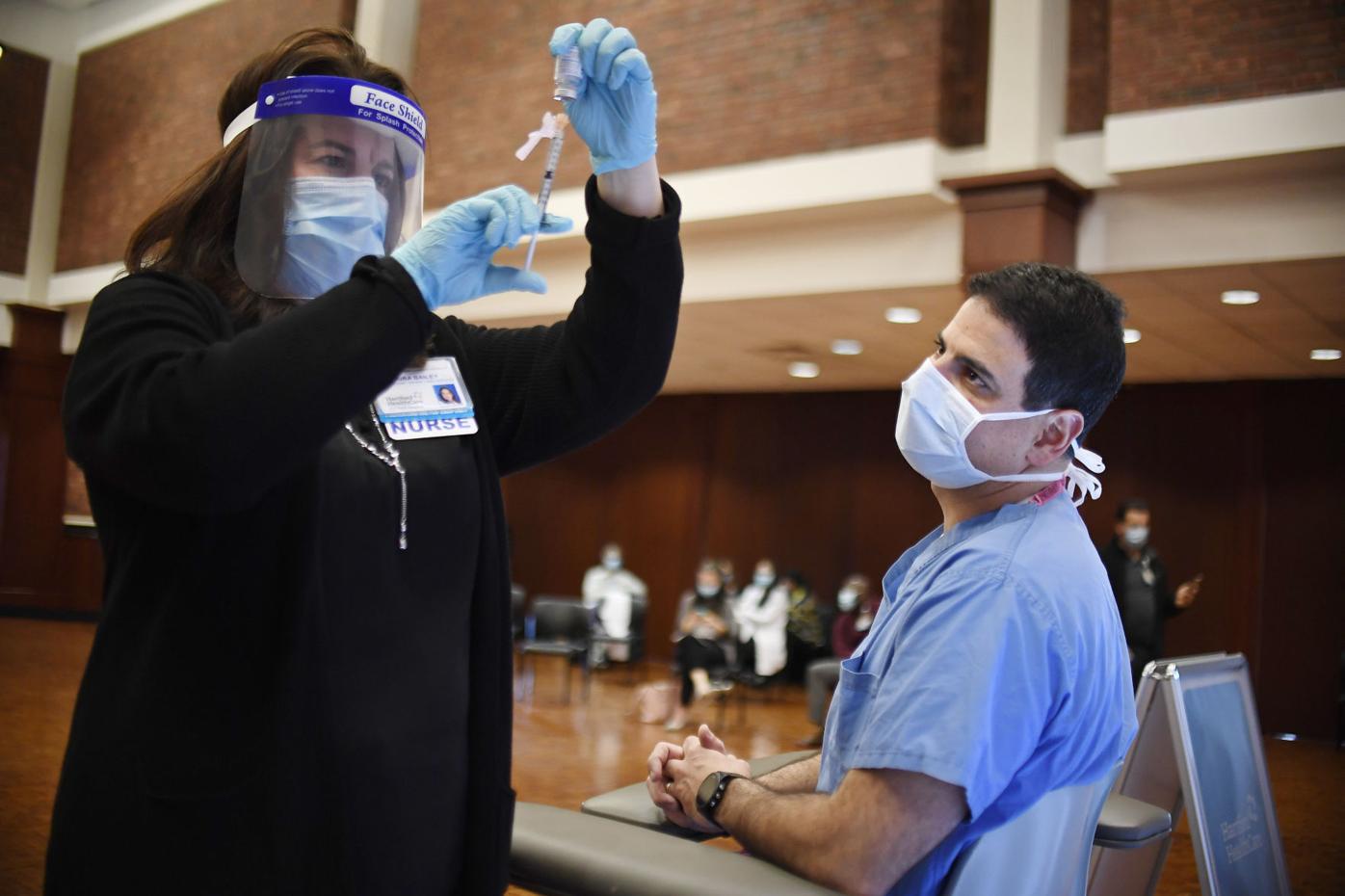 Nurse Laura Bailey, left, prepares the Moderna vaccine for COVID-19 to administer to Dr. Edward Hannoush at Hartford Hospital in Connecticut on Monday, Dec. 21, 2020. The Moderna vaccine is the second COVID-19 vaccine given Emergency Use Authorization by the FDA.

Nurse Laura Bailey, left, prepares the Moderna vaccine for COVID-19 to administer to Dr. Edward Hannoush at Hartford Hospital in Connecticut on Monday, Dec. 21, 2020. The Moderna vaccine is the second COVID-19 vaccine given Emergency Use Authorization by the FDA.

NEWLAND — As the county, state and nation continues to deal with the COVID-19 crisis over the holiday season, a second vaccine to assist in the battle has been approved for Emergency Use Authorization by the Food and Drug Administration.

Moderna’s vaccine may pose fewer challenges for distribution, as it does not need the same ultra-cold environment required by the Pfizer-BioNTech vaccine for storage. The Pfizer vaccine received Emergency Use Authorization by the FDA early last week.

The FDA authorized the Moderna vaccine for emergency use on December 18 after an agency advisory panel voted unanimously in favor of approving the vaccine earlier in the week.

According to media reports, Moderna reportedly has roughly 6 million doses of the new vaccine lined up for distribution in the U.S.

“With the availability of two vaccines now for the prevention of COVID-19, the FDA has taken another crucial step in the fight against this global pandemic that is causing vast numbers of hospitalizations and deaths in the United States each day,” said FDA Commissioner Stephen M. Hahn, M.D. “Through the FDA’s open and transparent scientific review process, two COVID-19 vaccines have been authorized in an expedited time frame while adhering to the rigorous standards for safety, effectiveness, and manufacturing quality needed to support emergency use authorization that the American people have come to expect from the FDA. These standards and our review process, which are the same we have used in reviewing the first COVID-19 vaccine and intend to use for any other COVID-19 vaccines, included input from independent scientific and public health experts as well as a thorough analysis of the data by the agency’s career staff.”

Appalachian Regional Healthcare System announced late last week that it would be receiving 800 doses of the vaccine to be administered initially to front line workers.

“We were told yesterday that our first allocation of vaccines will ship to us next week,” ARHS President and CEO Chuck Mantooth said on December 16. “So it appears that Christmas will come early. Our organization has been anxiously awaiting this news for several weeks. This is overwhelmingly good news.”

With the news of a second vaccine approved and widespread availability possible in the near future, Avery County and surrounding communities continue to see a rise in COVID-19 cases with the close of the year.

As of Monday, Dec. 21, according to latest available dashboard data from the North Carolina Department of Health and Human Services, COVID-19 cases in North Carolina had continued its recent trend of increase, as the total number of coronavirus cases rose by more than 42,000 cases over the previous week, with the state reporting 483,647 lab-confirmed cases of COVID-19.

An executive order remains in effect until 5 p.m. on January 8 that enacted a modified stay-at-home order for residents from 10 p.m. to 5 a.m., with a number of exceptions. On Dec. 21, Cooper signed Executive Order No. 183 allowing restaurants and bars to deliver or carry-out mixed beverages.

The state has experienced an increase in hospitalizations of 264 individuals over the span of the past week, as NCDHHS reported on Dec. 21 that 2,817 people were hospitalized. NCDHHS reports that deaths in the state attributed to the virus has eclipsed 6,000 total, with an additional 385 North Carolinians having died related to the virus over the past seven-day period, as the agency reports a total of 6,240 overall deaths.

NC Department of Public Safety reported on Dec. 21 that the local prisons have 386 total positive cases between Mountain View Correctional and Avery/Mitchell Correctional facilities, with 344 cases having recovered and one active case.

Avery, as well as Mitchell County, remains as two of 48 “red” counties listed as “critical” in association with the NCDHHS County Alert System which identifies the highest levels of community transmission of COVID-19 statewide.

“Public health staff is working to complete the investigations and they are contacting close contacts to contain the spread of disease,” TRHD reported. “The Yancey, Mitchell and Avery County health departments will keep the public informed by announcing any additional cases that may arise through our local media partners.”

According to latest NCDHHS Dashboard data on Dec. 21, Mitchell County reported a total of 795 positive cases, Mitchell County Health Department reported on Dec. 11 an additional county death, raising Mitchell’s virus-related deaths according to that agency to a total of 19. NCDHHS reports Yancey County with 913 total cases as of December 21, with eight deaths. TRHD reported four deaths over the previous week in Yancey County.

Nationwide, Johns Hopkins University & Medicine reports more than 77.31 million cases of COVID-19 worldwide, with a total of 18,017,492 cases in the U.S. as of December 21. Johns Hopkins reports the United States with 319,270 deaths nationwide.

The N.C. State Laboratory of Public Health, reporting hospitals and commercial labs report 6,419,622 completed tests as of Monday, Dec. 21, according to N.C. DHHS. The estimate of people presumed to have recovered from the virus as of Dec. 21 is more than 403,488 statewide, with the estimate provided each Monday afternoon by NCDHHS. NCDHHS estimates a median time to recovery of 14 days from the date of specimen collection for non-fatal COVID-19 cases who were not hospitalized, or if hospitalization status is unknown. The estimated median recovery time is 28 days from the date of specimen collection for hospitalized non-fatal COVID-19 cases.

Caldwell County has 5,115 positive tests as of Dec. 21 with 27 deaths, while Wilkes County has 3,510 reported cases and 67 deaths, according to NCDHHS Dashboard data.

NCDHHS reports McDowell County with 2,715 cases and 38 deaths. Burke County reports 5,549 cases and 74 deaths attributed to the virus, according to NCDHHS.

In Tennessee, Johnson County reports 1,715 cases with 27 deaths, while Carter County reports 4,011 cases and 76 deaths as of Dec. 21, according to statistics from the Tennessee Department of Health.