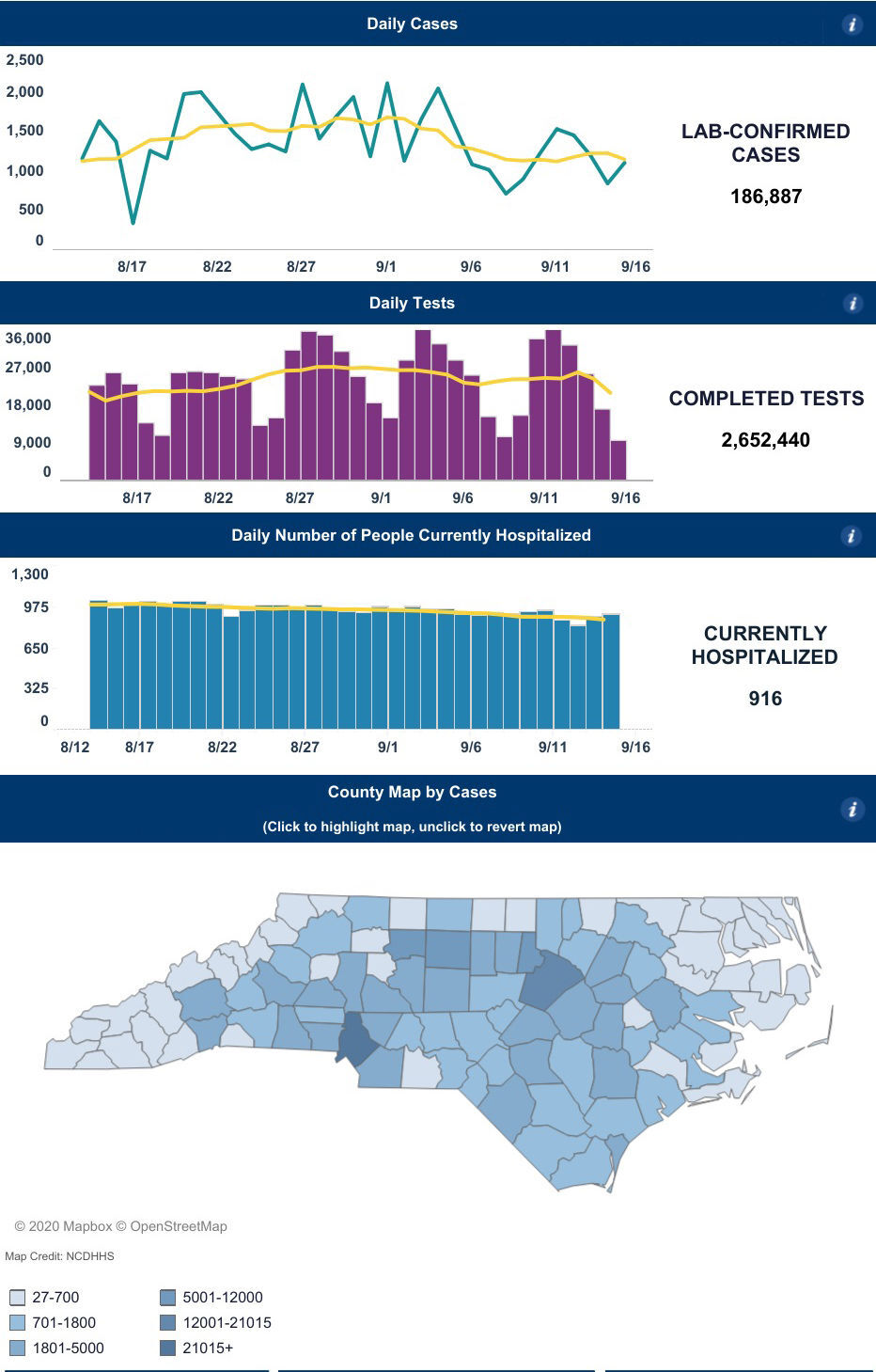 The NCDHHS COVID-19 Dashboard as of September 15 reports more than 900 hospitalizations and close to 187,000 confirmed total positive cases in the state due to Coronavirus.

The NCDHHS COVID-19 Dashboard as of September 15 reports more than 900 hospitalizations and close to 187,000 confirmed total positive cases in the state due to Coronavirus.

RALEIGH — As of Tuesday, Sept. 15, according to latest available dashboard data, COVID-19 cases in North Carolina had increased by approximately 9,000 cases over the previous seven-day mark, as the state has more than 186,887 lab-confirmed cases of COVID-19. The state has experienced an increase in hospitalizations over the span of the last week, as NCDHHS reported on Sept. 15 that 916 people were hospitalized, compared to 765 hospitalizations reported seven days earlier.

NCDHHS reports an additional 214 North Carolinians have died related to the virus in the same seven-day span, as the agency reports 3,111 overall deaths.

“Public health staff is working to complete the investigations and they are contacting close contacts to contain the spread of disease. To protect individual privacy, no further information about the cases will be released,” the Sept. 14 TRHD release stated. “The Yancey, Mitchell and Avery County health departments will keep the public informed by announcing any additional cases that may arise through our local media partners.”

Mitchell County on Sept. 14 reported two positive cases for a total of 157, with 147 having recovered, six active cases and four deaths.

Nationwide, Johns Hopkins University & Medicine reports more than 29.3 million cases of COVID-19 worldwide, with a total of 6,557,802 cases in the U.S. as of Tuesday morning, Sept. 15, with 194,674 reported deaths nationwide and more than 2,474,570 individuals across the country reported as having recovered from the virus.

The N.C. State Laboratory of Public Health, reporting hospitals and commercial labs report 2,652,440 completed tests as of Tuesday morning, Sept. 15, according to N.C. DHHS. The estimate of people presumed to have recovered from the virus as of Sept. 14 as 167,257 statewide, with the estimate provided each Monday by NCDHHS. NCDHHS estimates a median time to recovery of 14 days from the date of specimen collection for non-fatal COVID-19 cases who were not hospitalized, or if hospitalization status is unknown. The estimated median recovery time is 28 days from the date of specimen collection for hospitalized non-fatal COVID-19 cases.

In Tennessee, Johnson County reports 561 cases with two deaths, while Carter County reports 1,065 cases and 26 deaths as of Sept. 15, according to statistics from the Tennessee Department of Health.

Statewide, Mecklenburg County has reported the most cases with 27,021. Wake County is reporting 16,480 cases and Durham County reports 7,335 cases, according to Sept. 15 NCDHHS statistics. At least 47 of North Carolina’s 100 counties report at least 1,000 COVID-19 cases.