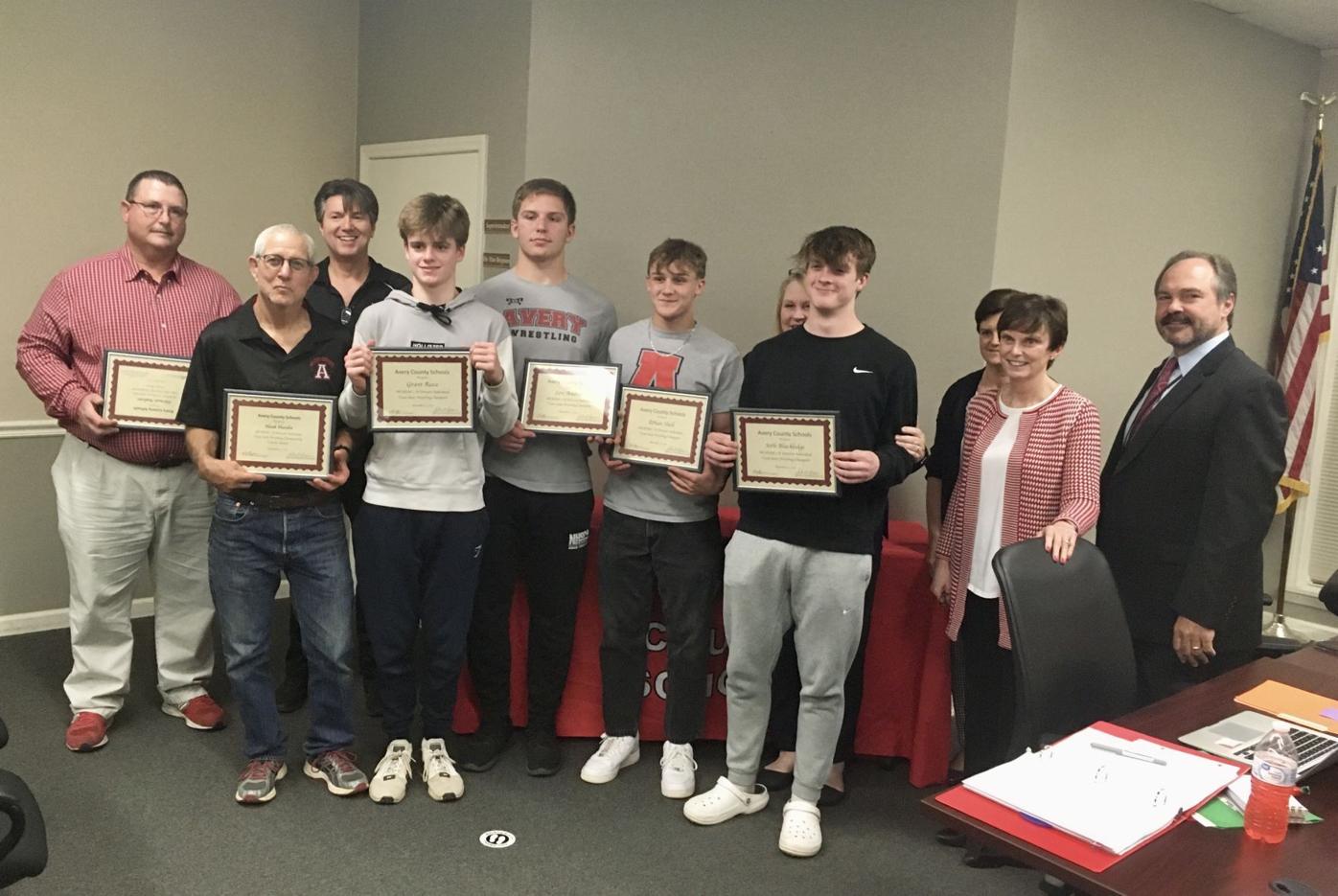 The Avery High School wrestling team was honored at the Nov. 9 Board of Education meeting. Recognized for their hard work and excellence were coaches Sherman Andrews and Hank Hardin, as well as wrestlers Grant Reece, Levi Andrews, Ethan Shell and Seth Blackledge. The honorees were joined by board chairman John Greene, Patricia Edwards, Kathey Aldridge and ACS Superintendent Dr. Dan Brigman. 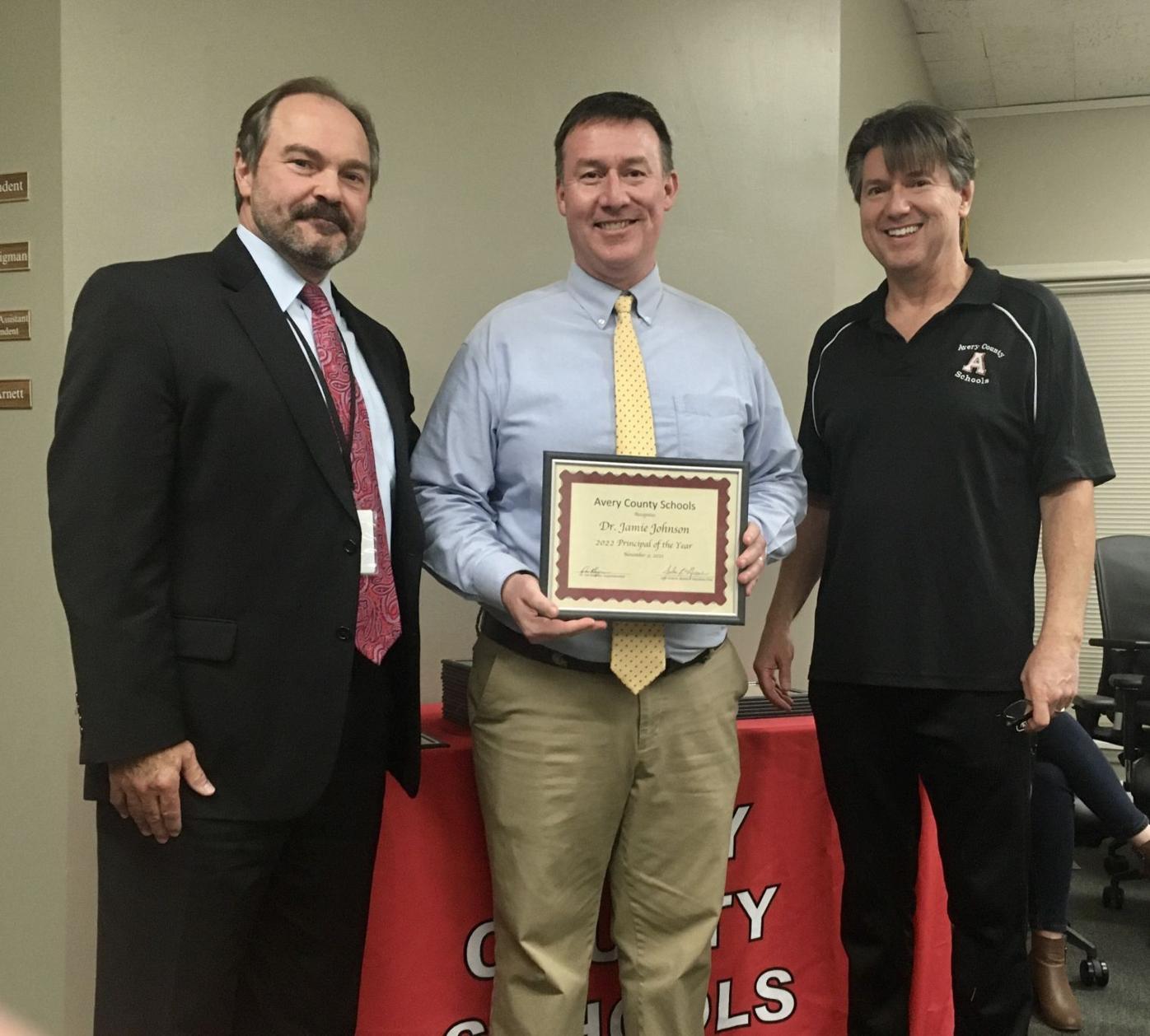 Honored as the Avery County Principal of the Year, Dr. Jamie Johnson (center) is joined by ACS Superintendent Dr. Dan Brigman and Chairman John Greene at the board’s November 9 meeting.

The Avery High School wrestling team was honored at the Nov. 9 Board of Education meeting. Recognized for their hard work and excellence were coaches Sherman Andrews and Hank Hardin, as well as wrestlers Grant Reece, Levi Andrews, Ethan Shell and Seth Blackledge. The honorees were joined by board chairman John Greene, Patricia Edwards, Kathey Aldridge and ACS Superintendent Dr. Dan Brigman.

Honored as the Avery County Principal of the Year, Dr. Jamie Johnson (center) is joined by ACS Superintendent Dr. Dan Brigman and Chairman John Greene at the board’s November 9 meeting.

NEWLAND – The Avery County Board of Education held its monthly meeting on Tuesday, Nov. 9, at Avery County Schools Central Services building where it honored exemplary student-athletes and welcomed a full house in attendance.

The meeting served as the principle session before the beginning of the busy holiday season and end of first semester.

The Vikings wrestlers identified included Appalachian State scholarship recipients, state champion competitors and team captains, along with other impressive qualifying athletic achievements. Coaches for the wrestling team were also acknowledged for their success and guidance of the young men.

The board approved multiple field trips at the meeting, including a quartet of wrestling tournaments both in state and out of state for the accomplished athletic performers.

Public comments were accepted in the early portion of the meeting. Board Chairman John Greene said of the aforementioned directives, “We welcome public comments and we love to see students and parents [at the meeting].”

Parent Dustin Trice advertised his continuous support and noted of the board that, “You guys have information that we as parents don’t have,” and appreciated the board’s “continued transparency.” Another parent, Kathleen Watson, demonstrated her approval of the board’s recent decision-making choices, mentioning that, “Parents are finding faith again in their board. I’m going to keep coming [to meetings] because I love the kids.”

Kerri Teague commented on what can be “cleaned up” in the Avery County education system and protocols, referencing the Code of Ethics displayed on the boardroom wall and printed on the meeting agenda.

Teague continued that the choice for masking initiated by the board was “such a gift,” yet claimed that there is a “disconnect between the school and the after school program.”

“Our ethics and morals need to be reflected in the after school program,” Teague concluded.

The board revisited the ‘Return to Learn’ Covid protocols with an update to action. The optional mask accord amendment in Avery County Schools was again approved by the board with future re-evaluations to occur as required by the state.

Teachers will also continue to facilitate students 18 years of age and older with voter registration at the high school as the policy outlines.

The current system, traditional or numeric class rank system, still uses GPA yet ranks students numerically for valedictorian and salutatorian honors. The proposed class rank system would begin with this year’s sophomores and would align with the Beta program.

“It helps students get recognition for college,” with “... focus on achievement, not competition,” said Ward.

ACS Superintendent Dr. Dan Brigman said of the proposition, “This would be a significant change,” while board chair Greene suggested that shooting for a No. 1 spot is a dynamic influence in motivation, stating that “Competition may drive achievement. There is only one No. 1.”

With legitimate concerns of uprooting the longstanding ranking system in the schools with an impactful alteration, the board wished to “ponder” the change, moving to table the decision until the board’s next regular meeting.

Budget change orders and updates with respect to the construction project on the high school were also presented at the meeting. Finance officer Jeff Jaynes stated that the capital budget will allocate funds originally set aside for the football field turf to add needed furniture, noting that the necessary funding for turf will be provided at a later date in order to move the associated funds to the furniture at the current time. A donation was also provided to the speech therapy department in order to improve its hearing test.

A total of five change order requests were presented at the meeting in regard to structural supplies, gas intake, electrical panels, a power outlet and the large red ‘A’ that will be mounted on top of a black panel.

“It will stand out. It is as big as a Buick,” Jaynes said of the new large letter ‘A.’